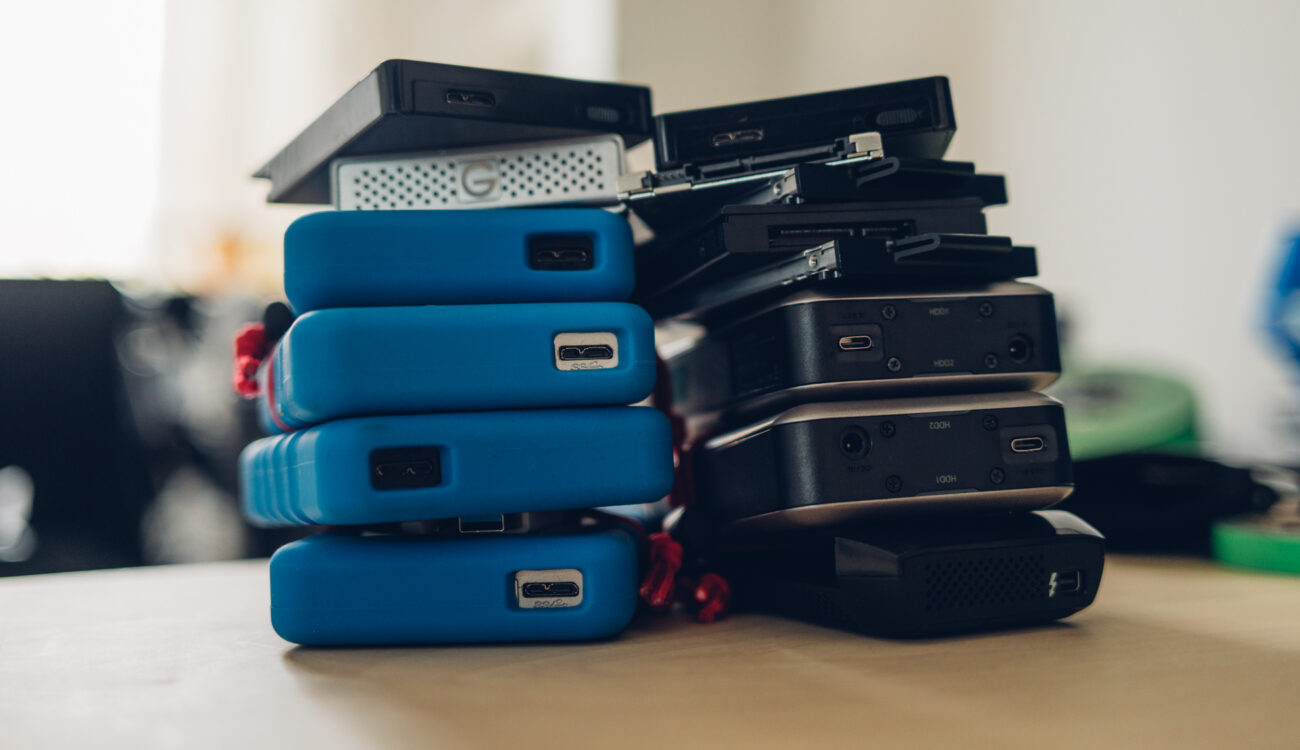 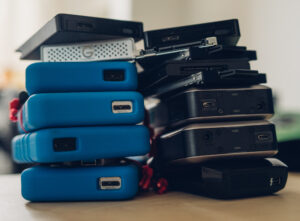 The evolution of modern filmmaking technology (4K, advanced data rates, multi-cam…) also comes with other considerations, such as the speed of on-site backup. It can be a right pain at the end of the day waiting for data to transfer onto multiple drives.

So let’s say you’re in the market for a couple of fast portable drives for on-set backup. The bad news is that just grabbing a set of Thunderbolt hard drives won’t solve your woes. There’s more to it than just picking a drive with a fast transfer protocol.

It’s a simple concept, and one I’m sure a lot of you know already, but I still encounter many people that don’t, so here’s the worst-kept secret of portable drives.

But first, a little preamble:

In this article I’m only going to discuss portable hard drives – by this I mean those that are bus-powered and don’t require AC power. On many occasions one will be backing up remotely, so a portable bus-powered drive is a must. 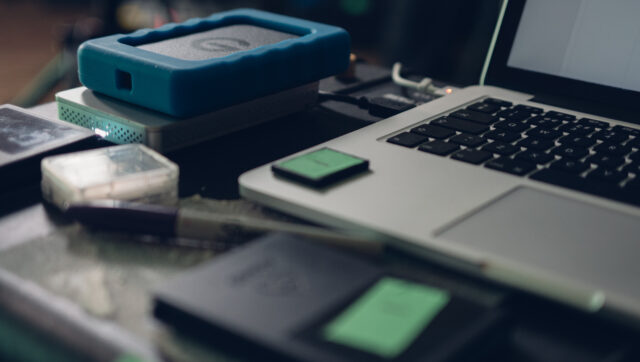 Often, people will just grab a Thunderbolt drive as this is a fast protocol, with Thunderbolt 2 offering up to 20Gbps. But this is only the maximum speed of the protocol if there is no other bottleneck along the data pipeline. The hard truth, however, is that there’s always another bottleneck.

Probably the most important factor is the speed of the actual hard drive. Portable hard drives are nearly always disks 2.5” in size, and these single spinning disks (i.e. non-SSD) won’t give you transfer rates much higher than 130MB/s.

You therefore must pick a hard drive that has a fast transfer protocol (USB 3.0, Thunderbolt 2) as well as a physically fast hard drive. 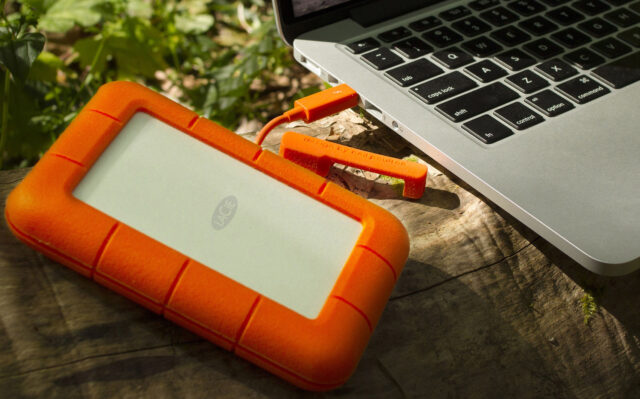 Basically speaking, a fast portable drive will be either an SSD drive (solid state drives that don’t spin) or, alternatively, a RAID-configured system of drives – a Redundant Array of Independent Disks.

The topic of RAID configurations can be an article unto itself, but for now I’ll simply mention RAID 0: a configuration that combines two drives to exploit their combined capacity and speed. Because of the need for multiple drives to form a RAID system, RAID 0 portable drives are actually quite scarce, but they’re starting to surface gradually.

SSDs used to be quite expensive, althought they’re gradually coming down in price. However, options above 1TB can still be quite pricey.

Without having a complete understanding of all of these aspects, trying to figure out which drives out there are fast can become overwhelming. This is largely due to manufacturers that continue to push buzz words like the maximum speed of the Thunderbolt protocol when trying to sell a new hard drive. Stick to your guns – if it’s not a RAID or SSD it usually won’t be a fast portable drive.

I’ll take the LaCie Rugged line as an example as it’s quite a clear product line, but you can do the same with any brand that has a large portable hard drive selection. 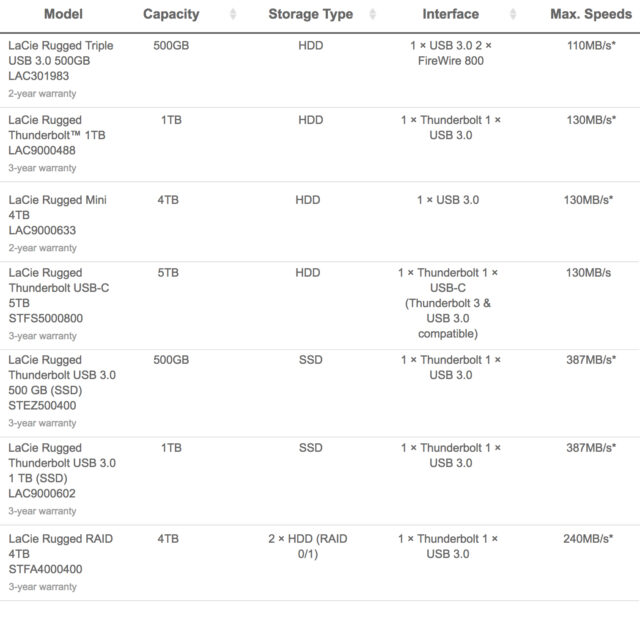 Look at the above spreadsheet, notice how the first four drives vary greatly in connection but nothing changes in terms of speed; nothing matters until you get into SSD or RAID 0 paired drives.

This is taken straight from the LaCie site so it’s not hidden knowledge, but it’s the type of info some brands mask using buzz words such as the transfer protocols USB-C is compatible with.

So, What Fast Portable Drive Do I Buy?

I personally like a portable hard drive to be north of 350MB/s in speed. I find this is an acceptable speed for fast, bus-powered on-site backups. However, more realistically I do tell productions for day-to-day shoots involving one or two 1080p cameras that anything over 200MB/s is acceptable.

Here are some drives I recommend: 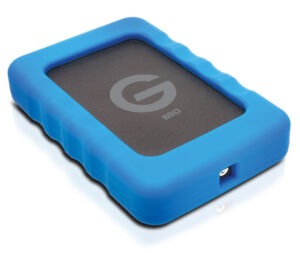 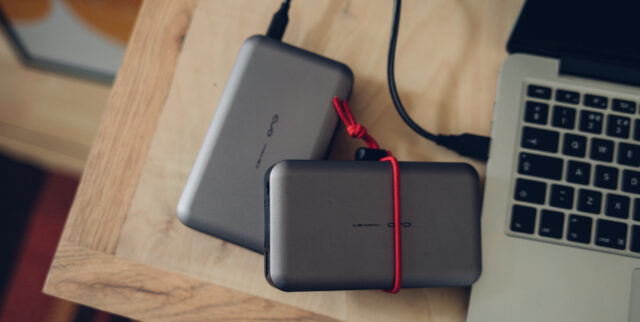 The last recommendation probably needs a little explanation. I’ve found this is a fantastic solution for on-site backup drives if you like a tiny bit of DIY – picking a cheap enclosure that is bus powered with a fast connection, then selecting your own hard drives to go inside.

The Mediasonic ProRAID enclosure has a USB 3.1 protocol via a USB-C connection and provides bus power for two 2.5” drives that can be configured to RAID 0 or 1.

In RAID 0 configuration, two off-the-shelf 1TB SSDs (like these 520MB/s Max write speed Samsung drives ) become a 2TB drive mass-sharing the combined speed. This setup will most-likely make your transfer protocol itself be the cause of any bottleneck – an overall nice problem to have.

A further advantage of this is you can select which 2.5″ drives you want in there: whether 1 or 2TB, SSD or spinning, you can make it as expensive and fast as you want.

In conclusion, always investigate the physical attributes of a hard drive, not just the transfer protocol.

A good, portable backup drive should be bus-powered, have a fast transfer protocol and house a fast physical drive.

If it’s not an SSD or can’t be configured in RAID, it’s likely to not be a fast portable drive.

If you’re unsure of the speed of your drive, the Blackmagic Speed Test app can be a great tool. It can also help locate particularly slow card readers and/or cables.

There are many options for portable on-site drives, so if you have any favourites I haven’t mentioned, please suggest them in the comments below.