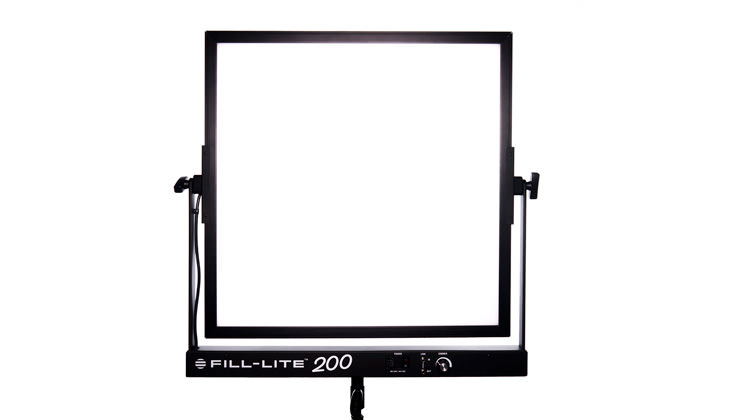 Sometimes it takes a long time until the manufacturers realize what filmmakers need. In the case of HDSLR’s it took an accident. The dots (multi light sources) in LED lights is another one of the more annoying things that doesn’t seem to go away. Until now! The Fill Lite is an LED light that is really laid out to be a soft light, the kind of nice lighting digital film often requires, especially when required to display female skin in an adequate way.

Up until now we’ve mostly seen the kind of LED lights made up of hundrets of little light sources causing numerous problems on film and not giving us the soft characteristics we’ve been used to from other soft lights.

The major problems of conventional LED light fixtures seem to be:
They cause multiple shadows, they have harsh characteristics and the glare is blinding the talents.

The Fill-Lite is about 4 times as big as a conventional LED light and doesn’t require a softbox to be soft as the surface is already a single light source.

Definitionmagazine.com took a look at the Fill-Lite at NAB this year and says:
If you’re looking for a natural soft light for location or studio use, have a look at Fill-Lite. It’s their first NAB and they brought along their 24in x 27in Fill-Lite 200 the foundation of their product line. LED light is the source so you have low power requirements. The panel is very thin and sits in a yoke incorporating all electronics onboard. These include options such as manual dimming, daisy chaining to link fixtures, battery or universal power, DMX 512 for studio, and even an iPAD app for wireless operation. The Fill-Lite 200 uses a ‘combo’ light stand pin for baby or junior applications. The LEDs have been selected for colour and performance. It compares favourably with the industry standard Diva Lite.

Unfortunately there doesn’t seem to be a pricetag at this time. It sure would be nice if these lights were affordable, but as usual with new technology it comes in steep.