Let’s imagine that I am a small, but quality, camera manufacturer. What could I do to increase my sales? My business logic would drive me to look for a niche where my products shine, allowing them to sell more than they would elsewhere. When looking at the current DSLR/Mirrorless market, we can safely assume that my logic is completely twisted and worth nothing.

If I was right, companies like Fuji, Pentax, Olympus, and Sigma would have spotted the trend of shooting video with photo cameras in time to ask their engineers to produce a product for that market—putting them in the spotlight for aspiring movie makers. Because none of these companies have an upper-level video market to protect, is that too much to ask? 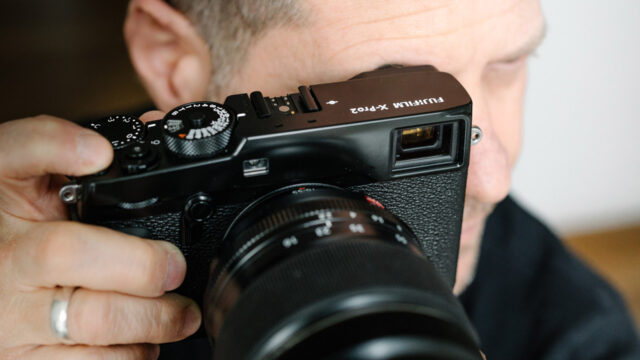 That’s why I was excited to get hands-on with the new Fujifilm X-Pro2 Mirrorless Digital Camera. Previous Fuji cameras didn’t show much hope for video quality, but with the X-Pro2, I was extremely curious and wanted to try out a camera from a manufacturer whose products I have not used before. After all, we’re blazing through 2016 and with the market declining (but no less competitive), I was interested in finding out if my business logic was still “wrong.” 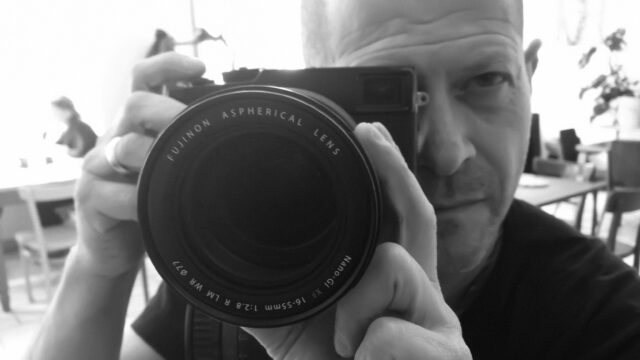 First of all, I must take my hat off to Fujifilm for not pretending that they have created an “amazing broadcast quality camera” as so many marketing teams have done before. On the contrary, the video features of the X-Pro2 are well hidden in the official publication. Within the camera’s menu, the video page is the shortest I think I have ever seen—choose a MOVIE MODE (1080 up to 60p), MIC level adjustment (more on that later), MIC/REMOTE RELEASE, and… well, that’s it! All other features (focusing mode, white balance, saturation, etc.) must be found from within the still image menu.

Make no mistake; the X-Pro2 is a photo camera that can (in a “by the way” fashion) shoot HD video. 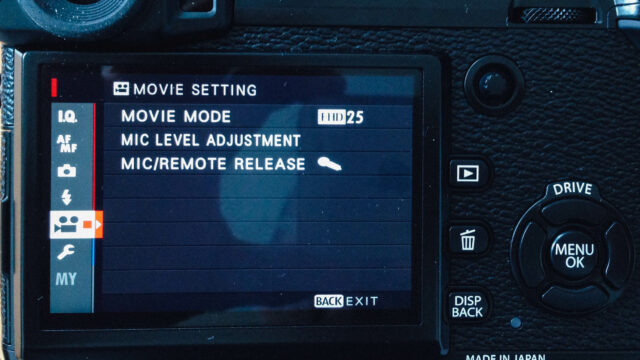 The X-Pro2 is built like a little tank. While it is robust and weather-sealed, it feels decent in your hand—in fact, it reminded me of holding a “mini” Leica SL. Of course, it took me a while to get familiar with its structure and button layout. I’m still not entirely sure how photographers operate this camera, but for video shooting, it was a bit uncomfortable. I would say that you should take my opinion on the camera’s ergonomics with a pinch of salt—it could be that spending more time with the camera would make the layout feel comfortable, perhaps even natural. If you are coming from a PAL country, on the mechanical shutter wheel you won’t find the number “50”. This can be achieved electronically by turning (a different) front wheel 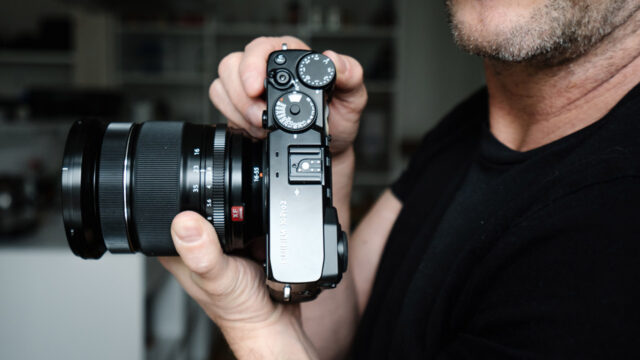 I’ll start with charging the battery. How many times you put a battery in the charger to charge and the light goes green immediately? That was a bit confusing. Apparently, in Fuli’s philosophy, green light is “charging” and no light is “battery charged.” Way to take a global standard and flip it on its head!

As this is my first encounter with a Fuji camera, I did stumble a bit at the beginning with the X-Pro2’s buttons and menu structure (God forbid, I even looked at the camera manual once or twice). However, after getting used to it, my two major concerns when working it are as follows:

There are other limitations that should be taken into account. You get the 16×9 video aspect ratio only AFTER pressing the REC button. Autofocus is truly good, but not in the continuous mode. On the positive side, EVF is nice and easy to work with (although it’s going to be next to impossible to change the rubber eyepiece to a better, more comfortable one) and the light meter is easy to work with—and effective. 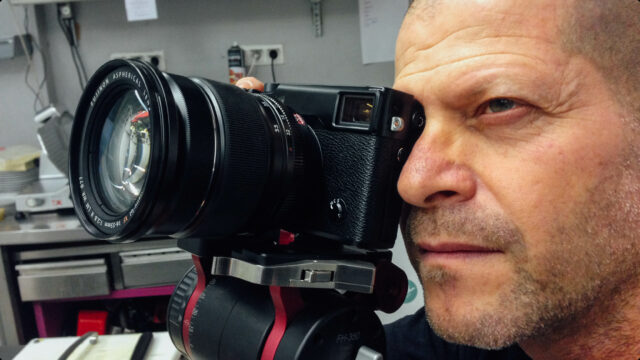 There is something very pleasant in the aesthetics of the pictures this camera can produce. It is sharp and detailed. On the other hand, Moire and aliasing are very present in the finer details of some shots. Also, noise will kick in very fast when using ISO 1000 and above.

As requested by many, Moire and aliasing sample footage. 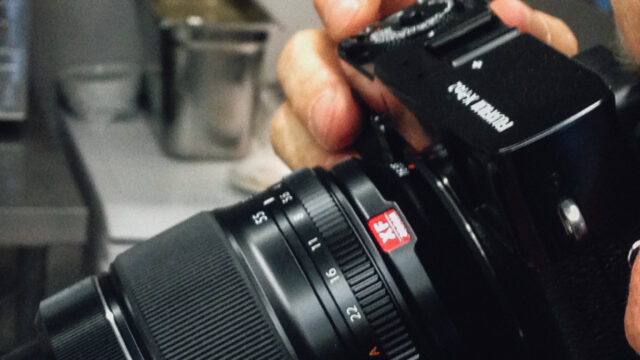 Regarding the lens used in this video, the Fujfilm XF 16-55mm f2.8 R LM WR. It’s Fujinon’s flagship “XF standard zoom lens” with a focal length equivalent to 24mm – 84mm and a constant F2.8 aperture throughout the range. Here is a quick list of the Pros and Cons I found while combining it with the X-Pro2:

Note: The combination of the Fujifilm X-Pro2 and the Fujinon XF 16-55mm f/2.8 lens is nice, as long as you work from a tripod. The minute you take the camera in your hands, be prepared to witness annoying micro-shakes. Neither the lens or camera body has a build in stabilizer to compensate those. 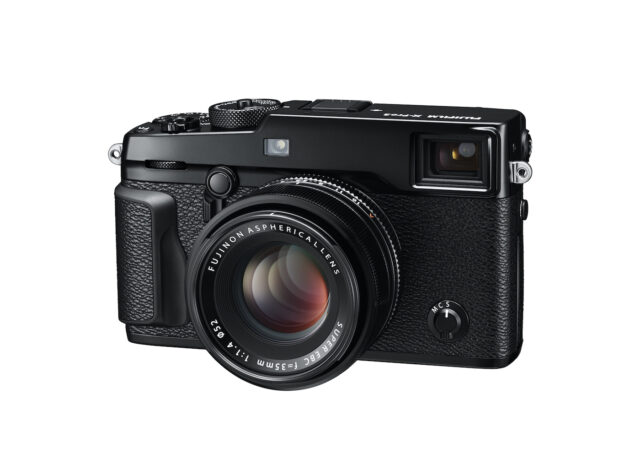 The Fujifilm X-Pro2 is a nice addition to Fuji’s camera line and if they are looking to capture the attention of film makers, that camera is definitely a (small) step in the right direction. If they want to compete well in this sector, against more established companies, it shouldn’t look as if the video function was “accidentally implemented” as it does in the X-Pro2.

I hope that functionality, image quality, sound, and resolution can seriously be considered by Fuji as legit when it comes to shooting videos with their future cameras. After all, they have the potential to deliver the best next thing. It’s only a matter of taking the decision to develop it!

Will you be considering buying the Fujifilm X-Pro2 for shooting videos? Please share your thoughts in the comments section below

About the above video: Shot in 1080/25 mostly in up to ISO 800 (basement shoots were taken in ISO 1000). “Picture profile”- “Pro Neg. Std”. Edited in Adobe Premiere CC latest edition. No color correction was done, but there was a minor change in exposure in 2 shots. The audio was recorded in camera and was later treated with audacity to help with some of the excessive background noise at the restaurant. (Sorry about the knife “loud knocks” at the background. Chef assistant was busy making lunch)….

Thank you to Andreas, Julian, and the entire Otto Bauer restaurant staff for their help and contribution for that short video.