The new FUJIFILM X-T4 has just been released, promising to be one of the more interesting cameras to be delivered during 2020. If you are like me, an owner of the FUJIFILM X-T3 who wished for a little extra, then the wait is over. Enhanced performance, combining the advantage of the now discontinued X-1H (stabilised sensor) and articulating LCD screen, can now be found within this newcomer camera. Prepared to be impressed by what seems to be the best all around small and lightweight APS-C sensor camera that can shoot video, currently in the market? 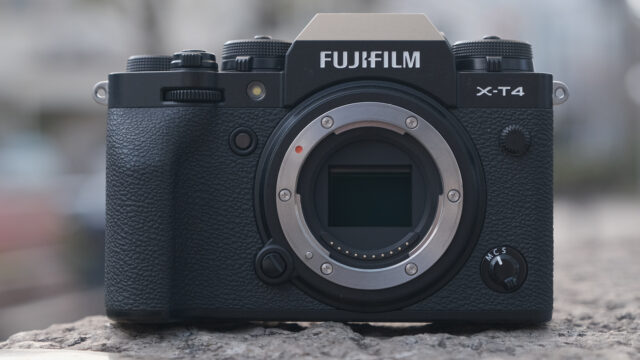 For the last few weeks, I’ve been running and gunning with the new FUJIFILM X-T4 camera, and let me tell you, the great X-T3, just got (much) better! If I have to summarise my experience while working with that new camera, I would write PURE Joy. It is not even about a specific feature or certain specification. It is about the overall usage and camera flexibility. Let me say it loud and clear, for documentary filmmaking, it is currently one of the best tools out there!

If you want to watch my mini documentary “Arisa”, which was shot entirely on the new FUJIFILM X-T4, click here.

FUJIFILM X-T4 –  What is New (in No Particular Order)

FUJIFILM have done its homework by listening carefully to feedback from the field. They have merged their two successful camera lines, the X-T3, and X-H1, into one winning product. I mean, I hope you can agree with me that both cameras were aiming to capture the attention of a similar audience, us the filmmakers. Each had its advantages and limitations, which – at times – might have caused a bit of hesitation in regard to which camera to get. On top, I can only imagine that like with so many other manufacturers in our field, resources at FUJIFILM are limited, so it is better to consolidate manufacturing lines and concentrate on bringing a winning product that combines goodies from both worlds to the market.

So, what did FUJIFILM bring to the table, in order to make that camera so likable? Well, first of all, they kept (almost) all the good stuff one can find inside the X-T3. Here is a short list of what is untouched:

It is also worth noting that the X-T4 inherits the 26.1 MP “X-Trans” sensor and “X-Processor 4” found in the X-T3. The difference in performance lies in the better configured written algorithm.

So those are ALL there. But what really makes this camera even more capable is the inclusion of some new features like: 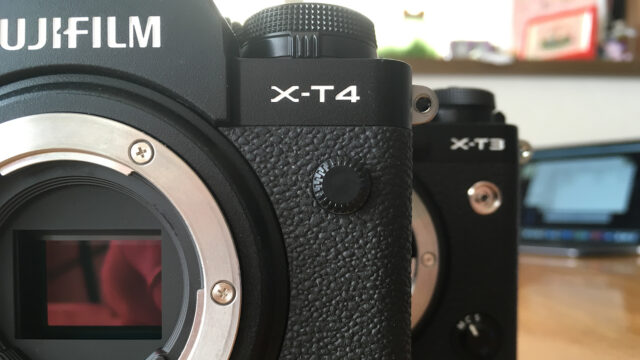 For the last few weeks, I was lucky enough to work with the new FUJIFILM X-T4 and as I wrote above, it was pure joy. I think what makes this camera so special is its greater flexibility and performance (similar but in many ways better than the X-T3).

The real deal with this camera is to see how well the IBIS is functioning. Many current cameras are doing it right, but somehow, in my opinion, FUJIFILM is doing it a bit better. There are three stabilizing modes:

Out of those 3 stabilization modes, my favorite is the “IS Mode Boost – on” for the following reasons:

In fact, despite FUJIFILM’s advice to use this mode when filming static shots, I decided to try it when moving, especially when following people. The results I got were promising. I would say that with a little practice, the movement fluidity can be almost “gimbal-like”, but with the twist of being a bit on the “rough side”. What I’m trying to say is that personally, I don’t like to use gimbals when filming documentaries, as the result are too smooth for my taste (besides the fact of having additional equipment). I’ll go even further by saying that too smooth movement somehow contradicts my style of documentary shooting. I will always prefer rougher movements that synchronize nicely with the object I’m filming. The FUJIFILM X-T4″ IS Mode Boost – on” is offering me just that. Combined “smooth” and “organic” movement. 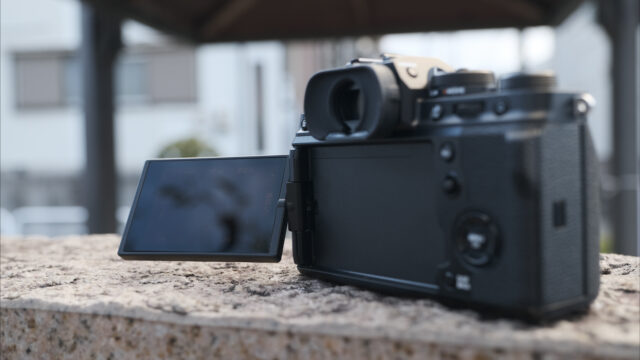 Autofocus will work fine MOST of the time UNLESS when shooting in low light with F-log turned “on”. FUJIFILM’s recommendation is to turn F-log “off” during lowlight conditions. From my experience, leaving F-log “on” and shooting in lowlight, might result in getting “microfocus movements” that can distract a lot! (Very noticeable mostly in the background of the filmed object.)

In one word, excellent! One can simply use ANY desired ISO the camera offers and achieve absolutely acceptable results. The native ISO is still 640, and going all the way up to 12,800 is a breeze. It’s not that there is no noise at all, but in many situations, that noise won’t disturb and cause the footage to be unusable at all.

More features (like IBIS) are always translated into consuming additional power, so FUJIFILM has decided it was the right time to move on and introduce new batteries to their upcoming X-T4 camera.

Those current new batteries are 2200 mAh (16Wh) as opposed to the older 1250 mAh (8.7Wh). In reality, the camera will run longer, but of course, consume more power. I can safely say that with 3 batteries, I could finish a “normal” shooting day (whatever “normal” is)…

I was pleasantly surprised to see how well the new X-T4 handles the rolling shutter. My opinion is based on what my eyes can see, and NOT on our lab test, so please stay tuned. Our X-T4 lab test will follow soon. 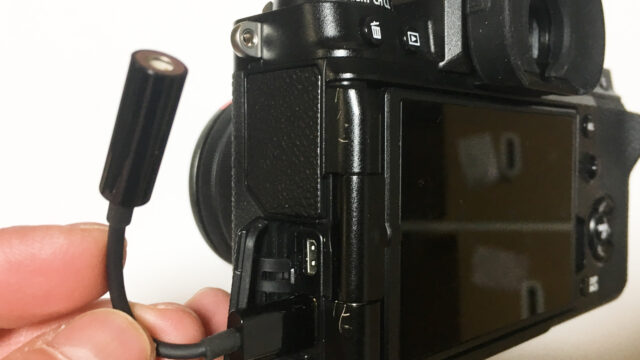 The X-T4 keeps all the advantages of the X-T3 when it comes to sound quality, but brings one operational obstacle. The 3.5 headphone plug has been replaced with a USB-C connector. Needless to say that when I saw this solution first, I got uncomfortable about it, but what helped to “ease the pain” was the fact that FUJIFILM is including a USB-C to 3.5mm short cable in the box. As a side note, I found my own (non-professional) cable placement solution, and after plugging it into the camera, I never had the reason to disconnect it again. That solution held well from day one till today and I filmed with it in rain, sun, snow and sand. To cut a long story short: everywhere.

By the way, if you ask yourself why FUJIFILM gave up on the 3.5mm headphone socket, it is not because they were not aware of our needs, but rather a physical placement issue after adding the IBIS to the camera. If you really miss this 3.5mm mini plug, you can find it in the camera grip accessory (sold separately). Personally, I wouldn’t invest in buying this grip as I didn’t miss the “in-body” 3.5mm headphone jack at all and that grip cannot serve as a charger.

Mind you that 2.5mm camera control has moved from the right hands’ side ( X-T3) to the left-hand side.

The FUJIFILM X-T4 will be selling for $1700 ($200 more than the X-T3 when not discounted). Its availability is scheduled for March 2020. No word if the X-T3 will continue to be sold in parallel to the new camera. 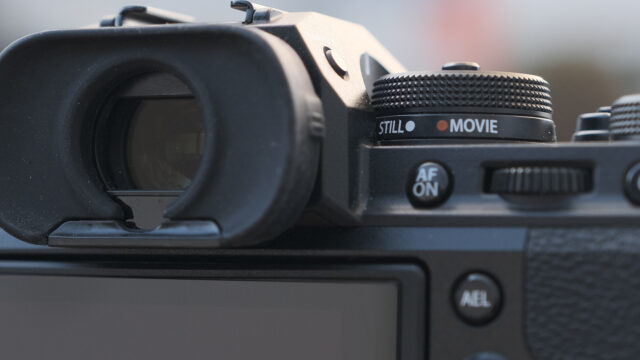 The FUJIFILM X-T4 is currently the best APS-C camera that can shoot video in the market (and in all honesty, with its functionality and picture quality it can easily challenge many of the more expensive full-frame mirrorless cameras out there). This camera can be deployed in a large variety of productions, but if you are like me – a documentary filmmaker who travels a lot and has equipment weight and luggage size in mind – this camera might prove to be very useful to you. On top, having IBIS on board (and a really good one), opens the door for much more handheld work which was less possible before, with the X-T3. Even using FUJIFILM’s own MKX lenses seems to be much more attractive now.

Long ago, I stopped encouraging others to buy new equipment, nevertheless, for me, it is time to say “goodbye” to my beloved X-T3 and say “hello” to the new X-T4. As a documentary filmmaker, this is the tool I’ve been waiting for. Small, lightweight, capable in producing beautiful footage, relatively affordable (for what it can do) and simply fun to use.

Watch my documentary shot on the FUJIFILM X-T4 here!

All in all, well done FUJIFILM. 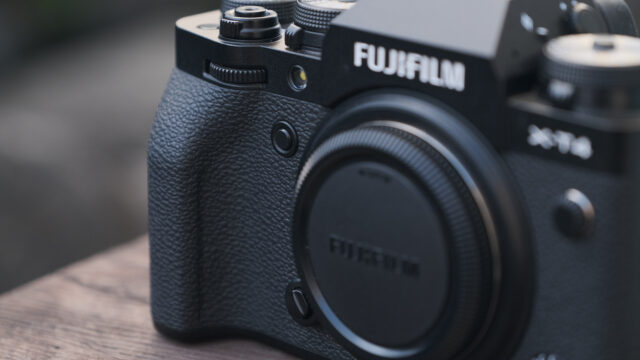 Music courtesy of MusicVine.com – Get 25% off any Pay-Per-Use license with code C5D25 (valid for one use per customer).

What do you think about the new FUJIFILM X-T4. If you are in the market for a new mirrorless camera that can shoot high-quality videos, will you consider getting it? I’m also very curious to hear from owners of FUJIFILM’s X-T3, in particular, if you’ve had some AF-C issues.