The new FUJIFILM X-E3 is the latest edition to the ever growing family of FUJIFILM’s X-mount line. This APS-C sensor-sized, mirrorless stills camera, can shoot high quality 4k (UHD) video and, dare I say it, is the best they have produced so far! As a reviewer, I had the chance to work with the X-PRO2, X-T2, X-T20 and the GFX 50S. While all produce nice looking images, the new X-E3 sets itself apart from the crowd by offering greater ease of use (mostly due to the added focus lever and LCD touch screen), enhanced autofocus capabilities and very pleasing video quality. Read on for my FUJIFILM X-E3 review. 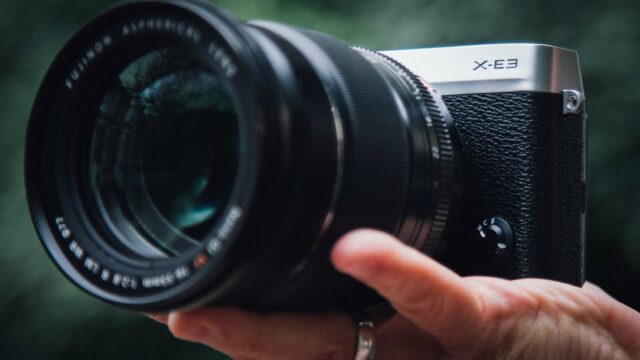 FUJIFILM was kind enough to supply me with a production sample that I could use and explore for a few days; here are my findings from my FUJIFILM X-E3 review:

The first thing I noticed when taking the camera out of the box was how light-weight it is, to the point of not being sure if FUJIFILM had decided to pull my leg and send me an empty camera shell! In a world where every gram counts, particularly in relation to international travel, this is a big advantage. 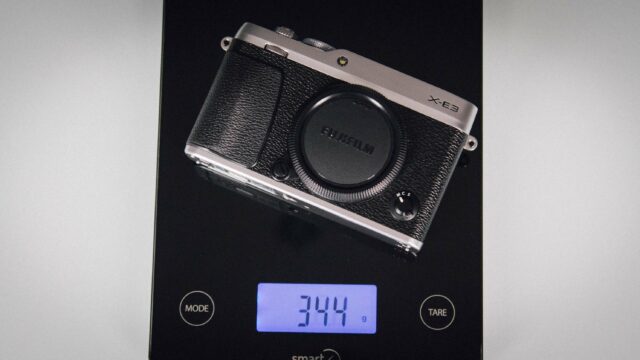 Next was the right hand grip. For my small hands the camera was very comfortable to hold. The combination of the back button layout and the new responsive focus stick made it very easy to use. The front focus mode selector (Manual/Continues/Single) is also located in a very logical place. Flip that physical button, and your desired focus mode is ready to function in a split second. 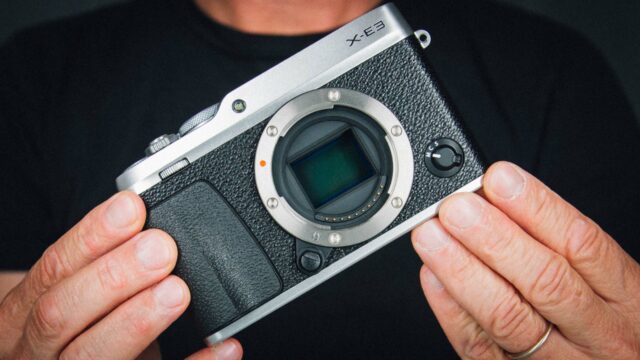 The focus lever was works almost perfectly when using it in conjunction with the autofocus mode. You simply place the little square where you want your focus to be (also possible during filming) and the lens will take you there. In general, the autofocus system worked like a charm most of the time. Gimbal users would definitely benefit from the continuous AF mode found in this camera.

The new LCD screen is bight enough to be used outdoor but, more importantly, can be set to become a “touch screen” panel. Changing between focus points by simply tapping on it was a very positive experience. When it comes to down sides, the LCD screen is fixed, so filming from anything but your eye level becomes a challenge. 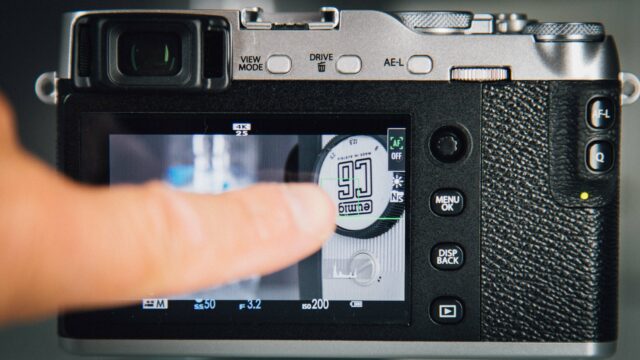 FUJIFILM X-E3 – Tap on the LCD to focus

Maybe the biggest downside of this camera is the lack of image stabilisation, so remember to pair your camera with a stabilized lens if you are planning to shoot a lot of handheld footage. 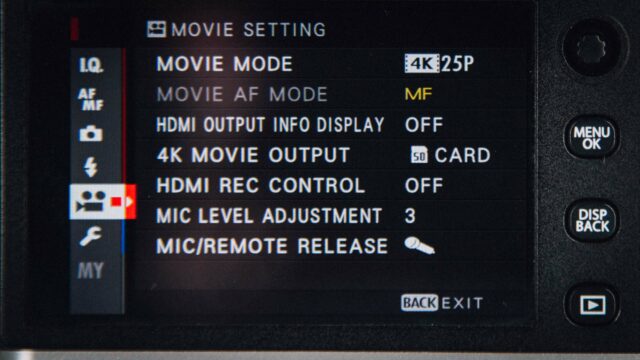 The FUJIFILM X-E3 maintains the menu structure found on other recent FUJIFILM cameras but, like in the past, if you are looking to change any less common parameters, you will have to dig for those in other menus. Saying that, I must admit that in reality assigning customizable FN buttons is very easy, so I did not find myself constantly digging into the menu, allowing me to concentrate on filming. By the way, the LCD itself can become assignable (equivalent to 4 FN buttons) and all you have to do after assigning a gesture to it is swipe in one of the four directions.

When it comes to video frame rates and resolutions, the FUJIFILM X-E3 offers different frame rates depending on whether you are recording in UHD 4K, full HD or HD resolutions. Unfortunately, the maximum you can shoot in UHD 4K is 29.97. Note that this is a “world camera” so changing between 50Hz and 60Hz frame rates is very easy.  While I did not test the quality of any of the 1080p shooting modes, to my eyes this camera produces the best image coming out of any other FUJIFILM camera currently on the market. True, it is only 100 MBit/s in 4k (UHD) but the color fidelity feels very robust. 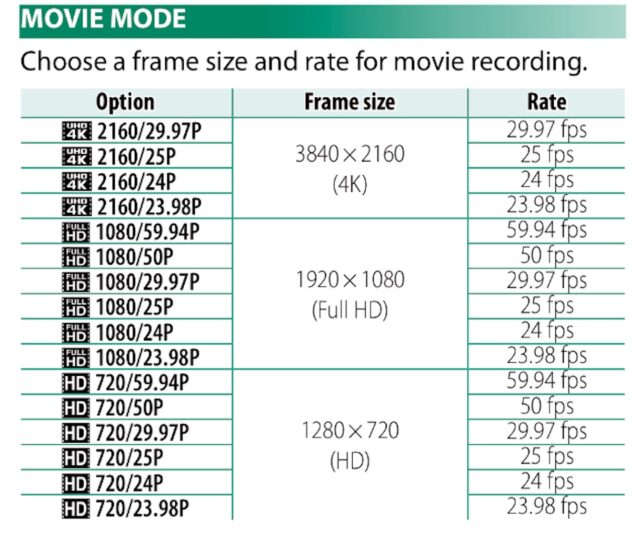 One setback that should be taken into consideration when shooting in 4K, is the restricted 10-minute recording time (15-min in full HD and 30-min in 720p). And while on the subject of restrictions, bear in mind that this new camera does not support F-log, either internally or externally, leaving you with only the FUJIFILM film stock simulations instead.

On the audio side, this camera is very similar to the FUJIFILM X-Pro2 (see my review here) and X-T20 (see my review here) with a 2.5mm remote/audio microphone jack and no headphone socket, it leaves a lot to be desired. On the positive side, audio levels can be adjusted while recording. 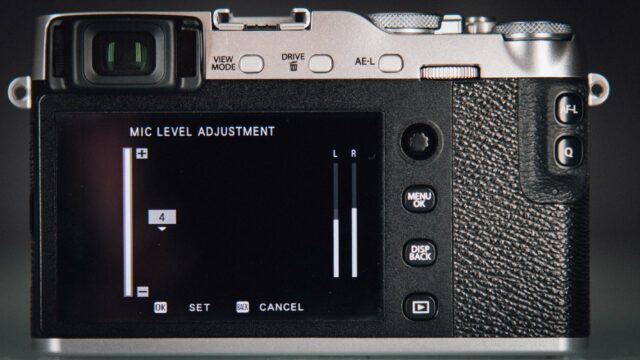 I’ll start with charging the battery. This is something that I keep mentioning across all of my other FUJIFILM camera reviews: how many times have you put a battery in the charger to charge and the light goes green immediately? That was the case (again) here and it was a bit confusing. Apparently, in FUJIFILM’s world, a green light means “charging” and no light means “battery charged.” Way to take a global standard and flip it on its head! 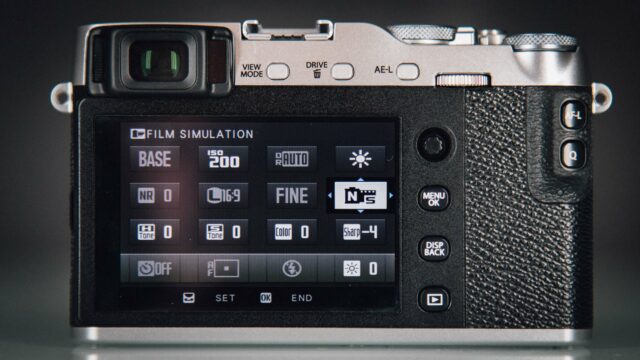 By now, I’m pretty familiar with the FUJIFILM menus and I must say that assigning video related functions to the various buttons, and in particular the ‘Q’ button, is very straight forward. The ‘Q’ button really will become your best friend when fast access to the different shooting parameters is needed.

It was also a pleasant surprise to find out that I could finally change my viewing method between LCD and EVF while recording, WITHOUT being stuck on the one I chose to use last, BEFORE pushing the record button. Sounds like a minor improvement but in reality, when filming and constantly changing between looking at your subject on the LCD and then EVF, this little feature finally becomes on a par with most other cameras on the market.

When it comes to lowlight recording, ISO 3200 and anything below is VERY clean (ISO 6400 is still OK, with some noise in the shadows). The EVF is very nice and easy to work with and the light meter is accurate and effective. 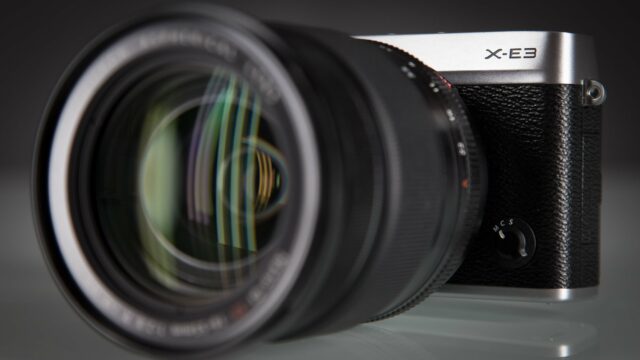 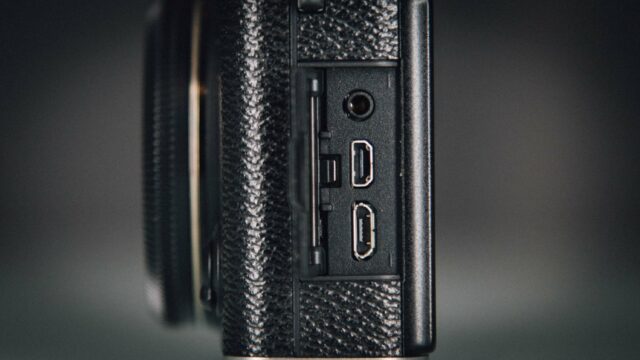 The lens used in this FUJIFILM X-E3 review was the FUJIFILM XF 16-55mm f2.8 R LM WR. It is on of FUJINON’s flagship “XF standard zoom lens” with a Full Frame focal length equivalent to 24mm – 84mm and a constant f/2.8 aperture throughout the range. Here is a quick list of the Pros and Cons I found while combining it with the X-E3:

During my FUJIFILM X-E3 review, I found the X-E3 to be the best mirrorless stills camera that can shoot video FUJIFILM have ever produced. It offers an excellent combination between affordable price, video picture quality, fast accurate autofocus in video mode and portability. It’s a pity that FUJIFILM did not include log picture profile support, as this would have made the camera truly shine! If you are on a budget and looking for an affordable high-quality camera that can shoot video, this is a camera for you to consider. On a side note, the price difference between the X-T20 and the more expensive X-E3 is $100. If I had to choose between the two I would have preferred filming with the X-E3, hands down. 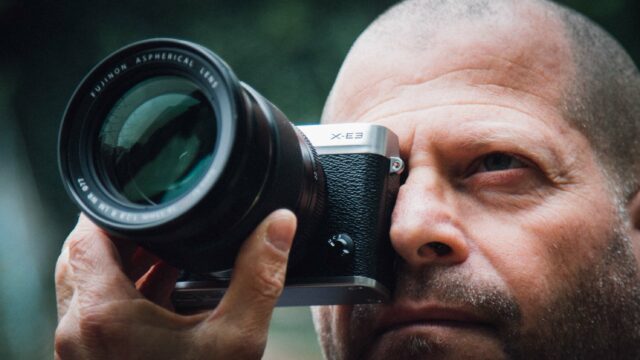 FUJIFILM X-E3 – I simply loved working with this camera!

Many thanks to Alon Ohana from Alon Ohana Music Production. You can visit his site by clicking here and Ronit Shahar