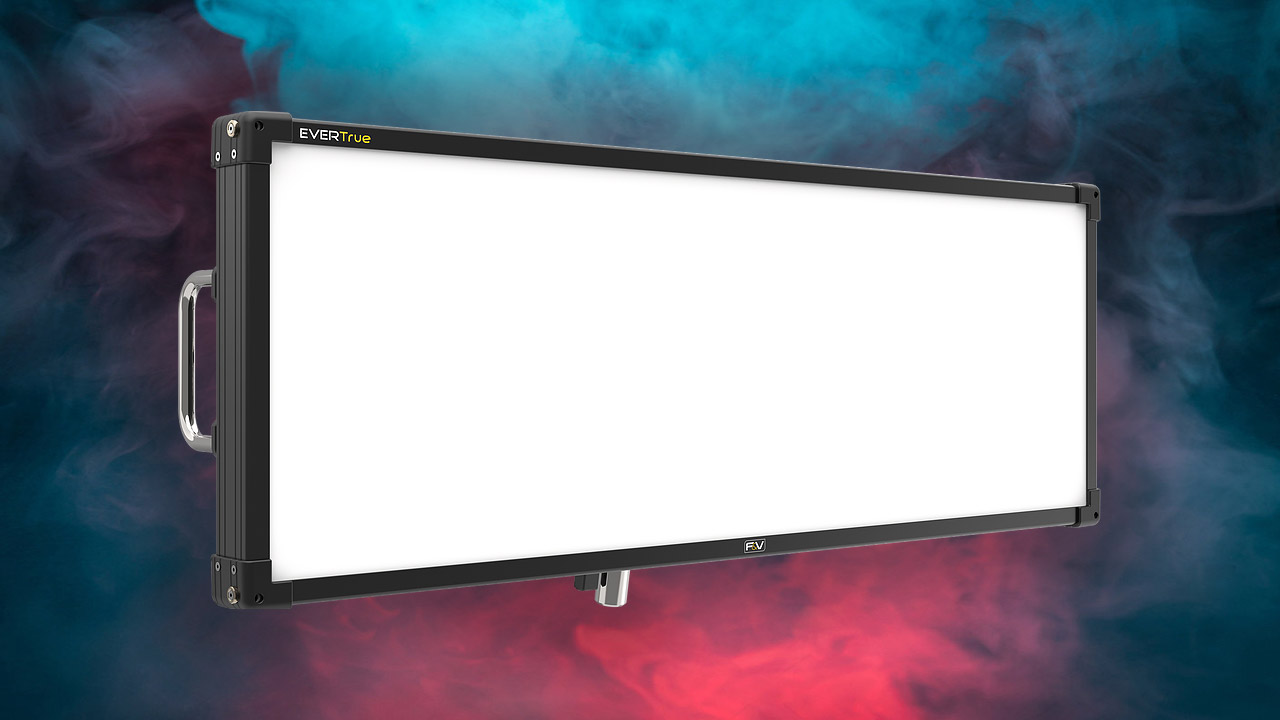 F&V — manufacturer of many innovative LED lighting products — have released their new Softlight F&V Z1200VC ,a 3×1 LED. Let’s have a closer look at the announcement. 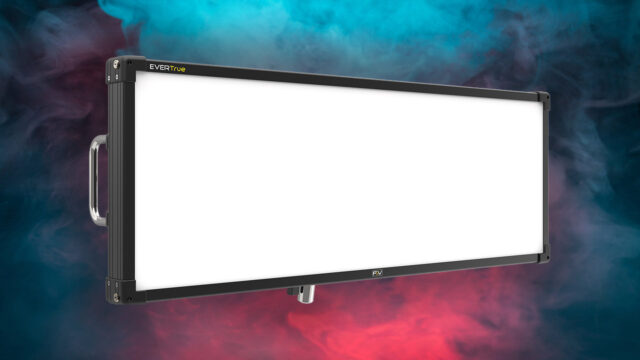 I have always loved lighting with soft lights. HMI or tungsten fresnels shot through (multiple) diffusion frames and fluorescent-tube fixtures like KinoFlos have had a fixed place in my arsenal since I began with filmmaking.

I tried to steer clear of LED fixtures in the past, because I never liked what they did to skin-tones and always felt the quality of the light was kind of “rough”, not en-par with the soft glow a KinoFlo or diffused tungsten source produced. That changed a while ago, especially when Arri came out with their Skypanel series of soft RGB LED lights. But their high price means that they are out of many budgets in rental as well as for buying them as an owner/operator.

Since the introduction of high-end LED lights like the Skypanel and others, various companies have stepped up to making LED soft lights that produce equally “good” quality light — F&V being one of them, with a CRI that matches the one of the Skypanels.

Let’s have a look at the F&V Z1200VC CTD-Soft LED Softlight – F&V’s newest offer, which appears to be a well thought-out product.

The F&V Z1200VC CTD-Soft LED Softlight is roughly 800mm x 290mm x 43mm in size (3x1ft) and is very light at only around 5kg (lamp head only). That makes the fixture one of the lightest contenders in the market. 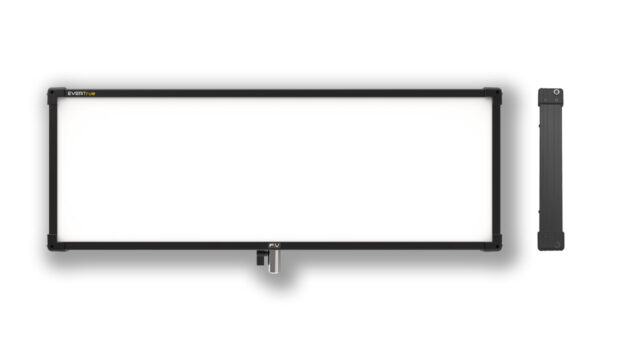 F&V employs a LED panel technology the named EverTrue Vari-Color, which they claim is superior to bi-color solutions. Their technology allows the color temperature follow the Black Body Radiation Curve more precisely resulting in no magenta or green color shift like it occurs when simply blending together tungsten- and daylight balanced LEDs like it is done in normal bi-color fixtures.

This Green/Magenta shift has always been the problem with bi-color fixtures, especially when they were mixed with pure daylight or tungsten sources that were balanced with gels. One of the reasons I never use Bi-color LEDs. Ever. I rather gel daylight LEDs with CTO to match tungsten sources.

F&V claim that light temperature can be adjusted from a very low 2400°K to 9900°K, which is quite a huge range compared to other products and will come in handy when matching existing light sources or for creative work. 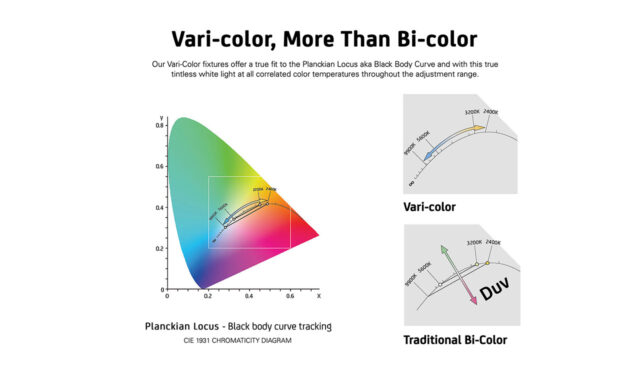 The TLCI (Television Lighting Consistency Index) of the lamp is given at “up to” 99 by F&V and they claim to factory-calibrate their lamps so that there are no inconsistencies between multiple fixtures. I presume the “up to” means that the precision is not constant across the full-color temperature range.

The fixture can be powered by either a 2-slot battery plate (Standard is V-Mount an Anton Bauer is optional) or via an AC adapter. (The V-Mount plate is included in the Rental- and Location kits, not in the Studio Pack.) 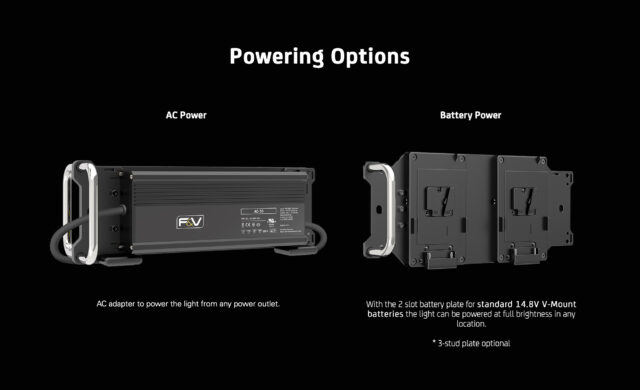 A separate unit is used to control the lamp and adjust settings either directly on the unit, via DMX and via WiFi.

A variety of pre-programmed lighting effects like Party, Club, Lightning, TV a more can be dialed-in and adjusted by the user – making the fixture a lighting SFX tool. F&V has hinted at more effects that will be added —presumably via a firmware update.

Another neat feature is user-selectable dimming curves – these can be useful in a variety of scenarios. Just think about a simulated sunrise or adjusting the dimming-curve to match tungsten lights that need to be dimmed live at the same time. 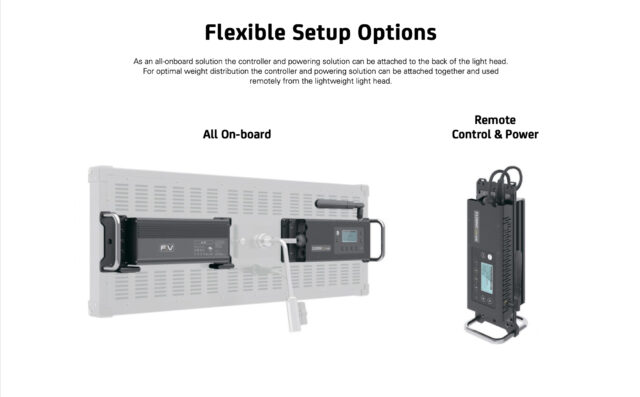 AC Adapter and Controller unit can be attached or detached

The Controller and the AC adapter (alternatively a battery mount) can be either mounted directly to the back of the lamp or taken off the lamp and used much like the ballast of an HDMI or Kino-Flo.

NOTE: This is a neat feature, because you can change the depending on where you want to rig the lamp choosing between a compact fixture with minimal cabling and the lightest possible lamp-head configuration.

The standard way of mounting the lamp is a central lollipop-mount, which enables the light head to be rotated freely in many ways — probably the best solution for location- and most studio scenarios.

F&V also offer an optional Pole Operation Yoke, which is useful when the lamp is used in a semi-permanent studio setting.

If the F&V Z1200VC CTD-Soft LED Softlight delivers, what F&V promise (at a very reasonable price point) they could have a winner on their hands that will be seen on many larger and smaller sets out there.

What also remains to be seen is the build quality of the lamp body and the accessories – whether they can stand some abuse on set will determine if the lamp is suitable for rental or if it’s more suited for owner /operators.

The lamp head itself has passive cooling and will not cause any noise issues, but it remains to be seen whether there are fans in the AC adapter or the control unit that might.

F&V are currently offering three kits that include the lamp head and various accessories: the Location Pack, Studio Pack, and the Rental Pack.

What do you think of LED lights in general and LED Softlights in particular? Is the F&V Z1200VC CTD-Soft LED Softlight something you think you will be using or even buying? Let us know in the comments!