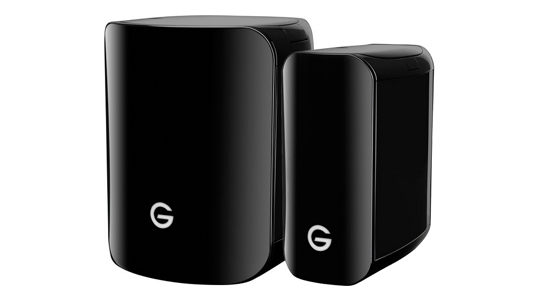 Whilst on the subject of storage, G-Technology released some exciting new products at NAB that are now shipping.

The G-Drive ev 220 is the latest portable hard drive from G-Technology that is also compatible with the G-Dock ev, boasting speeds of up to 220MB/s from a single USB 3.0 port.

The new Studio drives enters a whole other league however, with the G-RAID Studio and G-Speed Studio supporting speeds of up to 360MB/s and 700MB/s respectively.

I’ll discuss the G-Drive ev 220 first. If you haven’t already, check out the G-Dock ev, which is the mothership that the new G-Drive ev 220 is compatible with.

The G-Dock ev is an enclosure accepting two hard drive caddies with SATA connection. These drives are configurable into either RAID 0 or 1, meaning it will duplicate data on either disc, or split data over both for speed.

The G-Drive ev 220 is effectively a hard drive caddy for the G-Dock ev. However what’s clever is that it also has a USB 3.0 port on back so you can use it as a portable hard drive.

What’s new about the G-Drive ev 220? Unlike its slimmer predecessor, the G-Drive ev 220 contains two 2.5″ drives inside that are RAID 0 configured for faster operation. This means they can obtain transfer speeds of up to 220MB/s (hence the name) via SATA or USB 3.0; a vast improvement from the single ev drives that have a maximum speed of 136MB/s.

I love the dual protocols, you don’t have to own the whole system to unlock the full speed of what is a very fast and high capacity portable USB 3.0 hard drive.

The G-Drive ev 220 has a storage capacity of 2TB, the drives are 5400rpm and comes with a limited 3-year warranty.

Next are the new Studio drives from G-Technology. Gone is the sleek aluminium aesthetics, both Studio are easy to identify with their gloss black exteriors, no doubt to follow suit with Apples change of look with the new Mac Pro. The G-RAID Studio is a dual drive thunderbolt 2 system. Configurable in RAID 0, RAID 1, or JBOD the Studio line are built for capacity and speed.

It ships with 2 7200rpm Enterprise drives with total capacities up to 12TB (8TB & 6TB also available). Transfer speeds can reach up to 360MB/s.

The G-Speed Studio is effectively double the G-RAID Studio. With the same RAID configurations plus 10 and 5, it house 4 drives and has a capacity of up to 24TB (12TB & 16TB also available), with transfer speed of an impressive 700MB/s.

The Studio Drives naturally come with a 3-year warranty, and both provide 2X Thunderbolt 2 ports.

The Studio line is built specifically to keep up with the demand of 2k and 4k video, whilst retaining G-Technologies long standing track record for reliability.

G-Technology only ever use Hitachi drives which have been independently proven as the industries most reliable drives.