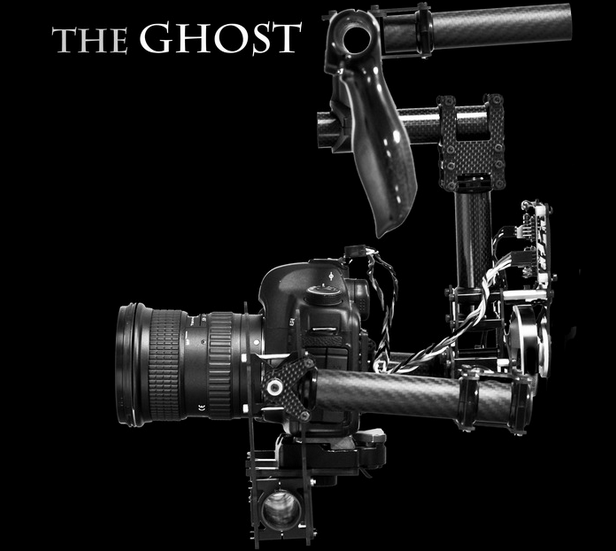 Here we are again, another 3-axis camera stabilizer. The Ghost is currently working its way through the ranks of Kickstarter; with an already successful campaign exceeding it’s initial pledge.

The Ghost beats the DEFY G2 in its weight capacity. Excitingly offering support for camera setups up to 3.5lbs. For reference, a 5D mark iii and 24-105mm IS L lens is within this range at 3.36 lbs.

The maker, Jesse Spaulding has been working on the device since 2011, with the initial development exploring a 2-axis gimbal device for mulirotored helicopters.

The Ghost is constructed from carbon fibre, weighing in at approximately 2.43 lbs. Using open source firmware; the powered device operates up to 2.5 hours per battery (optional extra 4000mah batteries will be available).

The device is offered in two forms, assembled and un-assembled. The difference in cost is $400, which is a nice little saver if you’re the DIY type, Airfix fan.

Most importantly, the price of a fully assembled device is currently available via a Kickstarter pledge for $1995 ($250 below suggested retail price). That’s currently $350 cheaper than the DEFY G2, a similar device but is targeted at smaller cameras (payload of around 13 oz.).
Please note, the makers of the DEFY, Relentless have announced future development of a G5 stabilizer which will compete at the same payload range as the Ghost.

It’s hard to benchmark these features and specifications, as we are still yet to see real world results from all devices. Yet we’ve already seemingly entered a price war between these companies before any of them have even been officially released to the public.

The target for shipping the unassembled Ghost kit is set for December, with assembled kit early January. The competing DEFY G5 is getting an update this Friday, more information will be provided on it’s release date when we hear more.