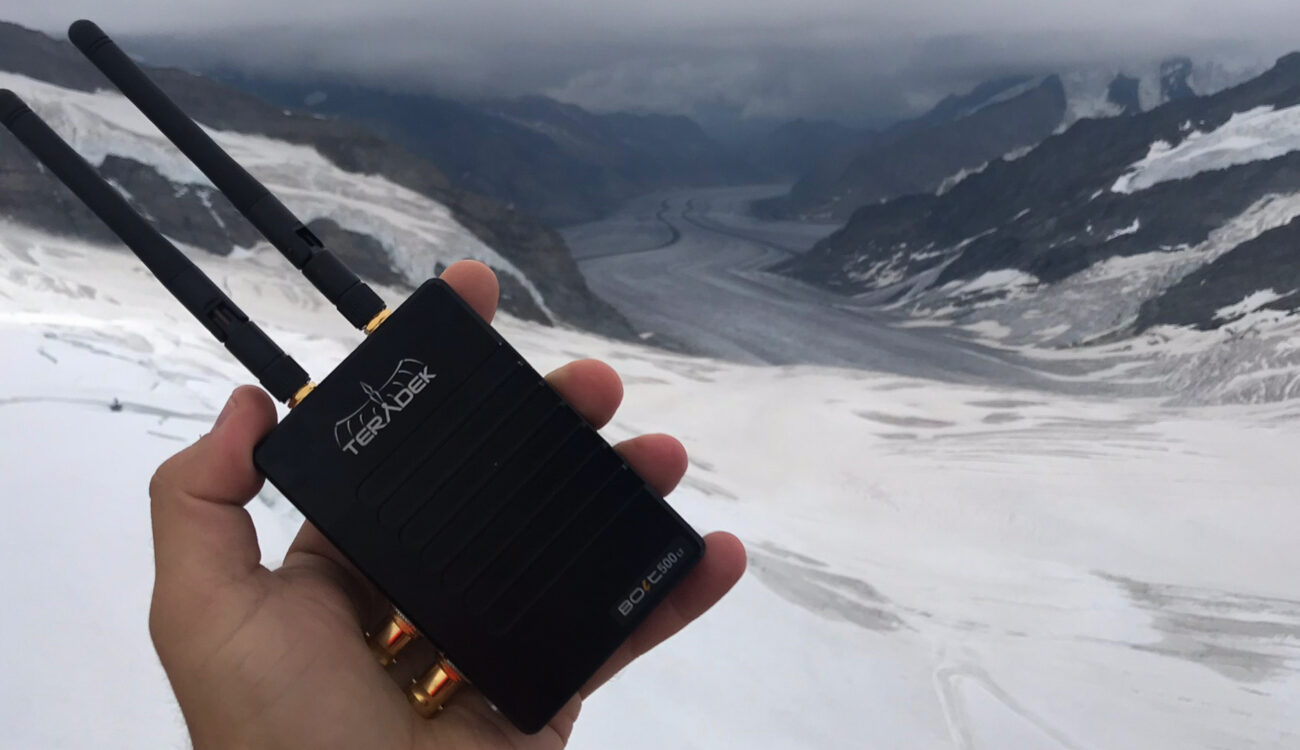 The challenge we were handed was a unique one. How do you shoot six episodes of a TV docuseries with a camera team of three in environments that included glaciers, high altitudes, and extreme temperature changes, all while staying mobile and shooting on the Monstro VV camera from RED Cinema? 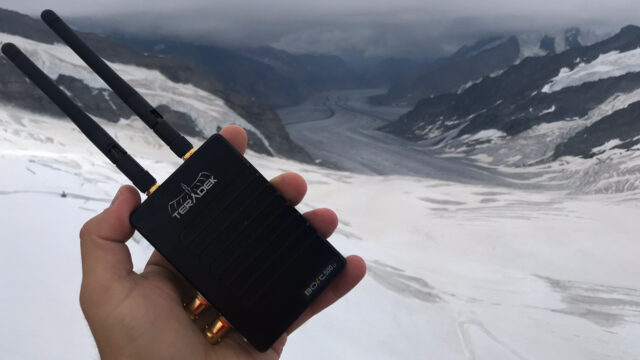 Luckily, we had access to some of the best cameras and tools on the market including the DJI Ronin 2, but this equipment comes with added weight, less portability, and the need to pull wireless focus (in the case of the Ronin 2) in fast moving and uncontrolled situations.

Adding to the complexity was our desire to shoot with our preferred Sigma cinema primes. On much of my doc projects I’ve worked with servo-equipped zooms like the Fujinon 19-90 or the Canon 17-120, but this time, in order to get the particular look we wanted, my partner Rin Ehlers Sheldon and I were strongly in favor of using cine primes. We knew it might mean a slower workflow in the field to have faster lenses, but we wanted to put them to the test in a true documentary setting. This meant lens changes on the side of mountains where the temperature would drop from 90-degrees Fahrenheit to about 40 degrees depending on altitude and changing weather conditions.

The challenging elements of the shoot which included many lens swaps, the R2, the altitude, temperature changes and the need to move quickly in rapidly changing doc environments meant we needed to make the right decisions up front with gear, taking no more than what was essential, and ensuring the essential would prove reliable. Plus we needed a fool-proof wireless plan to prevent the show (filming over four weeks in Switzerland) from coming to a dramatic halt at the worst possible moment.

With an eye towards mobility and space efficiency, we chose the Teradek RT wireless lens control system and Teradek wireless. This would be my first time working with the Teradek RT system, but our production company has had a history in general with Teradek, so we knew that if this was a product they could get behind, chances are it would serve us well too. 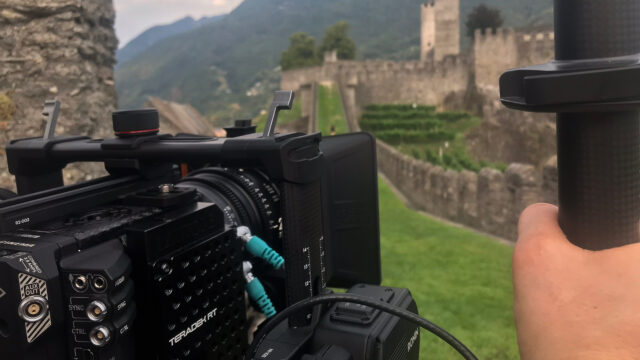 Teradek RT being used on a DJI Ronin 2 at the Castelgrande in Ticino, Switzerland.

A few brands dominate the wireless focus pulling space on movie sets, and I’ve had experience using most of them. On paper alone, the Latitude Sidekick was what made the Teradek RT system stand out from the rest.  Cables hanging everywhere from a camera body is a recipe for disaster, and the Sidekick keeps everything neat and tidy, while also preventing precarious snags. The Latitude Sidekick, in brief, is a side plate that mounts directly to DSMC 2 cameras and connects seamlessly with up to three Teradek RT MK 3.1 motors (we used two on this production) and replaces the spot normally taken by a RED side handle.

Setup is simple. Without reading the manual (a cliche I’m guilty of) I was able to set up both iris and focus motors as well as the Sidekick on the RED DSMC 2 Helium on the Ronin 2 in five minutes. Once you’ve calibrated for iris or focus control on the hand controller (also a quick process), you simply place the motor on the lens’s focus ring and it automatically calibrates the end points. The auto calibrate feature is incredible and stands head and shoulders above the analog focus systems of the past. When you are swapping prime lenses this quickly, you save tons of time by just placing the motor and walking away while it calibrates.

A quick word on the Teradek RT remote — if you’ve used other follow focus remotes, you’ll love this one and find it easy to use. It runs on LP-E6 batteries (typically used with the Canon 5D DSLR series) which originally bothered me because I’d have to have yet another type of battery on set, but then we discovered we didn’t need to change the battery for literally a week of operation. That’s a week of 12 hr./ 5TB days running all over the mountains.

One thing to be aware of is that the camera body lacks the output to power the Latitude side plate and you’ll need to power the plate from a battery D-Tap out. Not a big deal (especially with the array of power options on the Ronin 2) and Teradek RT provides a cable that’s just the right size to cleanly feed power to the plate through a D-tap to lemo cable. You’ll also want to mark your motors with a piece of tape once you’ve calibrated them so you don’t get the iris and focus calibrated motors confused while building the camera.

In the past, I’ve found motors that provide too much torque problematic, resulting in slipped gears and even damaged lenses. The MK 3.1 motors don’t have this problem, and we never experienced a slipped motor despite the Ronin 2/DSMC 2 Helium being subject to lots of stress and frequent relocation in the field. Simply slide the MK 3.1 on the 15mm rods or 19mm rods, touch the motor wheel to the iris or focus wheel of the lens, attach the motor cable (helpfully labeled “motor”) and plug it into the port on the Sidekick (also labelled “motor”) and you are off to the races.

For operators wanting to get into the wireless focus game, but not looking to drop a ton of cash up front, you could purchase the Teradek RT system in stages beginning with focus control and then moving to iris and zoom control as budgets allow. The system is modular and provides room to grow your perfect kit. A multitude of different kit configurations exist, but a good starting kit will put you in the $4000 range. Teradek has a helpful tool that makes it easy to price things out.

We solved the focus pulling side of the puzzle with Teradek RT, but to accurately pull focus you need a good zero delay wireless video system that won’t let you down in critical moments. For our 1st AC monitor we picked the 703 Bolt. The 703 Bolt monitor is a great collaboration between SmallHD and Teradek and it includes a single Sidekick II receiver embedded in the monitor. Both Rin and I would often check the 703 Bolt in bright sunlight for brief exposure or focus checks when the RED monitors proved to catch a little too much glare. I have a longer review HERE on the 703 Bolt, but, in general, the 703 Bolt is a daylight viewable monitor with all the professional tools you need such as waveform and peaking in a compact package. 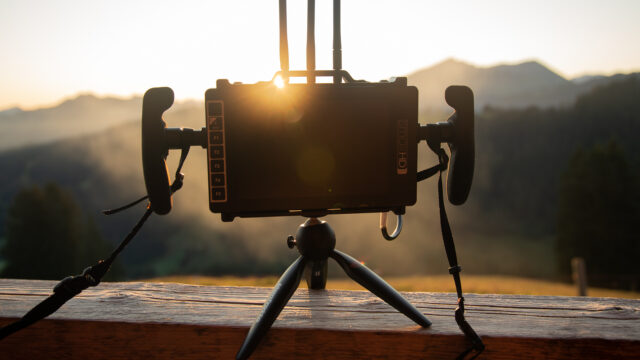 703 Bolt at 6am in Gstaad. Picture Credit: Graham Sheldon

We attached a simple strap to the 703 Bolt, and our 1st AC, Fabian Chaundy, was able to pull focus for Rin (operating the Ronin 2) with the monitor around his neck while walking through both fields and inside thousand year-old buildings. The signal held up despite thick castle walls and very cold/wet conditions. During interviews we added another Sidekick II receiver to the back of the 703 Bolt with an ultralight articulating arm. Using the dual camera mode on the 703 gives you the ability to see A and B cam side by side on the same monitor without tons of cables and receivers hanging off the back.

Both cameras were equipped with the new Bolt 500 LT SDI transmitters. As a user of some of the older Bolt systems, I was immediately aware that these transmitters are smaller than their predecessors, they do have the range as advertised, and the words “zero-delay” isn’t just fancy marketing hype. Because we had the good fortune to be able to select our exact camera kit on this project, we had a choice between the affordable Bolt LT and the beefier Bolt XT systems. The Bolt LT line proved to be perfect for our needs as we were able to choose our exact camera kit on this one, so the flexibility of having the dual HDMI/SDI capabilities and additional power options of the XT line weren’t necessary. We were fine with the basic system. When other items on set would show heat warnings, these transmitters just kept on ticking. Despite being considered a “lightweight” series, our Bolt LT’s appear to have the same exterior build as the XTs and on this project they survived a lot of calculated abuse. In the past I was often in a position to hand a monitor to agency clients and in the rare event of signal drop, it leaves a bad taste and doesn’t feel professional. Though we didn’t have a true “client” on this show, I would have no problem handing a monitor with a Bolt 500 LT on the other end to an on-set VIP while shooting in the future. 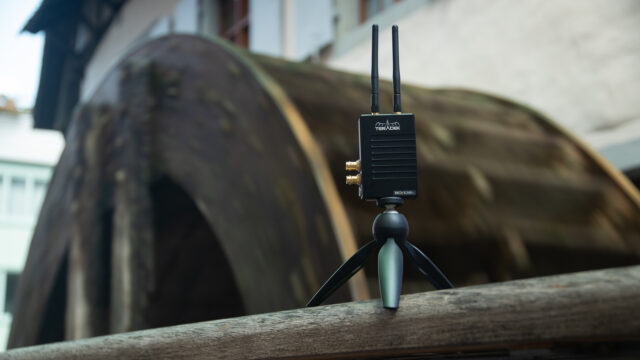 Teradek Bolt 500 LT at the Basel Paper Mill. The mill was built 500 years ago.

Our team went into season one of Cornerstone aiming to shoot a docuseries with a true cinematic aesthetic. Primes and cine cameras like the RED Monstro and Helium don’t have a reputation in and of themselves as being true run and gun doc setups, but with a real focus on your kit you can build a wireless ecosystem that keeps things moving and doesn’t sacrifice story — even with a three member camera team.