GoPro announced their first drone, the GoPro Karma, at Photokina 2016. We get hands on with this highly-anticipated foldable drone right here at the show. The GoPro Karma has been designed to make it as easy as possible to use and fly straight out of the box, whether just using the stabilizer or for aerial filming. Within a few minutes, the foldable drone can be unfolded, powered up and linked to the remote that conveniently includes a screen.

It has a number of automated features including auto shoot paths where the GoPro Karma will orbit between two points, a reveal path, flying up or away from the start point, and cable camera mode. 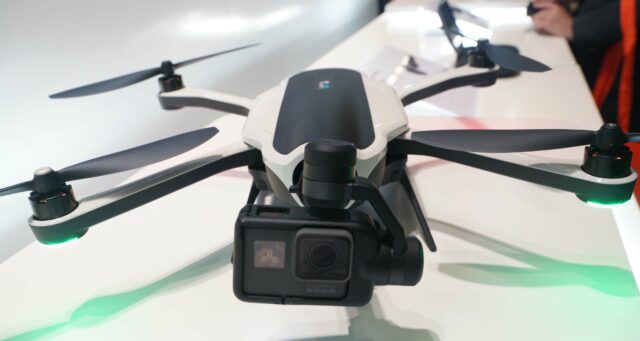 The controller has a built-in touchscreen, and has been simplified to make it as easy as possible to fly straight out of the case. Simulation tutorials will be available soon to aid in learning to fly the drone.

In terms of batteries, the GoPro Karma has a plug and play style removable battery that allows for 20 minutes of flying time, while the remote battery lasts for 4 hours and can be charged on the go.

Learn more about the GoPro Karma, GoPro HERO 5 and the new GoPro eco system in our launch article.

The GoPro Karma will be available form the 23rd of October, with the full package including the drone, GoPro Hero5 camera, stabilizer, grip, controller and batteries for $1099. For the GoPro Karma foldable drone alone, the pricing will be around $700.