As we previously announced, SLR Magic, makers of a variety of speciality lenses and adapters, is bringing anamorphic capabilities to the popular MK cine zoom series of lenses from FUJINON. We had a chance to take the SLR Magic Anamorphot 1.33x-65 adapter into the field at Cinegear 2018 and the video and initial impressions are below.

First off, if you are looking for horizontal flare characteristics this may not be the adapter for you. The image is clean in general and lights don’t flare to any great degree, but the ability to use your favorite 16×9 sensor to create a anamorphic look should not be discounted.

It is worth noting that SLR Magic also thinks the adapter will work with a variety of 82mm threaded lenses, but they haven’t tested all the possible combinations. 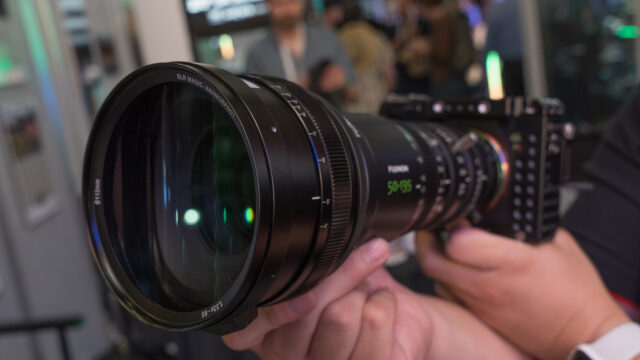 To use, simply screw the adapter on an MK zoom and match the focus on both the zoom and the adapter (this takes a bit of re-training your brain) and then you’re ready to shoot. Keeping critical focus can be tricky once you have the adapter screwed on as you won’t be able to tell if your lens or the adapter is soft. To combat this it might be worth using a range finding laser and setting the focus distance manually on the adapter. Of course, this makes pulling focus on quick action a little tricky potentially, but we’ll reserve judgement on that until we have a chance to do a complete review.

Like with most anamorphic shooting, you’ll want to de-squeeze your image to properly frame and view your shot with an external monitor.

Yes, it’s got a bit more bulk to it when compared with its predecessor: the SLR Magic Anamorphot 1,33x–40 adapter, but that doesn’t translate to being heavy necessarily. We’d still suggest adding lens support though when mounting the adapter to the end of an MK zoom. On the end of our Sony a7 III the zoom and the adapter felt a bit precarious without support.

Will this replace a full fledged big ticket anamorphic zoom? No, but with a price tag of $1,500, SLR Magic is adding another capability to the already great MK Series of E-mount lenses and the adapter promises to be a strong entry to the world of anamorphic.