After a successful Kickstarter campaign, HIVE LIGHTING are just a few weeks away from finally bringing their much-awaited wasp 100-c LED fixture to market.

Like we originally reported back in December 2016, the wasp 100-c is an 85W LED spotlight with the kind of output you would get from a 650W tungsten fixture. In addition to the usual advantages of LED — such as lower power consumption and heat generation — the wasp 100-c also offers OMNI Color LED technology, allowing it to reproduce millions of different hues thanks to an array of LEDs of various colours, in addition to pure white.

In comparison to something like the Arri SkyPanel — a very desirable  OMNI Color LED fixture — the wasp 100-c comes in a compact form factor that allows it to be a lot more portable than something in a panel form-factor. The light can also be powered with anything above 95Wh, so you can stay mobile with a V-Lock or Gold mount and a D-Tap to 4-pin XLR adapter. 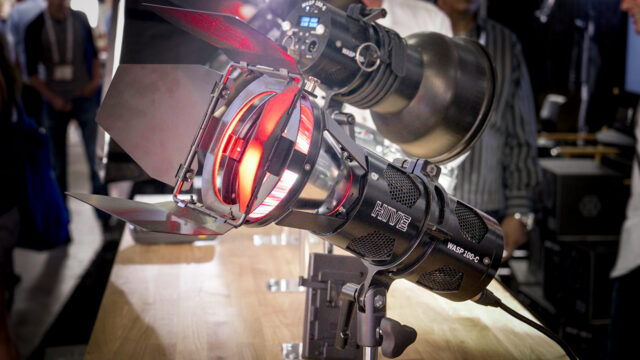 Similar to the recent firmware update to the ARRI Skypanel, the wasp 100-c will also offer additional features such as firelight, flash and police siren effects via a future firmware update through the USB port in the back of the unit. This makes it possible to easily replicate effects that would otherwise require much more complex setups.

HIVE LIGHTING are currently shipping the first wasp 100-c units to their Kickstarter backers, but you can already pre-order it from various retailers. The basic kit will cost $1000, and includes the head, a set of three lenses, barn doors, a 22-degree reflector and a power supply, with optional accessories to become available in the future for around $100 to $300.

Is it time to start upgrading your lighting kit? Is OMNI Color the future? Let us know your thoughts in the comments below!