Fresh from Inovativ for NAB 2017 is the Scout NXT, a more affordable base model in their Scout range of carts, with a collapsible and tool-less design that makes it ideal for portable use.

If you do the kind of production jobs that involve moving large quantities of expensive gear around on set, and specially if you change locations often, then the Scout NXT cart from Inovativ may be an ideal solution for you. It is an aluminium cart with a modular design that can carry a hefty payload, and that collapses down to easy-to-carry, checked baggage-friendly dimensions. 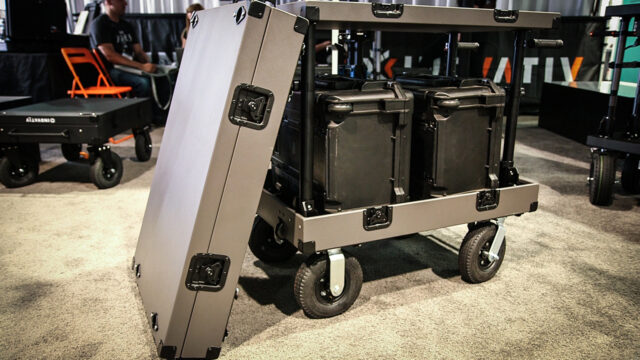 Using a more generic wheel system, the Scout NXT is $1,000 less than Inovativ’s popular Scout Evo, and it also doesn’t feature the height adjustability of more expensive models. However, the modular design of the Scout NXT means you can upgrade parts and build up to the features of the more expensive Evo over time. Other optional modules include camera mounts, stand supports and monitor arms among others, allowing you to modify your Scout cart to your own particular needs.

Its tool-free and collapsible design allows the Inovativ Scout NXT to break down to 7” / 18cm thick and 72lb / 32.5 kg in weight, small and light enough to transport as checked luggage on a plane, or to take up very little room in your vehicle.

Though modular and collapsible, the Scout NXT can still take quite a lot of weight: with a 300lb / 136kg payload, it will handle quite a lot of gear indeed. However, more demanding users requiring a maximum load capacity of up to 1200lb or 544kg may want to look at the Ranger or the Echo. Patrick from Inovativ tells us that whatever your choice, all of their carts are around 30% lighter than the competition.

All in all, the Scout NXT seems like a great solution for everyone from gimbal operators, DITs, photographers, and other professionals who need a solution to move large amounts of heavy gear around on set. Its aerospace aluminium construction makes it light and robust enough to give you the confidence that your equipment will stay put, and its portability allows you to keep your mobile setup consistent, without having to improvise with whatever solutions are available at your destination.

Would your production requirements benefit from the Inovativ Scout NXT? Let us know in the comments!