Lots of new and exciting products are being discovered and examined at this year’s NAB. One of the most promising new cameras could be the new Kinefinity Terra, which comes in two flavours – 5K and 6K.

Jihua Zheng of Kinefinity was kind enough to take us through their new and updated range of cameras, namely the Kinefinity Terra. The camera body itself is surprisingly small and compact in size—and with a weight of only 920 grams, you might be forgiven for thinking it is a DSLR body. One of the predestined areas of application could be a gimbal or—on the heavier side of things—a drone. 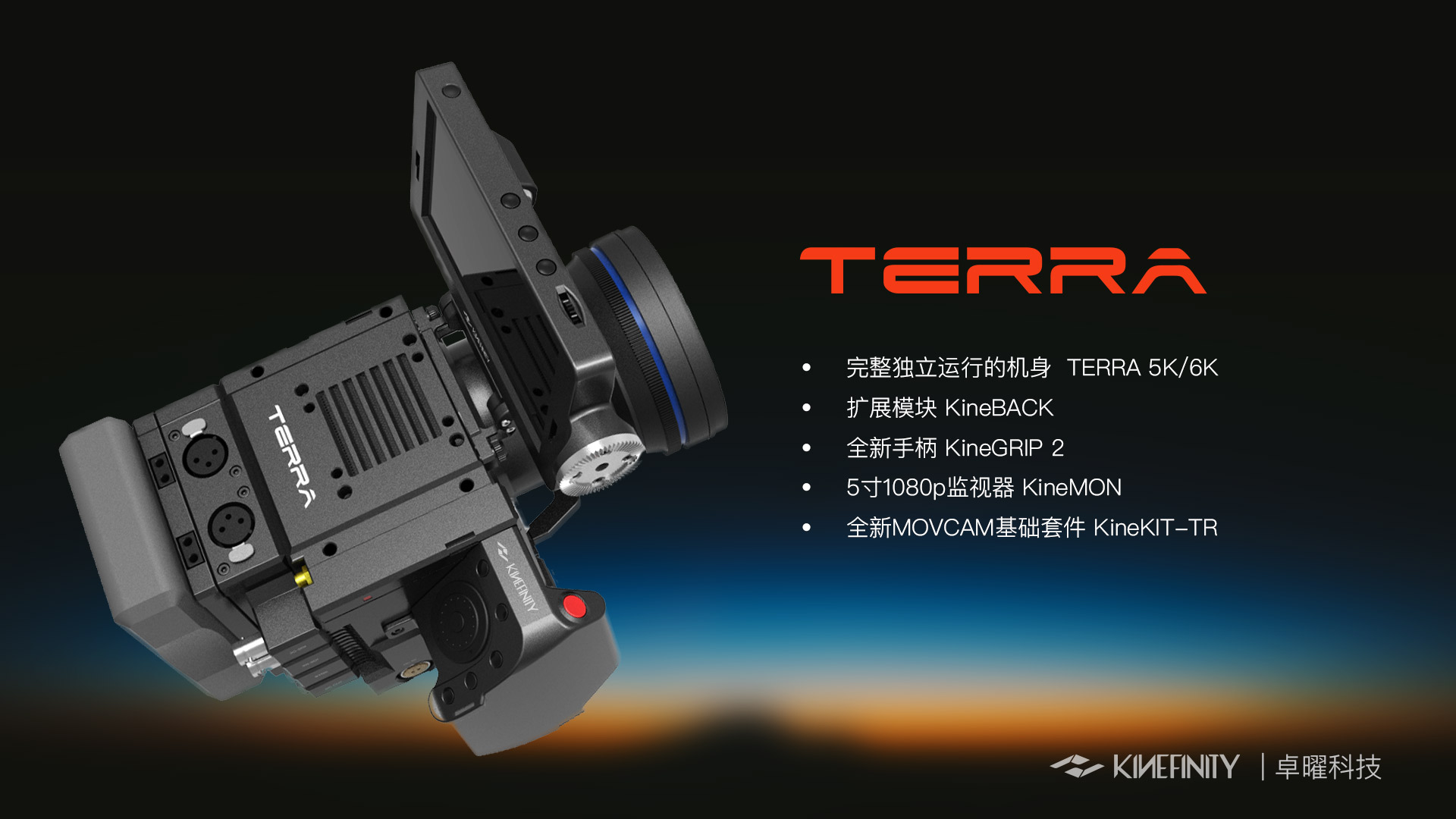 If you intend to use this camera on a gimbal, the Kinefinity Terra camera pretty much works right out of the box. All you need is a battery, a lens and some form of HDMI monitoring solution and you’re good to go. For more demanding applications, you might need the KineBack ($1200), it offers dual SDI output, Timecode in/out, DC power out, an integrated V-mount for powering the camera and two balanced XLR audio inputs with phantom power enabled. Even without the KineBack the Kinefinity Terra camera is capable of recording audio with its built in microphone as there is a 3.5mm jack audio input available too.

The Kinefinity Terra records to SSDs, and the respective slot is built right into the camera body. Kinefintiy recommends the use of so-called Kinemags but any off the shelf SSD will get the job done, as long as they are fast enough. Controls in the form of buttons and dials are built-in to the chassis, as well, only a monitor or a viewfinder is needed for basic operation. The optional Kinegrip is also available for convenient handheld operation and will serve as a powering unit for the camera with its built-in power pack.

The camera comes with a native electronic EF mount or a KineMount which is a mount with a short FFD (flange focal distance) so it can be adapted to a wide range of mounts quickly, such as PL, Nikon F, or Canon EF mount.

The video stream is being recorded to 12-bit KineRAW or various flavours of the ProRes Codec, such as 422 HQ, 422 LT or proxy. Additionally, several Log curves—such as a KineLog3 curve—are implemented. 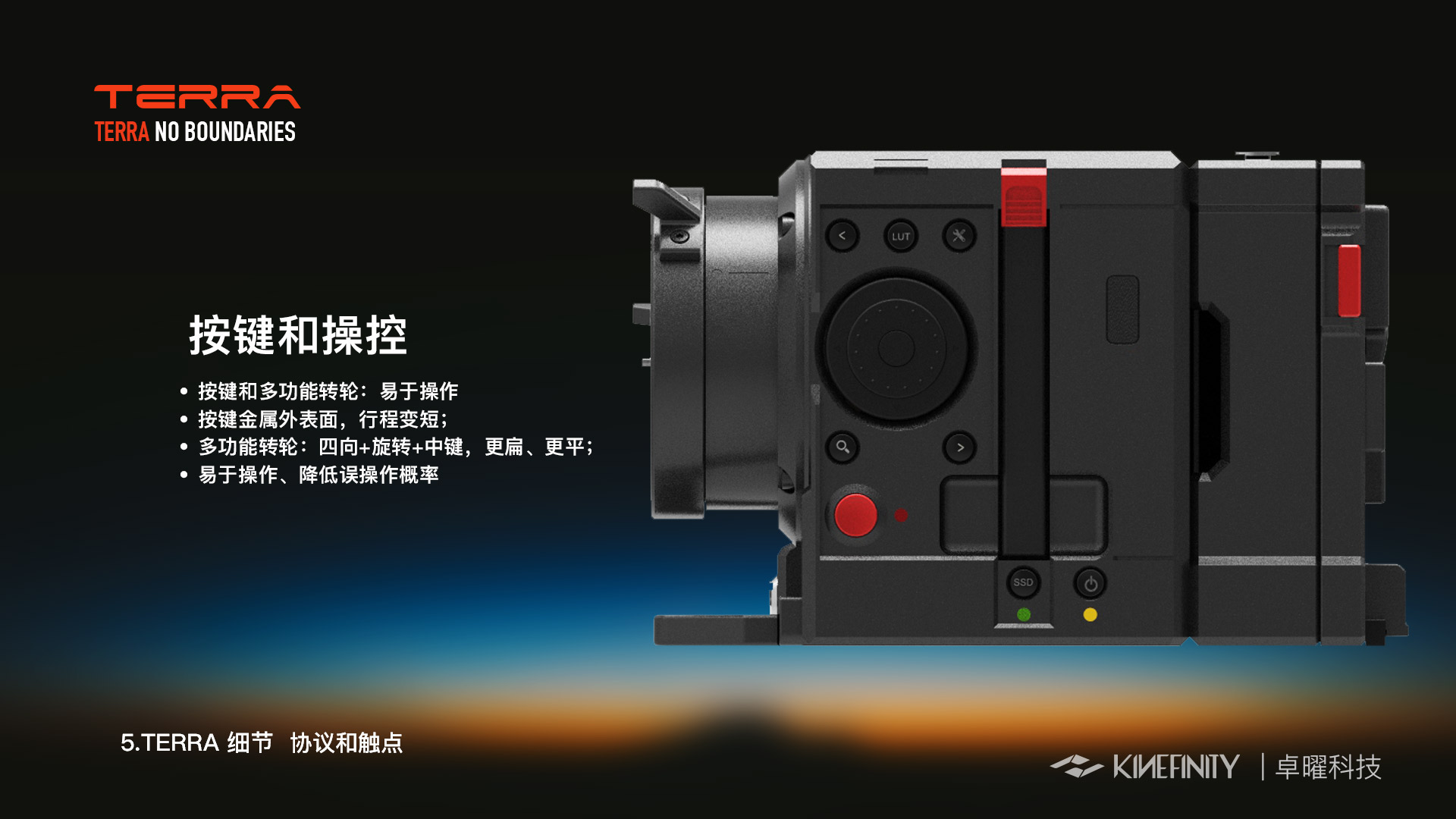 Two versions of the Kinefintiy Terra

There are two models of the Kiniefintiy Terra camera available, the 5k and the 6K. The only difference between both models is the implemented S35 CMOS sensor and actually, the 6K sensor is the same which is build into the Kinemax camera. So it is capable of recording 6K footage with 25 fps, 4K footage with up to 100fps and 2K footage up to 225fps.

The 5K version of the camera sports two shutter modes; you have the choice of either a rolling or a global shutter mode. This is the one feature Blackmagicdesign failed to deliver with their Ursa mini 4.6K camera. Kinefinity claims that even without the rolling shutter enabled, the jello effect is less severe than in previous cameras built by the company. It is capable of recording up to 60fps at 5K resolution, up to 100fps at 4K resolution and up to 200fps at 2K resolution. With the global shutter enabled the dynamic range is reduced from 15 stops down to 13 stops. We definitely will keep an eye on these values and will try to get our hands on one of these cameras for extensive testing in our test lab. 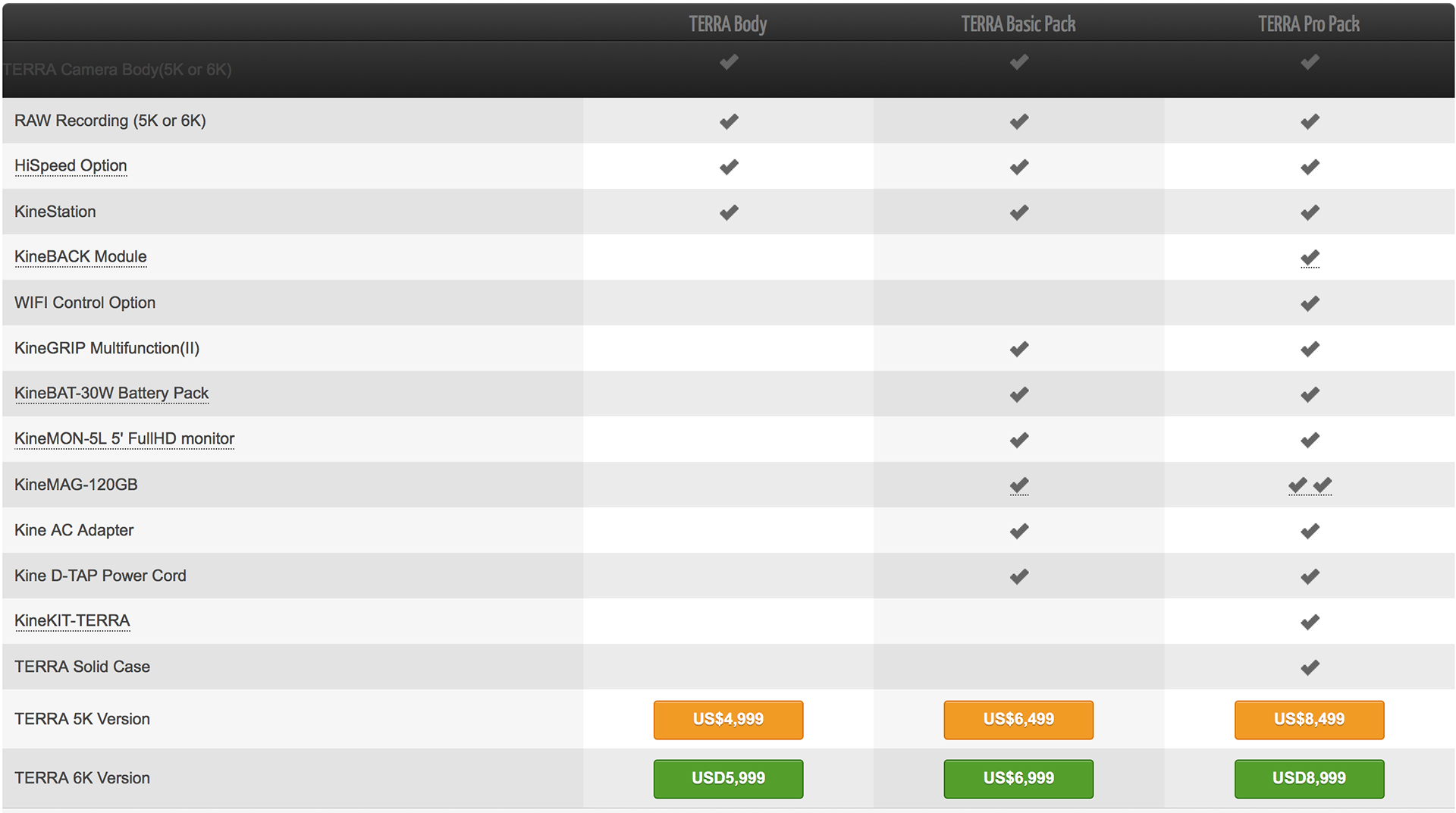 The 5K version of the Kinefintiy Terra is scheduled to be shipped for $4,999 at the end of June. If you are feeling more comfortable on the high-end side of the resolution race, the 6K version will be ready to be shipped already at the end of may for $5,999. Other packages are available, too.

Learn all about the Kinefinity Terra (and preorder) on their website.