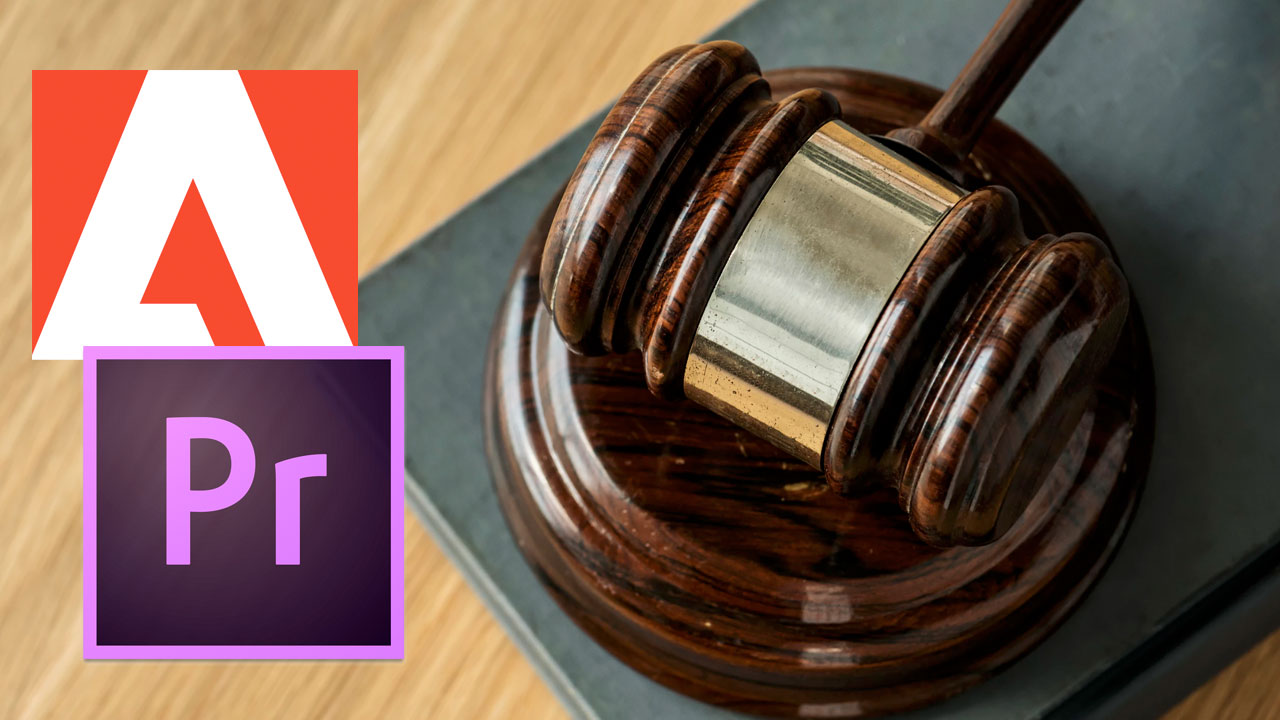 Have you already heard the story of photographer and videographer Dave Cooper, who filed a lawsuit against Adobe on the grounds of Premiere Pro CC 2017 11.1.0 deleting footage worth approximately $250,000, unrelated to the “Media Cache” folder it was actually supposed to delete? Keep reading …

Cooper had edited a video project and used the “Clean Cache” function to free up disk space, with the “Media Cache” folder being placed inside a general “videos” folder, which led to the wrongful deletion of over 100,000 clips. Adobe has since acknowledged the bug and fixed it in version 11.1.1. The class action lawsuit has been filed in California and Dave Cooper is seeking a jury trial awarding monetary damages, after failing to reach an out of court settlement with Adobe. Here’s what we know and what we all might learn from it.

It’s a nightmare scenario if you think about it: 100,000 video clips, over 500 hours work of work irrecoverably gone. Just like that. That’s what happened to photographer and videographer Dave Cooper, when he used the “Clean Cache” function of Adobe Premiere Pro CC 2017 11.1.0. The backstory goes like this: Cooper was working on an edit after recently having updated to version 11.1.0 of Premiere Pro. He kept his video files, meaning all his video files with subfolders per project, in a folder called “videos”. 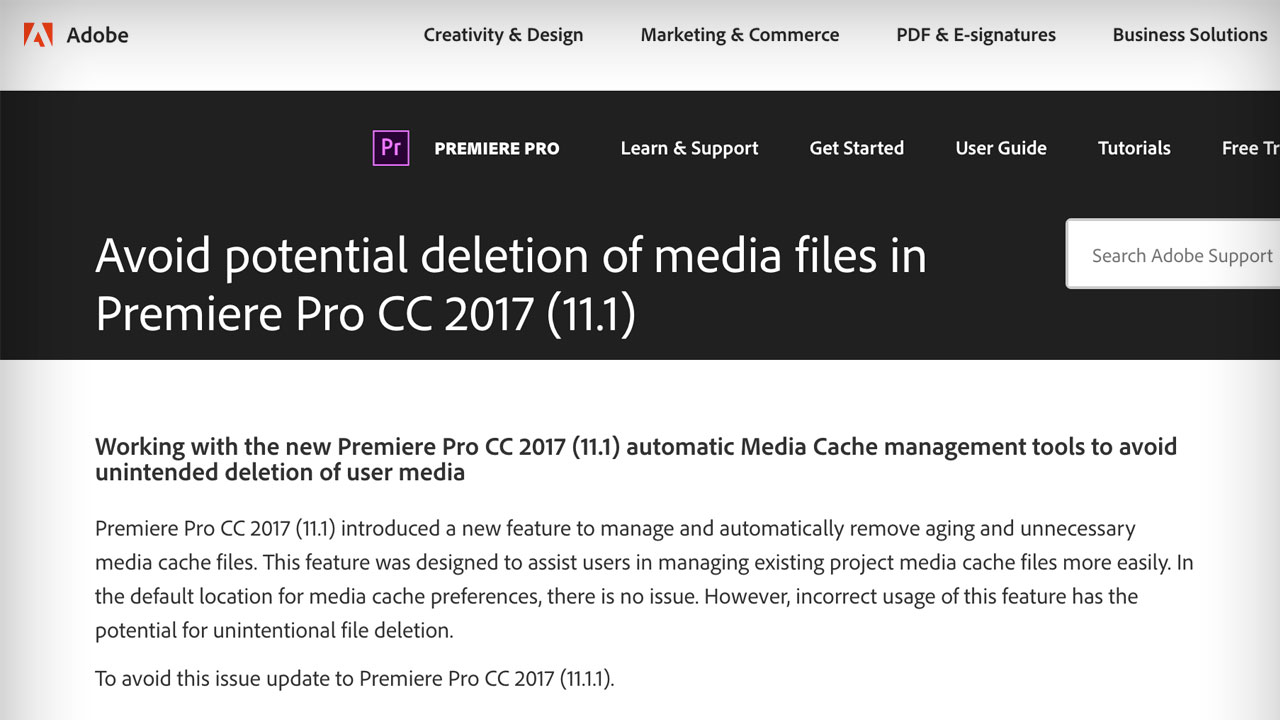 Now basically all NLEs will need and thus create a cache folder. The reasons might vary in details, but in general this is where all the parts of the edit will be stored that users need access to while editing, but not beyond a finished project and which are too large to keep in memory – which of course happens fast when working with video files. So what exactly will be kept in cache? Again this will vary from NLE to NLE, for example DaVinci Resolve will keep your optimized media (i.e. ProRes versions of your RAW clips) in the cache folder. Same goes for parts of edits that feature heavy grades, or lots of effects. They might be rendered out and stored in the cache folder for better playback performance. Obviously, if you’re editing larger projects, those cache folders might get pretty large in size too, making some kind of management necessary and reasonable. 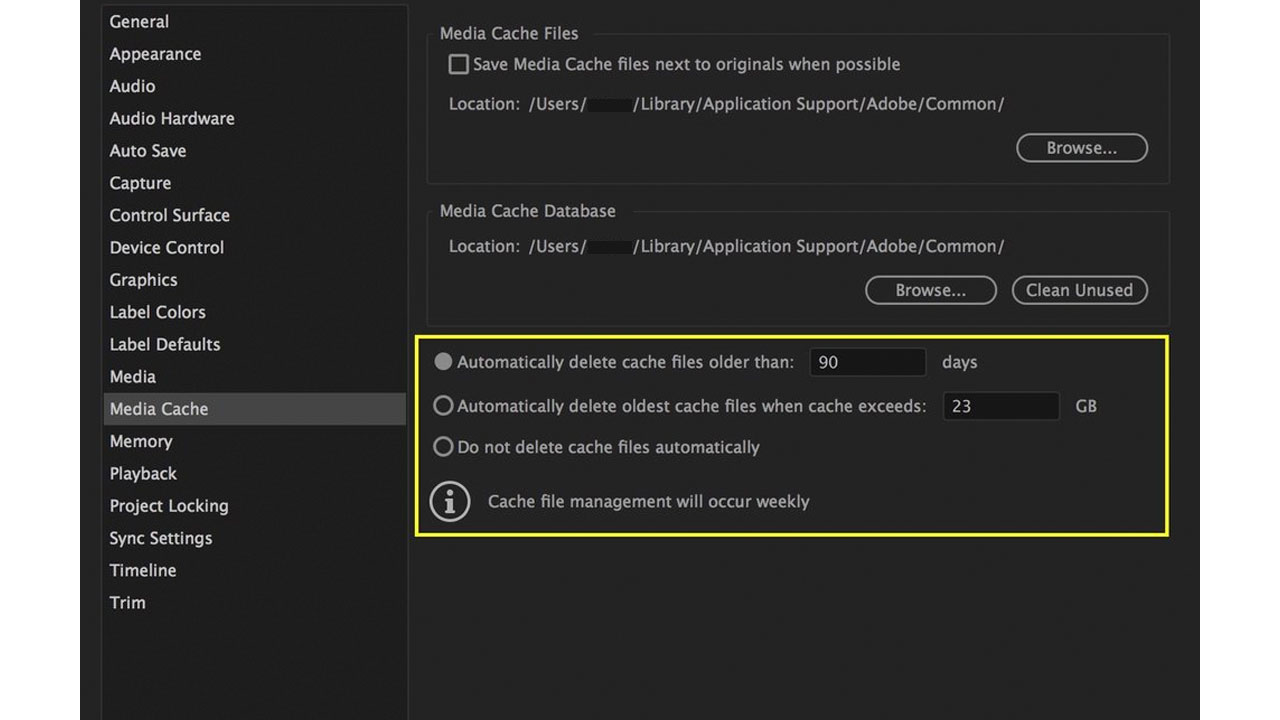 Adobe Premiere Pro CC had introduced two ways to manage the cache. You could either trigger its deletion by hand using the “Clean Cache” function, or just wait 90 days and then Premiere Pro would delete it automatically, assuming you’ve stopped working on it (those 90 days can be changed in settings). This management function was the culprit. Dave Cooper’s claim is that it not only deleted the “Media Cache” folder and its subfolder, but also all other files in the “videos” folder entirely unrelated to cache, JPGs, PSDs, PDFs and video clips, which were older than 90 days. These files had been accumulated between 2010 and 2017 and Cooper was still earning money by licensing them regularly. Following the deletion Cooper had both tried to recover the deleted files, as well as reach an out of court agreement with Adobe. Neither of these things worked out, so the legal case took its course and it still isn’t over.

What can we take from all this?

Let’s get something obvious out of the way: the way that Dave Cooper handled his files was very wrong on multiple levels. With this out of the way, we are all human and while hopefully all of us working as video professionals know how to properly handle their data, mistakes and hardware failures can and will happen. Also there is no absolute security of data, just degrees of security that are acceptable and others that seem needlessly risky. So here are a few common misconceptions, that we probably have all either been guilty of at some point or at least encountered them:

We will soon have a follow-up post to this one, explaining all of the points above in greater detail, because if nothing else, something we might all take from this is the opportunity to (re-)examine our own backup practices, trying to really be honest about the shape we are in. So check back soon, for part two.

How would you react if a bug destroyed your footage? Do you have a solid backup-strategy, using off-site and/or online backups? Should we do an article about the best strategies and applications to keep your footage secure? Let us know in the comments! And please no pile-ons over Dave Cooper’s mistakes. I’m sure he’s heard it all before.