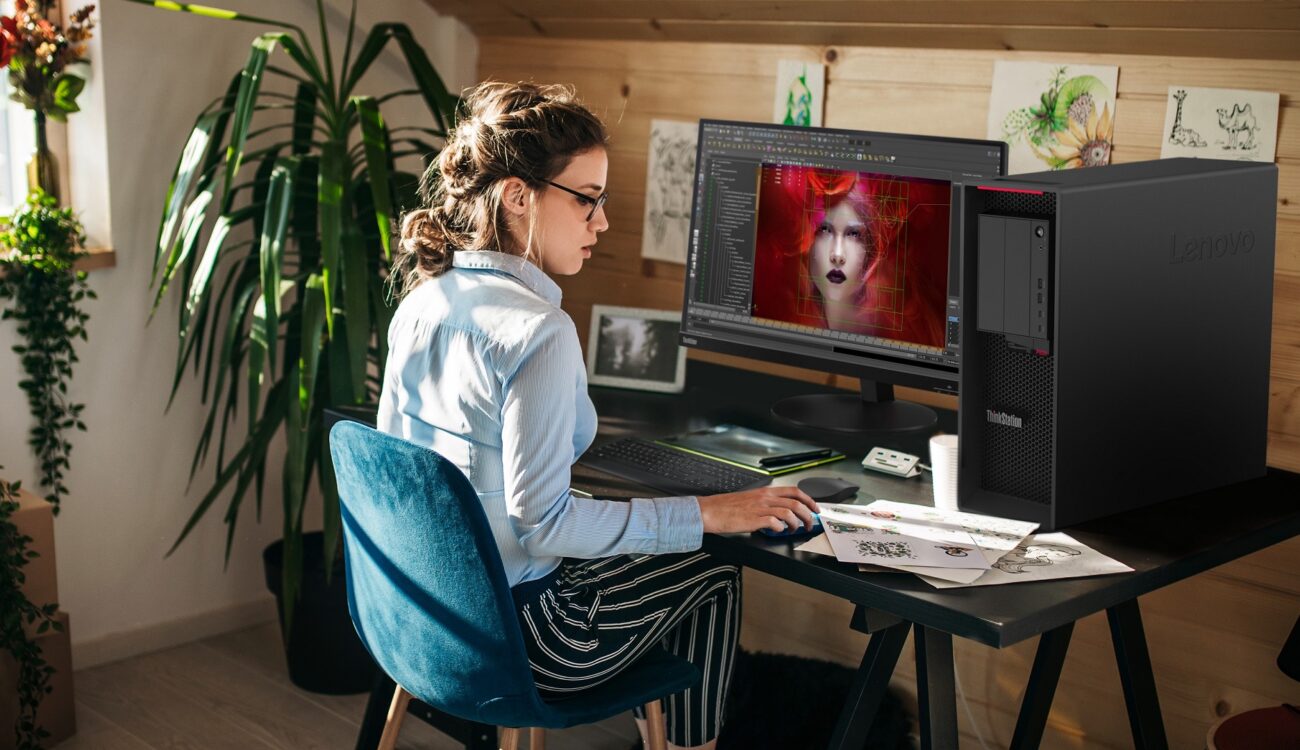 New PC workstation Lenovo ThinkStation P620 was just announced. Based on AMD’s new 64-core Ryzen Threadripper PRO CPUs, the workstation supports up to two NVIDIA Quadro RTX 8000 or four RTX 4000 graphics cards, up to 512GB DDR4 memory, and up to 20TB of storage. Despite its powerful internals, ThinkStation P620 is completely air-cooled. It will be available in September 2020.

For those Windows PC users who prefer buying a complete factory-made and fine-tuned computer, rather than building it on their own, Lenovo just announced a new interesting workstation – ThinkStation P620. They claim it is the world’s first workstation based on the AMD Ryzen Threadripper PRO CPU which offers up to 64 cores and up to 4.0GHz. Let’s take a quick look at the new ThinkStation.

The Ryzen Threadripper PRO is AMD’s brand new “flagship” CPU. According to Lenovo, it is supposed to be one of the most powerful single-socket CPU platforms and even rival existing dual-socket solutions. With up to 64 cores, Threadripper PRO processors also offer clock speeds up to 4.0GHz, 128 lanes of PCIe 4.0 bandwidth, and 8-channel memory support.

Prior to today, traditionally the max core count that a single-CPU system could handle was 18 cores, while the highest a dual-processor system could support was 56. According to Lenovo, ThinkStation P620 enables users to achieve seamless 8K streaming in real-time, reduced render times, ultra-fast simulation solving, quick assembly rebuilds, and smooth interactivity with 3D assets.

The motherboard has been built around the AMD 2019 Premium Chipset BXB-B. The PC can be equipped with up to 6 total drives (4 internal storage bays) – maximum two M.2 PCIe SSDs with 2TB (4TB max in total) and a maximum of four 3.5″ HDDs (16TB max in total). Maximum 20TB of storage.

The ThinkStation P620 supports up to two NVIDIA Quadro RTX 8000 or four RTX 4000 graphics cards, and up to 512GB DDR4, 3200MHz of memory (8x64GB DIMM modules). Lenovo also says the ThinkStation P620 is the first and only PCIe Gen 4 (offering twice the bandwidth of PCIe 3.0) workstation available today.

The dimensions of the ThinkStation P620 are (WxDxH) 165 x 460 x 440mm (6.5″ x 18.1″ x 17.3″) and it weighs 24kg (52.91lbs) in maximum configuration. All the internals are being powered via a 1000W power supply with 92% efficiency. Lenovo also claims they have collaborated with AMD on creating a custom-designed heat sink for better CPU heat management. The whole PC is air-cooled, not water-cooled.

The ThinkStation P620 will be available starting in September 2020. Pricing will, of course, depend on the final hardware included.

What do you think about the new ThinkStation P620? Do you see it as a potential “Mac Pro killer”? Let us know in the comment section underneath the article.