Aputure really tries to improve and expand their line of Light Storm fixtures and accessories. Alongside their new C300d light Ted Sim runs us through a bunch of new accessories. One thing to mention in order to avoid confusion: All these accessories are compatible with the new Light Storm C300d, too. Thanks to the dual-fan system heat is not an issue here. Basically, it’s a mix’n’match system.

First up is the new Light Dome mini which is basically a smaller version of the already available original Light Dome. 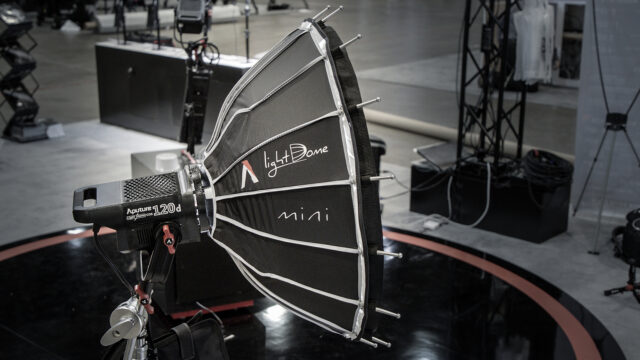 It’s way more compact than the orignial one which enables yout to put in tight spaces and still get a pleasantly soft light source. Also, now there is a grid available for the Light Dome mini. It’s a 45° grid which helps you controlling the spill of the light. The whole dome is made out of very durable fabrics normally used for parachutes.

Included with the Light Dome mini itself comes a fitting speedring. That is really good news because normally you have to source that kind of accessory for yourself, increasing the actual price for a decent light dome. Aputure is able to bundle the speedring because the whole Light Storm ecosystem is based on the popular Bowen-S mount and therefore every accessory fits on every fixture. Nice!

They’ve managed to design the translucent fabric of the Light Dome mini in a way that it won’t produce a green of magenta color shift. As obvious as it sounds, it’s good to see that the engineers got this essential yet very important feature right.

A New Kind of Spacelight

Another cool product is the Aputure Spacelight attachment. It’s simply the outer fabric of a spacelight which fits the Light Storm line of fixtures by just strapping it onto the bare light itself. Since the Light Storm lights have a very wide 120-degree beam angle if nothing is attached to the Bowen-S mount, they’ll fill out the whole spacelight attachment easily. It’s made out of the same tough yet color accurate fabric as the Light Dome mini.

The Light Dome mini will be retailing for $99 (the original Light Dome is $150) and it should be ready for shipping in about one month. The Spacelight attachment is even more competitive in terms of pricing: It will be available for under $50 (assumingly $49).

What do you think of these new accessories? Ready to do some serious lighting? Let us know in the comments below!