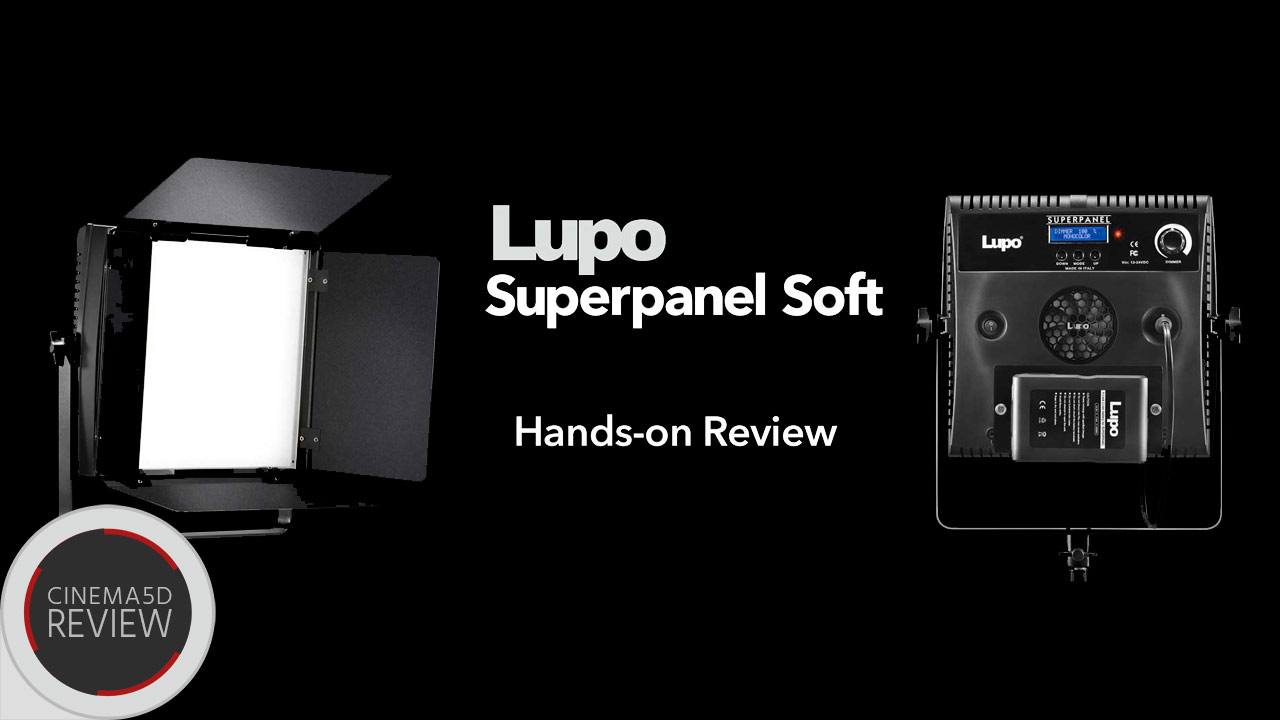 This is a guest review by director of photography and cinema5D reader Scott Leslie who took a close look at the new Superpanel Soft from Lupo.

For over a year I’ve owned, used and abused a couple of the original Lupo Superpanel. They’ve been a great workhorse 1×1 LED panels and are incredibly bright with its 22,000 LUX output at 1 meter. But they’re not soft lights. I very rarely shine them directly on my talent/actors. Instead I’ll put them through a DOP SnapBag softbox or a diffusion frame or bounce them off a bounce card. When I heard that Lupo was making a “soft” version of the Superpanel, I couldn’t wait to get my hands on them!

Lupo’s Superpanel Soft creates a nice even soft source which is perfect for lighting talent. What’s unique about the Superpanel Soft is the diffusion is offset off the LED panel by 1 1/4 inches. With most LED panels, the diffusion sits right up against the LED lamps – but by offsetting them, Lupo has insured a nice even spread across the face of the diffusion – no hotspots, just a nice consistent output from edge to edge. Unlike other 1×1 panels that have a piece of diffusion that you slide right in front of the lens, Lupo has removed the lens so behind the diffusion are raw LED circuits creating an even softer spread of the light. Because of this technology the diffusion is fixed and cannot be removed.

The Superpanel Soft is also available with an DMX option. DMX allows you to hook the light up to a DMX controller (which can be relatively cheap) and control both the dimmer and the color from the board. This works great if you’re flying the lights up in a grid.

The spread of light that Superpanel Soft gives looks to be around 60 degrees where the original Superpanel is around 40 degrees. This wider spread can open up some lighting options for you. For example, you can bring in the Superpanel Soft in closer while shooting a 2 shot and still get the coverage.

Inside the Lupo Superpanel Soft are 400 LEDs with True Color Technology, giving a CRI (Color Rendering Index) of > 95 and a TLCI (Television Lighting Consistency Index) of > 96. These numbers are from Lupo’s website. Unfortunately, I don’t have a spectromiter to do the test myself.

I wanted to check out how the Lupo Superpanel Soft worked in a typical interview situation and I also wanted to play with fill light ratios. I find that it’s easy to fall into the same patterns with your shooting style, so I wanted to test the different looks you can get by incrementally raising your fill light from 0 to a 1 to 1 ratio with the key light. And finally, because I do a lot of beauty shooting, I wanted to play with further softening the Superpanel Soft by putting modifiers in front of it. Here are the results of my test.

The Superpanel Soft is a great tool to have in your lighting toolkit. It creates a nice even soft source for your talent/actors and it can be further softened through adding modifiers in front of it – producing a super soft source. Because it’s built on the same frame as the original Superpanel, I can vouch that it is a really durable, well-made light. I’ve had a couple of the original Superpanels for over a year now and they’ve been on feature film and short films, commercials and industrial videos with me and I haven’t had a single issue with them.

One thing that I did discover is when running the Superpanel Soft on a V-Mount battery, you’ll need 180/190Wh battery or higher that’s preferably 14.8V. My 150Wh batteries that are 14.4V couldn’t power the light at 100% power for more than a few minutes. They do work on a lower power setting.

The Lupo Superpanel Soft has literally just been released and will be available soon at B&H starting at $1,049 for the daylight only or tungsten only version and going up to $1449 for the dual color with DMX version. Barn door and other accessories are sold separately. We will update this post as the light becomes available.

Are you in the market for a new LED light? Will you consider the Lupo Superpanel Soft? Let us know in the comments below.