In the 9th episode of our talk show ON THE COUCH, we had the pleasure of talking to Neil Anderson, Sales Manager of our show sponsor Tools On Air, an Austrian company providing professional, yet easy to use software solutions for broadcast. Tools On Air provided us with their application Live Cut for the show recording – a piece of software that allowed our editor Katharina Dietl to cut between the 3 cameras in realtime, while running all three 1080p streams into the Mac Pro simultaneously, and generating an EDL with Live Cut. The EDL could then easily be exported as a multicam clip for Final Cut Pro X, 7 or Premiere Pro – which allowed us to change edits afterwards freely, before finishing and uploading each show. A very convenient and efficient solution to deal with multicam recordings, without which we would have been unable to deliver shows without starting from scratch with an edit after the recording wrapped.

(Big thanks also to Oliver Deutsch from Tools On Air, who was invaluable support on site, helping us set up the Live Cut system and maintain it properly.) 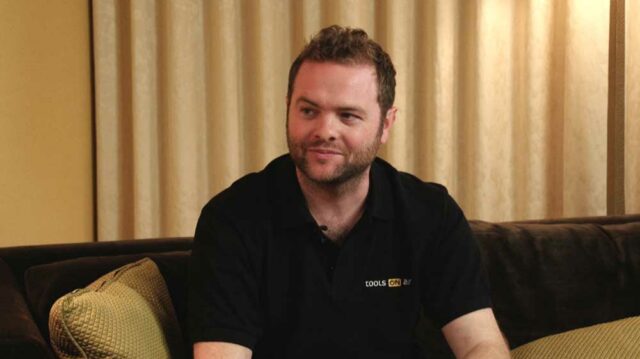 Having said that, the scope of the topics covered in this talk with Neil Anderson is much wider than their products – we talked about the importance of ProRes and what it became for both the post-production as well as the production industry, with more and more camera manufacturers putting ProRes acquisition right into their products. Neil talks about how they were surprised by the LACK of demand for 4K in the broadcast market – and how he cannot see 4K catching on in broadcast for most markets anytime soon. Nevertheless, the changes in the TV, post-production and broadcast world are ground-shattering, and we talk about how individual manufacturers like Blackmagic Design are challenging the markets with extremely low prizes and innovative products that were simply not available for a wider audience before. We talk about how the broadcast industry needs to readjust to the reality of audience behavior changing and moving to online delivery.