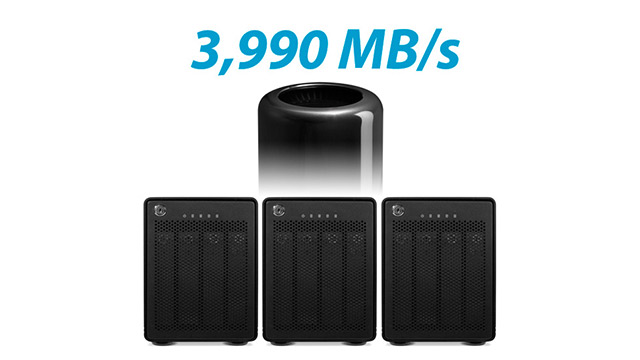 [UPDATE]: We’ve received numerous e-mails with claims that the benchmarks by OWC are incorrect. The title of this article has been updated accordingly.

Especially filmmakers and editors have been waiting for affordable and fast thunderbolt based storage solutions, a few of which we’ve finally seen hitting the market last year.
Just a few months ago OWC introduced their ThunderBay line of 4-drive external RAID-ready storage solutions, recently refreshing it with Thunderbolt 2 connections.

It is available in configurations from 4TB up to 16TB and also offered as a diskless enclosure that goes for $429.

Several of the OWC drives can be chained together using a combination of the two Thunderbolt 2 ports it has. However the great speeds described can only be achieved using a Mac Pro that sports 6 separate thunderbolt connections. This is how OWC achieved speeds of nearly 4,000MB/s.

The benchmark testing showed 3,990MB/s read and 3,802MB/s write speeds, running an HDD array of 3x 12TB OWC ThunderBay 4 drives. They achieved similar numbers running SSD drives.
[UPDATE]: numerous e-mails with claims that the benchmarks by OWC are incorrect. In different benchmark tests the maximum speed that could be achieved with the method described here would be 1902 MB/s. OWC says:
The Mac Pro has a total of six Thunderbolt 2 ports connecting to three separate Thunderbolt 2 busses, with two ports to each bus. We connected one ThunderBay 4 to one of the two ports available for each bus to get the maximum performance. Those three ThunderBay 4 enclosures were made into a single RAID-0 array using the built-in software RAID-0 in OS X. We then fired up the benchmarking tools and watched in awe at the performance the ThunderBay 4 enclosures achieved.

This combination of performance and storage comes at a fraction of the price of rack-based storage.
The ThunderBay 4 enclosures generally got very good reviews. Other, less affordable, but proven solutions include the new G-technology external RAID drives and the Promise Pegasus RAID, both of which are now also compatible with Apple’s new Thunderbolt 2 standard.