Panasonic has just introduced a new mirrorless camera for creatives and vloggers: the Panasonic LUMIX G100. This new camera features a 20.3MP MOS Sensor, and it can record in 4K at up to 30p and up to 120 frames per second in HD 1080p. The LUMIX G100 has Bluetooth and Wi-Fi connectivity to publish your creations on social media quickly. The optional tripod grip allows you to start/stop video recording and shutter release, which makes it easier to use for vloggers. We caught up with Tamar from Panasonic to hear more about the video capabilities of the camera. Here is our Panasonic LUMIX G100 first look. Let’s dive into it! 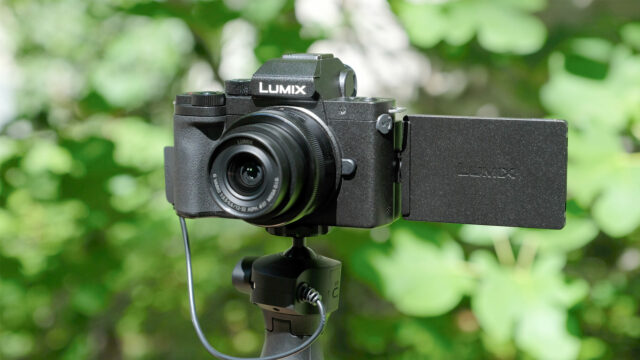 Panasonic LUMIX G100 – Redesign from the Ground Up

The Panasonic LUMIX G100 could be the descendant of the LUMIX G90, but it’s not. The least we can say is that Panasonic redesigned the G100 from scratch. 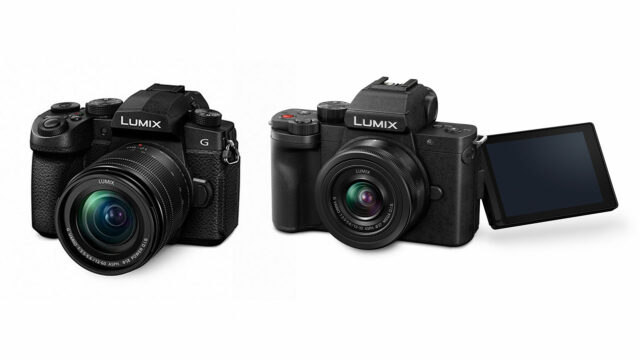 Panasonic LUMIX G90 on the left, and LUMIX G100 on the right. Image credit: Panasonic

As you can see, besides being (much) smaller, the G100 has fewer buttons and dials. The design is more minimalist and it is more straightforward to use. The Panasonic LUMIX G100 is now targeted towards vloggers like the recent Sony ZV-1 that we reviewed. With a weight of only 412 grams (with the 14-42mm lens) and a battery life of around 80min in 4K recording mode, it seems like a great compact and lightweight camera to always bring with you. However, the G100 remains a mirrorless camera, which means you can swap out lenses, and it has robust shooting capabilities. 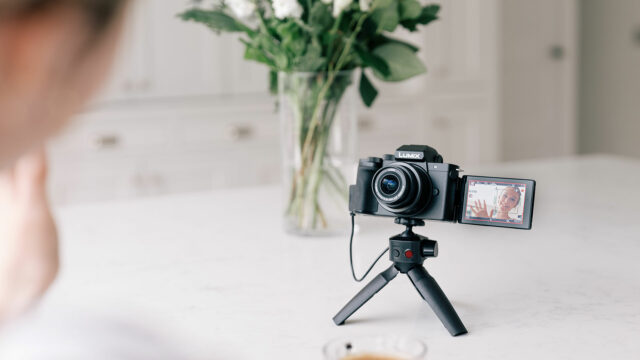 The Panasonic LUMIX G100 boasts a 20.3MP MOS Sensor – it is a 4/3 sensor (17.3mm x 13.0mm) – without Low Pass Filter, to minimize moiré. It can shoot videos in 4K UHD at up 30 frames per second in MP4: 30/25/24p in PAL, 30/24p in NTSC (100Mbps). If you drop down in resolution, you can shoot in 1080p at up to 60 frames per second (28Mbps which is rather low and a bit disappointing). Also, a dedicated Slow&Quick mode allows you to capture up to 120fps FHD footage, with a recording limit of 10 minutes per clip. Finally, there is a time-lapse mode as well as supports for V-Log L (LOG picture profile) recording. (Installed already. Separate purchase is not required. 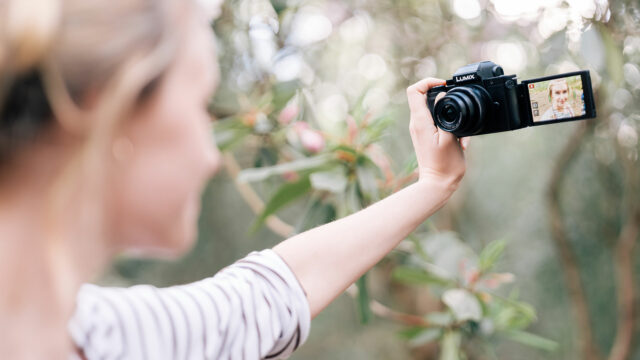 For low-light situations, the Panasonic LUMIX G100 maximum ISO is 25600. Also crucial for vloggers is the 5-Axis Hybrid I.S. (Image Stabilizer) that combines Gyro Sensor stabilization with lens stabilization. Of course, you need an MFT lens with image stabilization to get all the benefits, but that should help you capture more stable footage when walking and talking to the camera. We were told by Panasonic that due to its compact size, it was not possible to include in this camera a sensor-based stabilization system (IBIS). 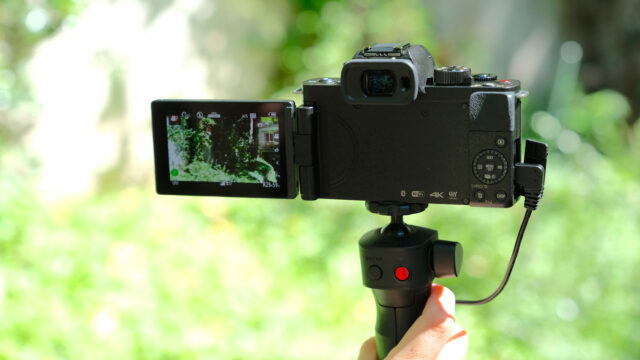 Talking about vlogging, the G100 features a new Video Selfie Mode. The Video Selfie mode won’t allow you to separate your subject from the background as according to Panasonic they do believe that the subject of  Vlogging (You), should be part of the action (Background).

There is a couple of other nice tools for vloggers, including: 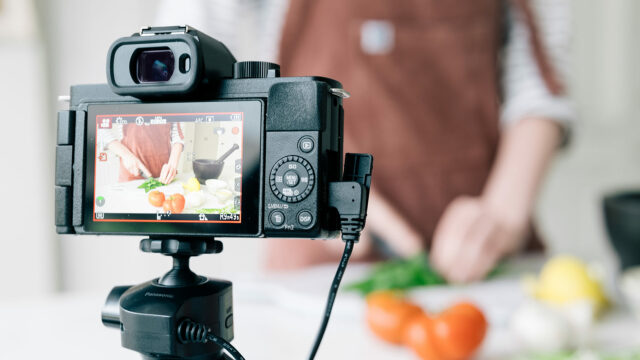 There is a REC Frame indicator around the screen. Image credit: Panasonic 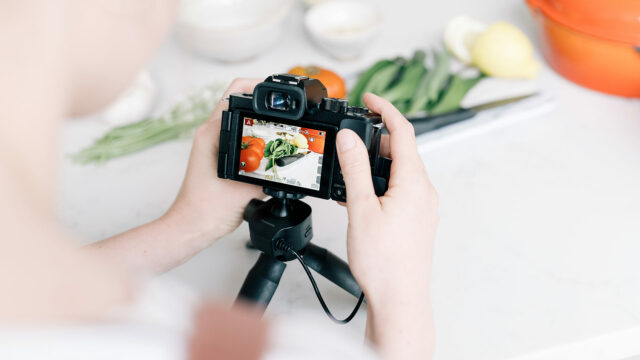 Camera manufacturers are putting more energy on the audio-side of their cameras lately, which is excellent. For the first time in a mirrorless camera, the LUMIX G100 integrates OZO Audio by Nokia. This audio technology allows you to capture and edit “the full richness of sonic life with vibrant accuracy and precision.”

In short, there are three built-in microphones to obtain the most realistic sound possible. All you have to do is select the most suitable model for your scene, like landscape interview or vlogging. Also, there is an audio Tracking mode that keeps tracking the voice of the target subject. The audio tracking feature is linked with the Face Recognition autofocus. If you don’t want to mess with sound settings the Auto mode will automatically switch between the Tracking mode and Surround mode. 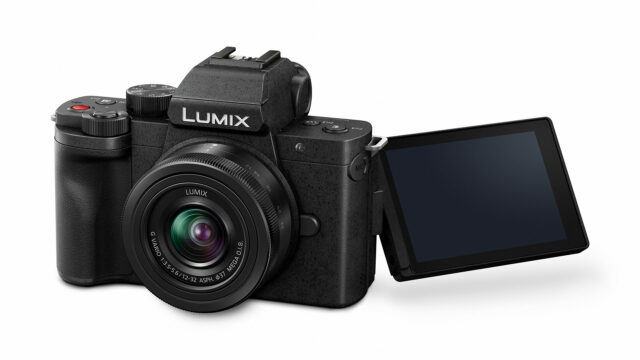 Finally, if you want to further push your audio quality, there is a 3.5mm microphone input on the left side of the camera to connect an external microphone. You can adjust the sound input level manually, but strangely there is no headphone jack. 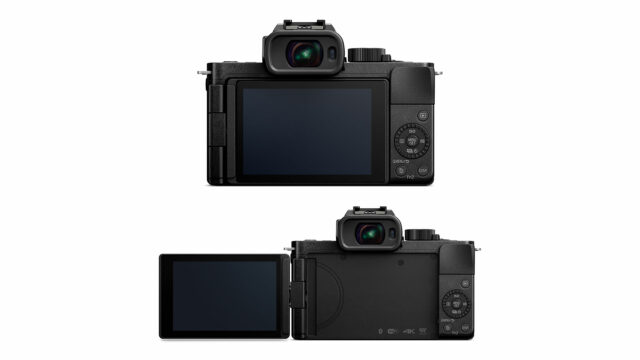 At the back of the LUMIX G100, there is a 3.0-inch flip-out touch screen display. The resolution of the screen is good at 1,840K-dot, and the articulation should make selfies and high/low-angle framings a breeze. If you’re shooting in bright sunlight, there is also a 3,680K-dot equivalent center-aligned electronic viewfinder. 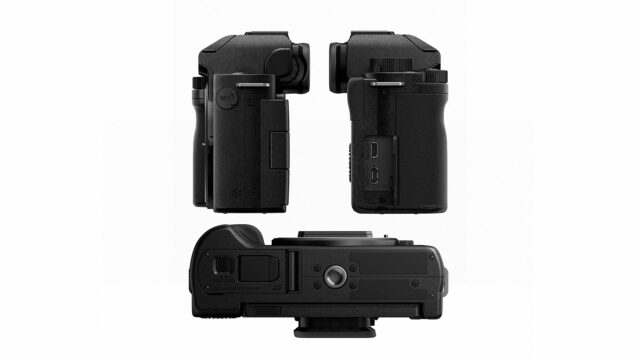 On the right side of the G100, you’ll find a micro-HDMI port and a micro-USB port to control the camera. I admit that I don’t understand why Panasonic didn’t choose a USB Type-C connector. You can recharge the camera’s battery either via AC or USB. The HDMI port can be used to transform the G100 onto a webcam but only via a dedicated capture device. (CAM Link 4K for example). 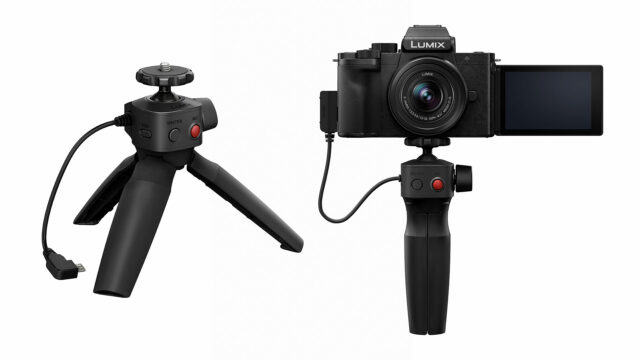 To easily film yourself, Panasonic also introduced a new tripod grip (DMW-SHGR1) that allows you to start/stop the recording of the camera, take pictures, and put the camera in sleep mode. The grip connects to the camera via the USB port and is relatively lightweight at only 102 grams. This new grip is compatible with the other models, like the LUMIX GH5, GH5S, G9/G95/G90, and G80/G81/G85. For the grip powering, there is no need for additional batteries as it will be powered by the camera itself via the USB micro connector. 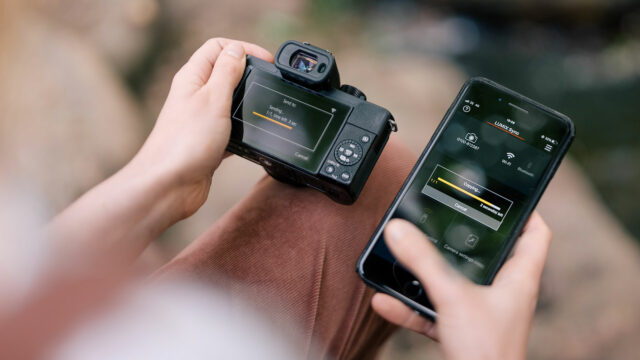 Like every good camera for vloggers, the LUMIX G100 integrates Bluetooth and Wi-Fi® 2.4GHz (IEEE802.11b/g/n) connectivity. There is a dedicated button to transfer your photos/videos to your iOS/Android smartphone via the LUMIX Sync app. Also, you can use your smartphone to control your camera wirelessly. Please note that when you connect the camera to the LUMIX Sync app, you’ll have to register the G100 in the app. After this, it is enough to have Bluetooth on and the transfer button will trigger the transport. 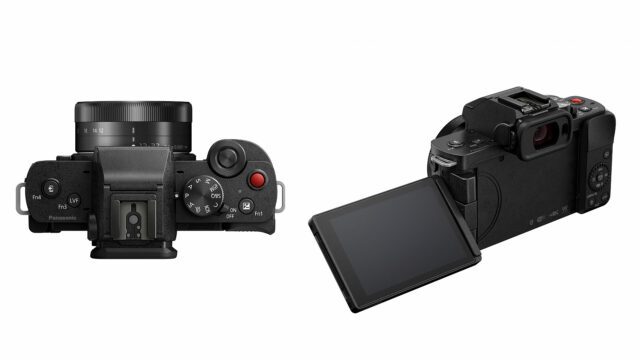 If you don’t want to use your smartphone, you can convert RAW images into JPEG right on the camera. It is also possible to divide video clips and resize/crop pictures in the camera. 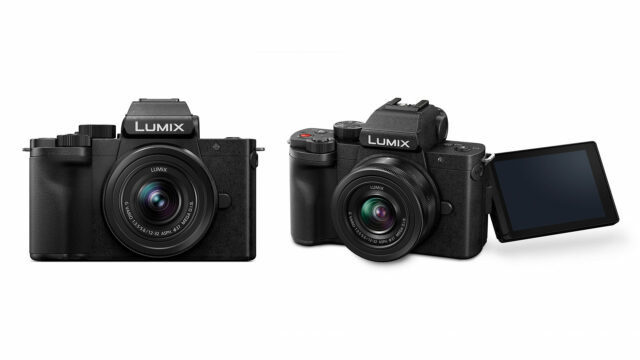 What do you think about the Panasonic LUMIX G100? Which features of the camera are the most useful for you? What is your go-to camera for vlogging? Don’t hesitate to let us know in the comments below!