Please welcome two new compact cameras from Panasonic: the LUMIX GX9 and the fixed-lens travel camera TZ200. While the latter is a more compact point-and-shoot camera, the GX9 may prove to be a possible competitor to Sony’s full-grown lineup of mirrorless cameras. 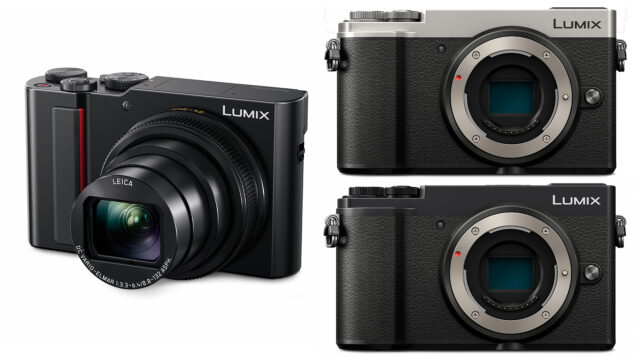 The Panasonic LUMIX GX9 is an evolutionary step-up from its predecessor, the GX8. It’s heart is still an 20.3MP Micro Four-Thirds sensor, but this time around the image stabilization features have been improved significantly. The LUMIX TZ200, on the other hand, features a retractable Leica DC Vario-Elmar 1:3.3 – 6.4 / 8.8-124mm lens (35mm camera equivalent: 24-360mm). That’s a zoom factor of 15! Both cameras sport a tilting touch screen and a built-in flash.

The killer feature over its predecessor is clearly the new 5-Axis image stabilization of the LUMIX GX9. Combining an O.I.S. (Optical Image Stabilizer, 2-axis) and a B.I.S.(Body Image Stabilizer, 5-axis), the 5-axis Dual I.S. compensates for a larger range of movement than the GX8 ever could. Handheld shooting with a tele lens in low light? Yes, indeed!

If that’s not enough, Panasonic has another trick in store for you: the LUMIX GX9 adopts an electromagnetic drive in the shutter unit, which reduces the shock caused by the movement of the shutter diaphragm and also its sound. This is more of a photography-oriented feature, but still nice to have. Less *click* sounds for behind-the-scenes stills!

What I find a bit weird is the lack of support for some video related use cases. No V-log recording. No video out for attaching an external monitor. No audio in for an outboard mic (and of course No headphone socket). Why? If Panasonic wants to compete with Sony in this field they have to push a little harder on video features like these. Since the Sony cameras also lack sufficient connectors, this would have been a great advantage for Panasonic. The LUMIX GX9 is 124 mm x 72.1 mm x 46.8 mm in size and weighs 450 g.

In terms of imaga stabilization, the LUMIX TZ200 also gets an upgrade: 5-axis HYBRID O.I.S. + ensures shake-free images even when shooting handheld. But again, no connectors for external video and/or audio. And no V-log.

These upgrades won’t kick off a revolution, and the updated specs are rather evolutionary. This is nice, of course, but might not be enough if Panasonic wants to compete with Sony on the video front.

The missing video related features like V-log, video out and audio in will put a lot of potential customers off, talking of course from an indie video perspective. For photographers, the continuous 9fps AF of the LUMIX GX9 might be a winner. I had hoped for a few more video features… but these two cameras won’t be the last new releases for 2018, that’s for sure!

What are your experiences with small(er) sensor Panasonic cameras? Share your thoughts in the comments below!