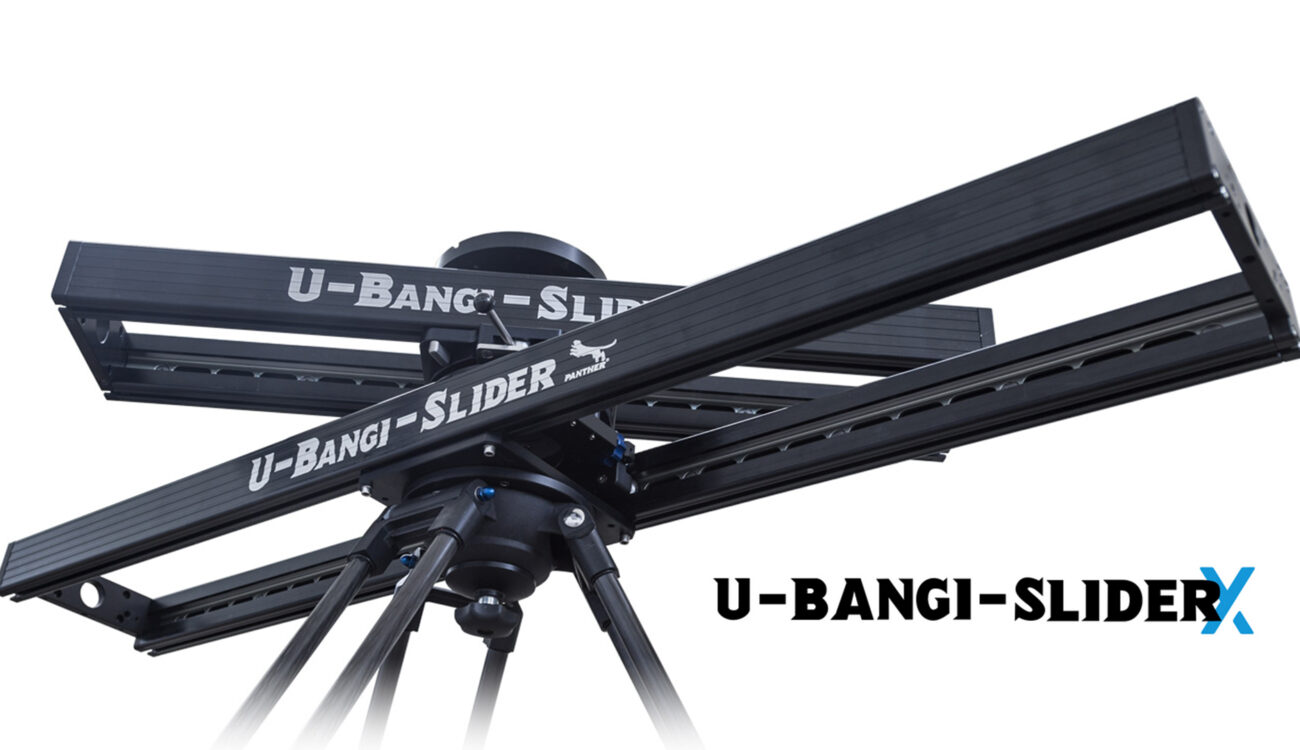 Panther has released an upgrade for their existing line of high-end Sliderx: the U-Bangi-Slider XY. With it you can combine two U-Bangis resulting in a very neat two-axis slider.

You may have heard this strange name before: U-Bangi. It’s the name of Munich-based company Panther’s high-end, no-compromise camera slider system for serious movie applications. Not something you can just throw in a backpack and take on the go with you. Also, not something you can get for a three-digit figure. Neither is it light-weight nor does it fold. On the other hand, this slider is here to perform, even with the heaviest camera setups and under the harshest conditions. You get the point, right? Enough with the introduction, then.

The U-Bangi-Slider XY is a two-in-one system. Take two existing Panther U-Bangi sliders and combine them to get a U-Bangi-Slide XY. Done.

The real beauty of this XY version is that it simply combines two already-existing products with a 360° swivel. Everything stays compatible and you don’t have to buy a completely new slider, which is ideal as the original U-Bangi-Slider is pricy enough already. Every existing U-Bangi slider can be upgraded to a U-Bangi-Slider XY.

With the U-Bangi-Slider XY you end up with two sliders in one, and the range of possible camera movement expands exponentially as you’re not limited to a single straight axis any more. Watch the video below to get an idea of what’s possible once you have an X-axis and an Y-axis at your fingertips:

You are free to choose which different lengths of U-Bangis you wish to combine. For example, you could take a 48cm/1,6′ U-Bangi Track and a 64cm/2,1′ one. Or a 88cm/2,9′ track and a 136cm/4,5′ version. Other lengths seem to also be possible, as Panther claims on their website that “further configurations possible on request”. Since we’re talking high-end here, the customer is really king here. Just say what you want (and pay for it).

Features of the U-Bangi-Slider XY

Another nice feature of the two-in-one concept is the ability to extend the bottom slider. The operator can define precisely how much the top slider should extend over the bottom one, which could come in very handy when shooting in tight spaces. This way, the U-Bangi-Slider XY can be a more compact slider than you might think at first glance.

I think this is a great tool for achieving visually appealing shots which wouldn’t be possible without the two-axis design. The whole concept is very easy but at the same time super versatile.

There is no pricing available right now, but you’re free to contact Panther directly and request a quote for your dream setup. But be warned: this won’t be cheap! On the other hand, the U-Bangi-Slider XY may be the last slider you’ll ever need. Now that’s peace of mind, isn’t it?

Panther is a manufacturer of high-end grip equipment such as camera cranes or dollies. So to be honest, the whole lineup of Panther products might be a better fit for rental houses in the first place.

EDIT: Due to the ongoing discussion in the comments I’ve contacted Panther for an official statement. Here it is:

Thanks for your Message. We saw your piece about our new U-Bangi-Slider XY as well as the discussion.I would like to clearly point out that our choice of product name has absolutely no racist background at all. We are a company operating internationally and have no interest in racist statements in any form.The first slider was developed in the mid 80’s. The origin of the product name ‘U-Bangi’ goes back to the year 1986 when we presented the first slider. It was called “Komfort-Seitenausleger-Drehbar” (comfort-outrigger, turnable). A baffled customer at a New York trade show thought the name was rather complicated and commented „Hey, that just looks like a U-Bangi“ – an African tribe whose members extend their lips in a u-shape for beauty purposes. From that moment, we called this product ‘U-Bangi’. In 1988 we registered the name with the German Patent Agency, registration number Nr. 1 130 370. Since then it has become a world recognised name and from its beginning until today has had no racist connection whatsoever. – Andreas Fitz, CEO

Do you have any experiences with the original U-Bangi? Would you consider buying (or renting) one? The comments section is all yours!