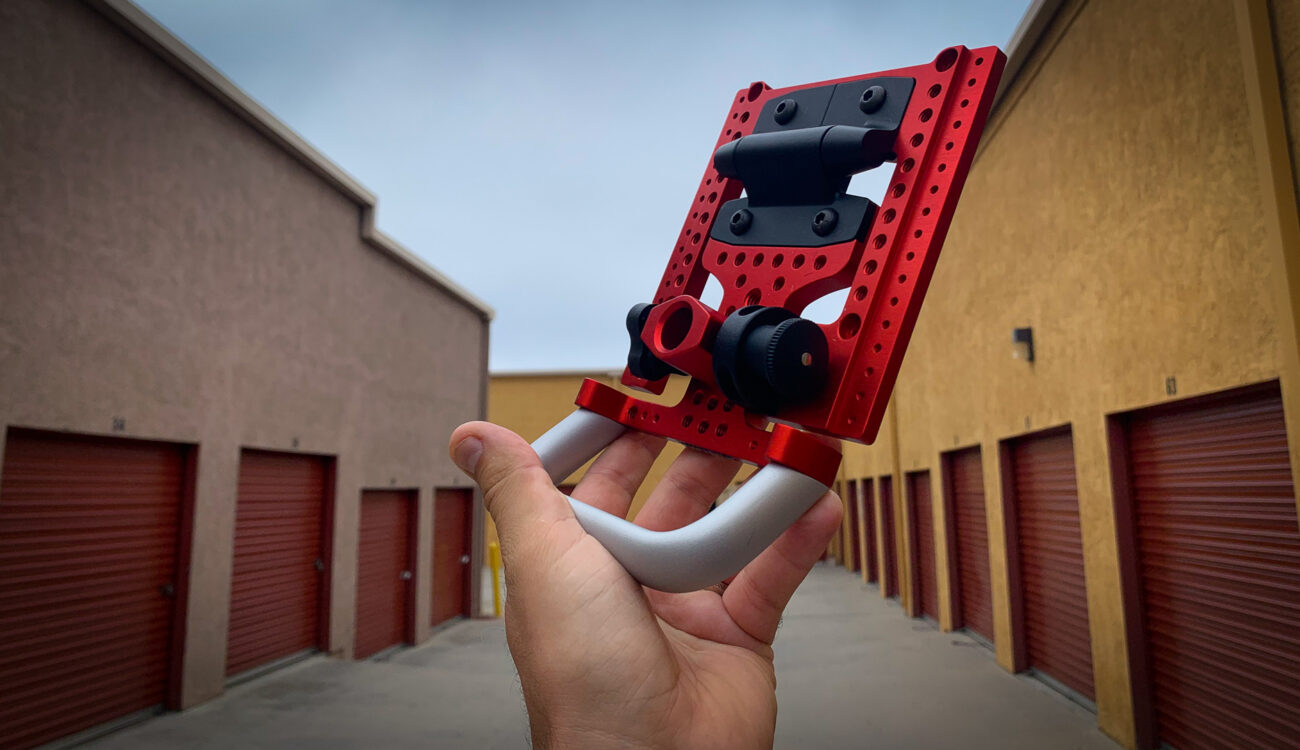 We first mentioned the Para Mount VESA from Rigidesigns back in January and since then the company was nice enough to send over a demo for testing. Has this device solved some of the pain points associated with monitor mounting? Let’s find out.

One of my great joys of working in production is the never ending quest for optimization in the form of work process or of the tools we use. The Para Mount is a snazzy (when purchased in the color red) tool for optimizing video village, your post monitor setup or an on-set DIT setup. Yes, there are other monitor mounts on the market, but we’re just now getting to a place where transitioning a monitor from being stand mounted to placing a monitor low on a desk isn’t a hassle — the Para Mount helps with this transition.

The $259.00 Para Mount is VESA 100×100 compatible and is available with an optional battery plate as well (more on that later). For my testing I used the mount alongside the 17″ SmallHD 1703-P3X monitor that weighs in at a little over 12 lbs depending on mounted accessories. On paper, the Para Mount is rated up-to 35lbs and you can feel that weight allowance in the build of this device — it’s aluminum and steel design seems impervious to the rough and tumble nature of working on-location. I have no doubt this mount can take much larger and heavier monitors then the one I tested it with.

There are other select C-stand monitor mounts on the market, but many of the monitor mounts out there are aimed at home users and just aren’t suitable for working in field production. They also tend to work on stands or on desks and not on both. At $259.00 the Para Mount feels like it has a premium price-tag and I’m guessing it has a life span that will out live many, many monitors that it is being used with.

Works on Desk or Stand

The Para Mount is designed to work in two core configurations: either on a stand or on a desk. Simply pull the knob (pictured above) to unlock the pivoting action and with a little physical effort you’ll be able to pivot the mount to set on a desk or on a stand. The hinge itself takes some strength to move between these two configurations and I suggest screwing the mount to the monitor first to give some needed leverage.

Some production oriented monitor manufacturers are becoming better with this, but many monitors are still lacking 1/4″- 20 screw holes for mounting accessories and the Para Mount comes with all sorts of mounting points for wireless receivers along the sides of the device.

I particularly love how compact everything is once you fold the mount back into its transport setting when the monitor is not in use. Most users will find that the mount will easily fit into whatever travel case they’re transporting their monitor in without needing to un-screw the mount from the monitor. These are little things, but they become one less prep item you need to do before shooting can begin on the day, so keep that in mind that these little conveniences add up to time saved and, as a result, more shots.

Rigidesigns also sent along a black $79.00 “wing plate” for testing that easily affixes to the back of the Para Mount and leaves more spots for a battery plate or additional accessories depending on your setup. If your monitor already has a spot for a battery plate then this accessory may not be necessary for you as the Para Mount itself has plenty of well-placed mounting points for wireless receivers. The wing plate doesn’t transport well attached to the Para Mount since it prevents the mount from hitting its most compact configuration, but it takes just seconds to remove and stow elsewhere in your monitor travel case for adding later.

While shooting I found myself using the part of the mount that doubles as the desk stand also makes for a secure way to carry the monitor from place to place. This carrying solution is better than the handle SmallHD sends along with the 1703-PX3 monitor that I’ve found has a tendency to pinch your hand if you aren’t careful.

Obviously a good accessory can mean you get more longterm use out of the piece of kit it’s being used on. With the Para Mount you’ll find that taking your field monitor into your office for a quick color check on a editing project or into the field for use as a client or director monitor is less of a hassle then it’s been in the past. I’m looking forward to seeing what else Rigidesigns comes up with in the future that will help make our lives just a little bit easier while on-location.

The Para Mount ($259.00) and additional accessory wing plate ($79.00) can be purchased directly from Rigidesigns or through CVP.

Do you use production monitors? How to you set them up for your clients or the director? Let us know in the comments below!

I’ve been using this for location shooting with my AM21 and it sure beats the cheap amazon mount that needed replacing. The hinge is ridiculously strong yet easy to adjust with a slight push with your hand on the monitor. And the handle is a great plus to the design which is surely to outlast the monitor.
However, I’ve found the locking pin to be in the way when collapsing as it doesn’t recess automatically (like a door latch) it needs to be pulled out again to fold the mount completely. Yes, there are a ton of mounting holes, yet not in ideal spots. They are in the way of the hinge so anything you mount will get in the way once you’re ready to pack up. I’d like to leave the battery plate and teradek on the mount when folded. I’ve had to resort to articulating arms to get it to work. Maybe V2 will be improved. Overall it’s a great accessory.

I own one of thee for my Atomos Sumo and it is a GAME CHANGER!Bet monitor mount on the market.

Emmy winner, Graham Sheldon, resides in Southern California, where he works as a producer and director of photography. He is a member of the Producers Guild of America.