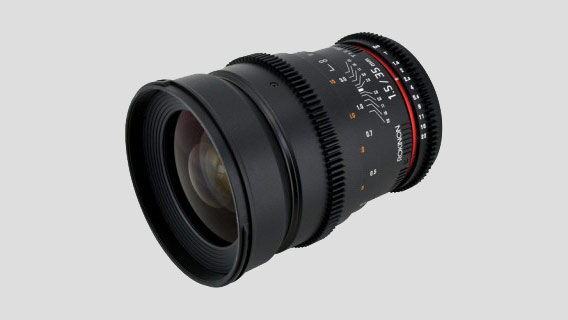 If you’ve been shopping affordable manual prime lenses for your HDSLR then you’ve probably stumbled upon or even own the famous Samyang / Rokinon lenses like the $500 35mm f/1.4 or the $400 14mm ultra-wide.

[UPDATE]: cinema5D member Gumzster informed me that the 8mm fisheye already exists as a cine version. This is very interesting news as gear focus rings and a smooth aperture control were the missing elements to make these lenses truly cine.

The construction of the new lenses has been based on previous types dedicated for photography. Their main feature are racks co-operating with follow – focus system, and a ring rotated continuously. Thanks to these alterations it is possible to precisely and silently operate focus and depth of field. Another facility is putting aperture and focus scale parallel to the axis of the lens and aperture marked with number of transmission T. Lenses are compatible with Nikon and Canon cameras.
The official Rokinon facebook account just announced that they’ve been developing cine lenses featuring smooth T-stop rings and they also appear to have built-in follow focus gear rings.

Before you get really excited keep in mind that these lenses are very affordable and while their build quality has been good for photography and HDSLR shooting we don’t know if these lenses will take the force a follow focus or even remote focus can sometimes put to these lenses.

We hope to have them in for review very soon, now that we’re starting to settle in our new office and cinema5D studio I will tell you more about at a later time.

The first Rokinon cine lenses will be for Canon, Nikon, and Sony Mounts.

Thanks to cinema5D member Impavido-7D for sharing this information with us.