Really Right Stuff, manufacturer of photo and increasingly also more video gear, is close to shipping the new high payload (around 30 lbs) 100mm bowl RRS FH-7240 tripod. Having used smaller payload video focused RRS tripods in the past, I’m enthusiastic about the new tripod head and carbon fiber sticks. Check out all details and our hands on video from Cine Gear 2018!

First off, you can tell a lot about a tripod by simply panning and tilting with a flagship cinema camera on it. In this case, I had a chance to use the tripod on the Cine Gear floor with a Canon C700 mounted on it and it feels great and, maybe most importantly, precise. Also, possibly because of the heavy use of carbon fiber/milled aluminum throughout the design it really doesn’t kill your back to lift the setup (without the camera on top). 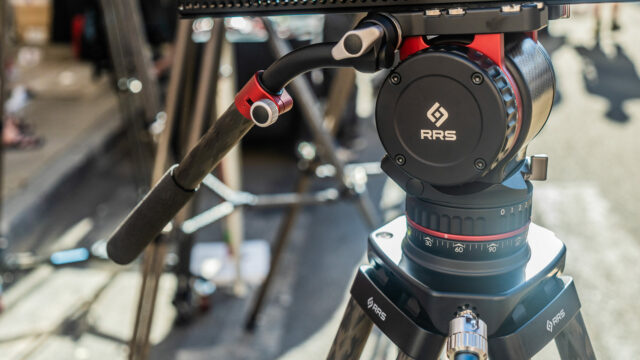 It should be noted that this tripod won’t be cheap necessarily — we’re looking at roughly $8K if you buy both the sticks and head. That being said, the cost falls in line with other high payload tripods in this category from other manufacturers like Sachtler, Miller or Vinten.

We’ve mentioned this tripod in the past and RRS has been working hard to get the tripod into full production. We’re told that we can expect the sticks and head to begin shipping later in the year. Specc lists don’t always tell the full story and in my limited time spent with the RRS FH-7240 I was impressed. Looking forward to a future field review.

Are you in the market for a new tripod? What do you think of Really Right Stuff?