Saramonic has just released an upgraded version of their popular SmartRig+. As a major change we notice the lack of a traditional 3.5mm jack. Instead a tiny lightning plug seeks connection to your latest iPhone model.

There’s no shame in filming with your phone anymore. In fact, the camera systems of the latest generation of smartphones are very capable. But there’s one thing you shouldn’t forget about: Decent audio is a must when putting together your film. This is where the all-new Saramonic SmartRig+ Di comes into play. It is designed especially for iPhones.

The SmartRig+ Di looks almost identical to the original SmartRig+ (read all about it here and on this episode of cinema5D essentials). Don’t be fooled, though, the tiny Di label indicates that we’re entering the digital domain. The unit still sports two full-sized XLR inputs with dedicated level controls and 48V phantom power. That way you can connect professional microphones to the unit. A headphone output for monitoring can be found at the bottom of the unit, that’s a real 3.5mm headphone out, just like that! iPhone users rejoice! Airpods are not supported yet though. 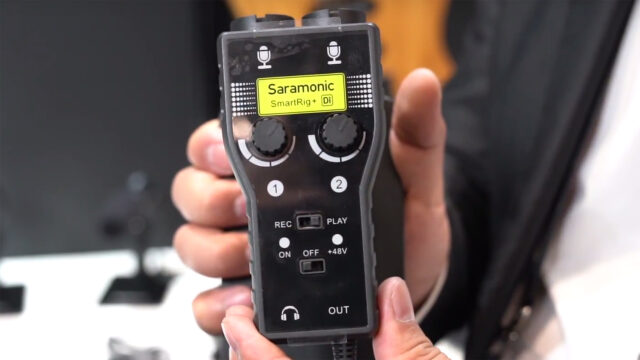 The major difference between the original SmartRig+ and the Di model is the fact that there is an ADC (analogue to digital converter) built-in. Somwhere within the unit the analogue signal coming from the microphone needs to be 1) amplified, 2) leveled and 3) converted to a digital signal which gets sent out via Lightning connection to your smartphone. In terms of sound quality that’s a plus. Think of the Saramonic device as an outboard soundcard for your iPhone.

Older iPhone models which use the old-fashioned 3.5mm audio input would need to convert an incoming analogue signal from the original SmartRig+ from A to D internally. According to Saramonic, poor(er) sound quality is the result. So the little Di can potentially make a huge difference there.

The problem with the upgraded hardware and the additional ADC is an increase in price. Although the unit looks almost identical to its predecessor, the Saramonic SmartRig+ Di sells for around $200. The original SmartRig+ is just below $100.

If you’re a proud owner of an iPhone 8 or even X this might up your game in terms of sound quality. Plus, you’ll be able to monitor your audio in the first place and make use of pro microphones. Not bad at all. The SmartRig+ Di will be available next month.

Are you using your smartphone as a cinematic device already? What about audio? Share your experience in the comments below!