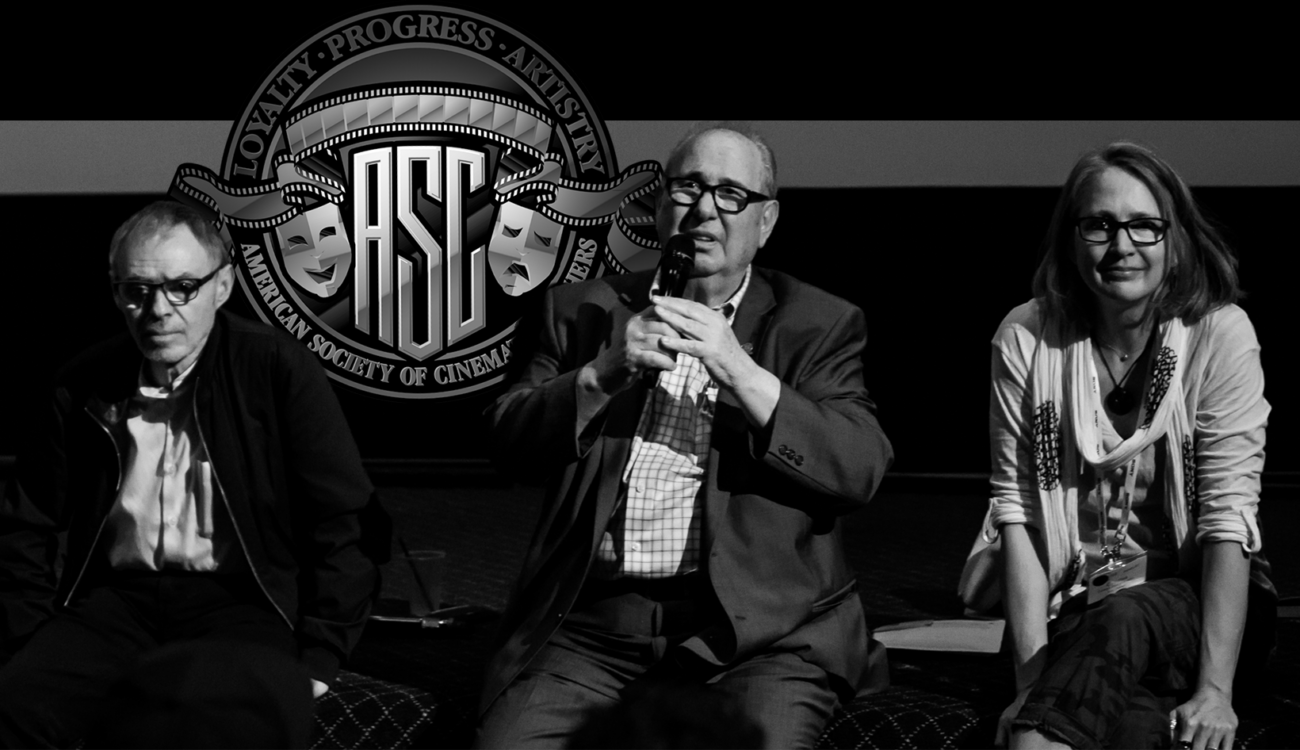 The American Society of Cinematographers was organized with the intention of advancing cinematography through artistry and science, banding together its members in the promotion of their craft. Since its founding in 1919, the ASC Clubhouse has been a place where the best of the best come to inspire one another, divulge what he or she learned on set, and challenge each other to express and innovate. 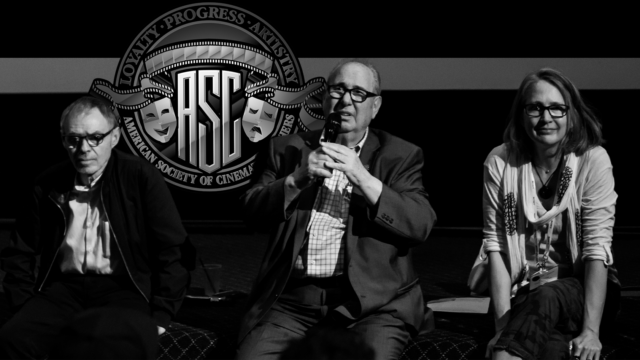 Next year,  the ASC will celebrate 100 years of fostering the camera illuminati. Most every member of the camera department has a whisper within that motivates every adjustment of a barn door–every hour spent pouring over cleaning glass or testing shots. Inside the heart of even the most cynical shutterbug, there is a desire to be among the best. Maybe someday.

As George Dibie moderated a panel full of ASC members, he spoke straight to the dreamer within every op in the house:  “You want to know how you get from where your sitting to where we’re sitting?  We’ll do our best to tell you.”

The panelists were consistent in their beliefs regarding the following aspects of their work:

Here are a few other highlights from that conversation. 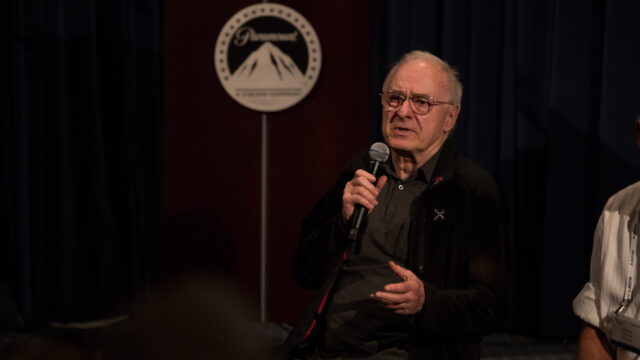 Dante Spinotti:
Work of Note: The Last of the Mohicans, L.A. Confidential, Public Enemies, The Insider, HEAT, Beaches, The Mirror Has Two Faces, X-Men: The Last Stand
On Approach: Talking to the director is fundamental, but it is more important to read the screenplay. Be a servant to the story.
On Tech: Foster the artist over focusing on the tools. “If I have to give a suggestion, it is that technique is nothing.  What matters is the story of your brain, based on your culture.  Technology and technique are just a machine.”
On Staying in Love with Cinema: You can’t get burnt out, so you have to seek out and take on projects that really mean something to you. “It might be you are not in the best shape…your family, your home life…what sustains you is the love of what you do, even in a difficult moment personally, the film still works.”
On Working with a DIT: Find someone you trust and maintain that relationship.  Spinotti has used the same DIT for his last 5 films.

Daniel Pearl:
Work of Note: National Treasure, Pathfinder, Alien vs. Predator: Requiem
On Mastery:  Get past being able to compose and operate. Shoot so much, that your composition is a given.  Then you can dedicate yourself to what really matters: light.
On Being On Location: Embrace local culture, and let it influence you.  Don’t eat the Chili’s. Expand your worldview, and you’ll expand your work. 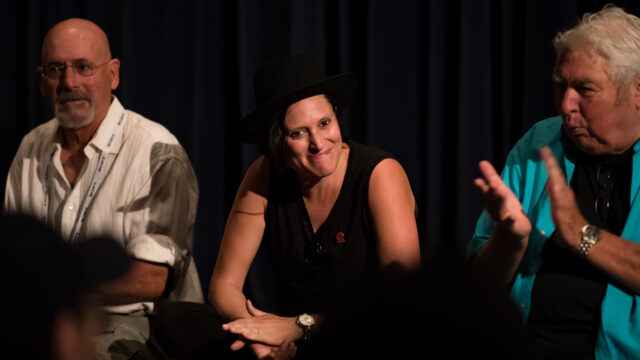 Rachel Morrison:
Work of Note: Fruitvale Station, Mudbound, Black Panther, Cake, Little Accidents
On Mastery: “I would just say, ‘SHOOT.’  You used to have a film crew to make anything reel worthy.  Now you can make a whole movie on your iPhone, so go do it.”  Lean on other DP’s.  Talk to your friends.  Don’t try and learn every piece of new tech or LED out there, but do talk to the Gaffer about it.”
On Working with a DIT: We use LUTS nowadays like we used to use filmstocks.  I usually take a long time to work with a DIT on a LUT and then go with that almost the entire time.
On Style:  “Story trumps all.”  She used the example of Dunkirk in regards to putting the characters and what they’re going through at the forefront. “Weather is one of our greatest challenges as cinematographers.  You look at Dunkirk, and the weather is all over the place, but (the film) is beautiful…Empathy is everything.  It’s about putting yourself in someone else’s shoes and seeing the world the way they see it.”
On Staying Focused: Follow your dreams with specificity. “If you love drama, don’t shoot a bunch of comedies.” Shoot for the reel, and know that it will take years, but you have to aim if you want to make it. 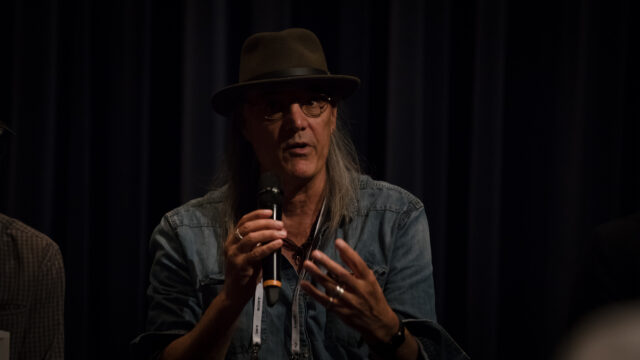 Russell Carpenter:
Work of Note: Titanic, Ant Man, The Negotiator
On Working with a DIT:  My DIT  and my colorist are as important as my gaffer.
I usually try to get the look of the dailies and the LUT as close as possible in case I’m not there at the finishing. The LUT should be in the metadata.
On Process: Carpenter creates a reference book full of research and inspiration during preproduction. He encourages doing as much homework as possible beforehand: “Before even the first day on set, I’ve shot the entire film in my mind.”   When weeks on months of production has him feeling fried, he goes back to that reference book to stay true to his plan and maintain his artistic thread.
On Tech:  “Keeping up with the craft is going to drive us all crazy. I go from the script and what the director says, and THEN I start the technical research.  I surround myself with people who are really good at what they do, and then I tell them what I want.”
On Hiccups: “Learn not to be paralyzed when you make a mistake…Sometimes, half way through a shot, you look at the gaffer and say, ‘Well, this shot’s not going to win us any awards.'” Own it;  make it a teachable moment, and move on.
On Working with the Director: You have to compromise and communicate really clearly.  “Learn to say, ‘I can give you about 90% of what you want, but you need to move this, or cut this action in half, etc.'”

Cynthia Pusheck, ASC Co-Vice President:
Work of Note: Revenge, Good Girls Revolt, Sacred Lies
On Staying Focused: It’s easier to keep up with technology these days, but it’s also more difficult because there’s so much information out there. Research what you need for what you’re working on, but manage your off set time well. “I’m not going to research a new camera if I’m not using it on the next show.”
On Professional Conduct: Stay calm through the “oh shit” moments. Rise to the moment and figure out a plan.  There’s always a solution if you remain flexible.
On Working with a DIT:  Treat a LUT like film stock and don’t spend all of your time in the DIT tent.  Figure out the LUT before you shoot.
On Growing Your Career: Make yourself a fly on the wall, and listen to the conversations between the gaffer and DP.  Really sit down and make a 5 year plan, because the projects take over.
On Working with the Director:  Some directors aren’t great at communicating what they like. Really utilize your prep time to learn what the director likes and pay attention while you’re scouting. 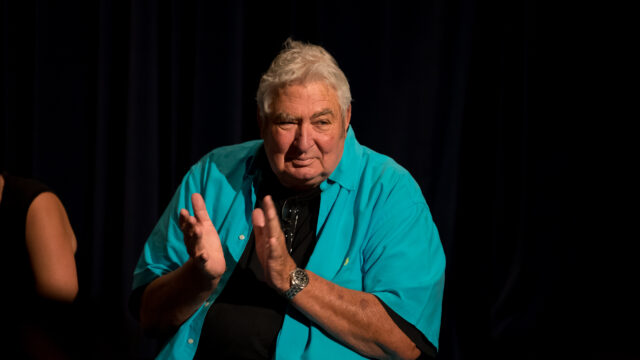 Dean Semler:
Work of Note: Apocalypto, Maleficent, Young Guns, City Slickers, We Were Soldiers, Secretariat, Bruce Almighty, Dances with Wolves
On Staying Focused: “When you’re on a good thing, stick to it.  I’ve only ever used Panavision lenses.  It’s a matter of when you find one you like, stick to it.”
On Developing Skill:  Walk into Mole Richardson, and ask them to teach you everything they can.  The best thing a young cinematographer can do is intern at a lighting company.
On Inspiration: “I get inspired by real life:  the shine off of a bald man’s head, the glint off of a business card.  It might be the way someone walks, someone moves, that inspires me. I like to be in deserts. I’m inspired by deserts.  I’m just inspired by life wherever it is.”
On Working with the Director: Directors come to set with different levels of preparedness.  Some have a fully fleshed out PreVis;  others want to figure it out in the environment.  You have to be flexible enough to work in all these ways.  Interpret what they want and be able to get it into the camera. 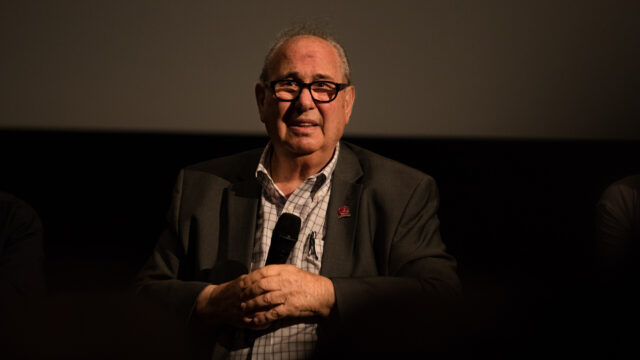 George Spiro Dibie:
Work of Note: Growing Pains, Murphy Brown,  Sister, Sister, The Shari Lewis Show
On Professional Conduct:  Don’t stink on a set; you have 40/50 people around you. Dress well, behave well, and work very, VERY hard.
On Working with a DIT: Learn how to use Resolve. You should know about color science and be able to guide the conversation intelligently.  “With all the new technology, you have SO many chefs in the kitchen.”  Educate yourself, so you can protect your images.
On Working with the Director:  Read about the director; meet for a dinner or two beforehand, so you’re not strangers when you show up on set.
On Growing Your Career:  “It’s all about images and making them with any means available to you. Volunteer. Give your time on the weekend, and the people at the top will give you a job when they have one, if you work hard.  Go to rental houses. If you see someone on the street filming, talk to them.  Ask if you can, help and ask to have the opportunity to learn.”

Bill Bennett
Known for: Myriad National Commercials & being the ASC C0-Vice President
On Professional Conduct: “Never pass up the opportunity to keep your mouth shut. No one will remember what you didn’t say. (Don’t) blurt out something that will embarrass somebody because you will have to eventually rely on that person.”
On Growing Your Career: Save your money.  There are going to be times where you really want to move forward in your career, and you will have to turn down jobs to do it.
On Working with a DIT:  “The director will come into post and fall in love with whatever they’ve all been looking at, and they get used to that. That’s why you have to make the dailies look as close to the final product as possible.”  Be the author of the image, and don’t let anyone take that away from you.
On Inspiration: “I like to travel the world and have experiences outside the borders of this country.” Bennet creates visual reference libraries from his travels.

You don’t have to wait decades to have these conversations after your ASC induction. You can connect to other cinematographers the way you are right now. Engage below. What’s been working for you lately? What really isn’t? Let’s learn from each other.