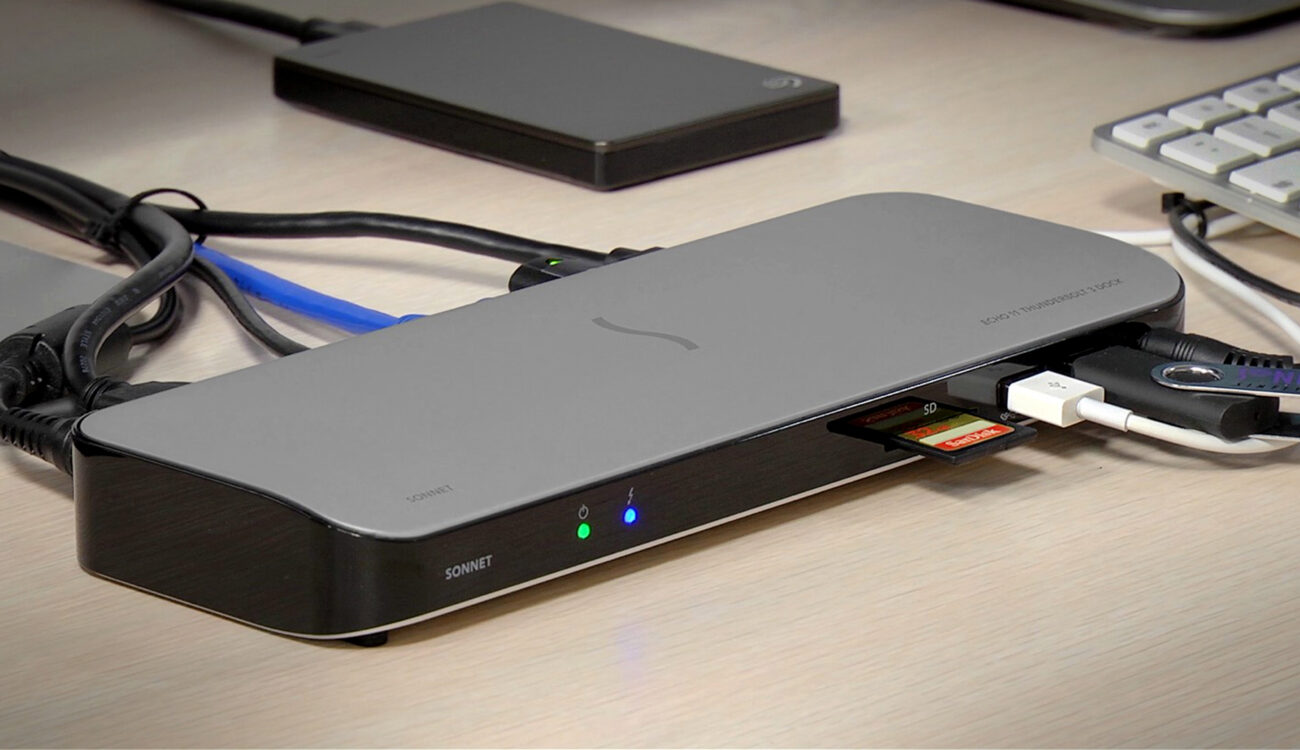 Do you own a recent MacBook Pro? Cool machine but in terms of connectivity? Well, not so cool. If your Laptop happens to be on double duty as a portable device and a workstation you might want to add some sort of hub in order to retain control of all these cables and adapters. The Sonnet Echo 11 Thunderbolt 3 dock is such a device – and a very capable one, indeed. 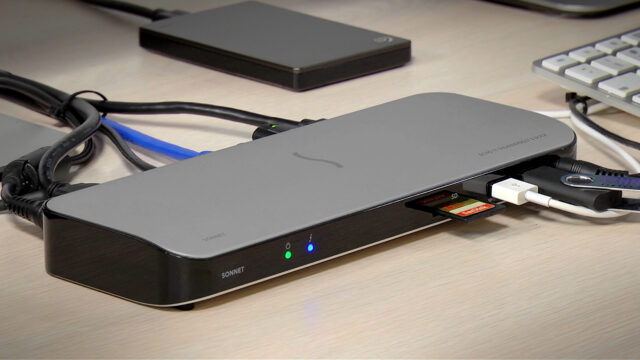 The whole idea behind connecting a dock to your laptop is to get rid of all the cable clutter. All your peripherals including monitors, hard drives and ethernet are connected to that dock. Only a single cable runs to your laptop. For the times you’re out and about just unplug that single cable and off you go. Once you return, plug it in again and you’re all set. That’s exactly how the Sonnet Echo 11 dock is designed. And it sports all kinds of connectors: 4x USB3 ports, 1x USB3 charging port, 2x Thunderbolt 3 port, gigabit ethernet port, HDMI 2.0 port, combo audio jack and an SDHC card slot.

The cool thing is that one of the Thunderbolt3 connectors (which is labeled ‘computer’) provides up to 87W of power. The Echo 11 replaces your laptops power brick, so to say. Of course it needs its own dedicated power supply but you won’t need two of them, at least.  That way you need just that one single Thunderbolt 3 for connecting all kinds of devices to you laptop plus powering it. 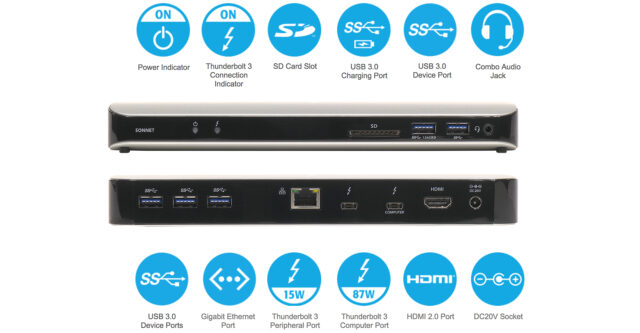 The Echo 11 can handle one 5K display or up to two 4K (3840 x 2160 or less) displays using one of the Thunderbolt 3 ports and the HDMI 2.0 port. There’s no Display Port built into the Echo 11 dock but in the aforementioned scenario the Thunderbolt 3 and HDMI ports take over in that matter. Since this device is only a dock, you have to check if your laptops GPU can handle one 5K display / two 4K displays, of course.

Even if your laptop doesn’t sport Thunderbolt 3 (40GB/s) but Thunderbolt 2 (20GB/s) or 1 (10GB/s), you still can hook up the Echo 11 to these devices using a –you guessed it– adapter. This will limit the performance of the dock, obviously, but it still can be beneficial using one dedicated dock for your desk instead of multiple adapters which you need to hook up every time you come back.

Since there are quite a few different docks available by now, the question is:

Which dock should I choose?

There’s no such thing as the perfect dock I guess. It depends on your needs and your desired work evironment. The Sonnet Echo 11 might be the perfect tool for building a workstation setup at home for use with your existing Thunderbolt3-enabled Laptop. But would you bring it if you’re out and about? Probably not. For that some bus-powered device such as the CalDigit Thunderbolt 3 mini docks are more suitable.

Even if you find the perfect dock for your needs, things will evolve over time. Now readily available connectors will become obsolete especially if we’re talking about Apple laptops. Do you remember FireWire? Well, it’s dead. Since the USB type C connector is being used for both USB and Thunderbolt protocols we’re facing a de-facto standard here. Hopefully it stays that way for just a little longer.

The expected availability for the Sonnet Echo 11 Thunderbolt 3 dock is end of August. Preorders are open and it will sell for $299. That’s not exactly cheap but since Sonnet has a long term reputation of making quality Thunderbolt equipment I’d say it might be worth the premium price tag. Other comparable products include the $299 CalDigit TS3+ dock and the OWC 12 port Thunderbolt 3 dock for $288.

Which dock do you use when it comes to transforming your laptop into a workstation? Share your thoughts in the comments below!