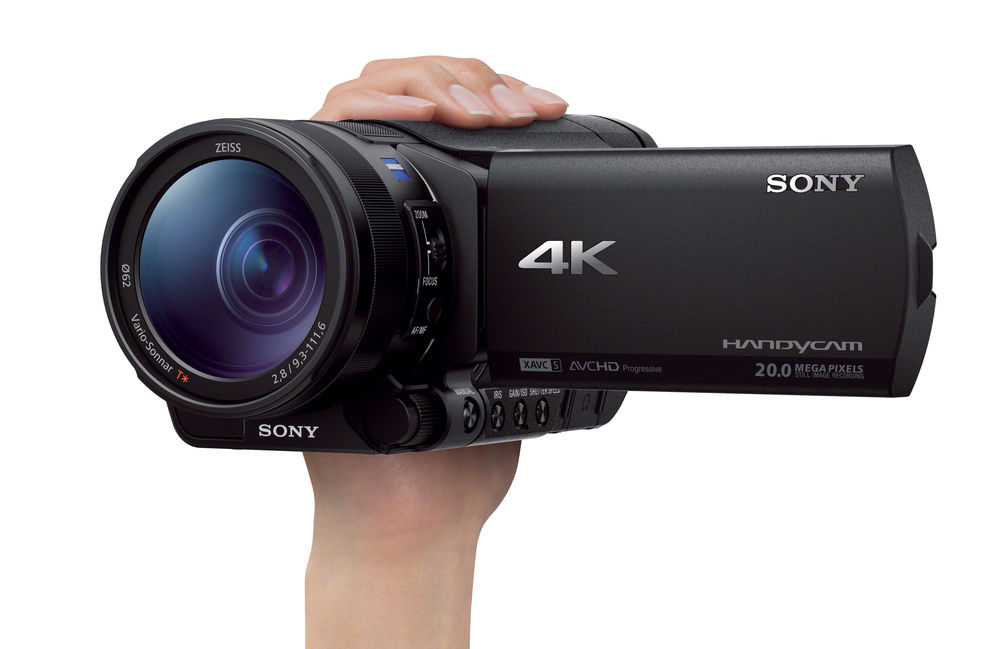 As part of their CES 2014 product announcements, Sony just launched a new 4K camcorder (it’s actually UltraHD at 3840 x 2160 pixels, but it seems that manufacturers have decided that simply “4K” sounds sexier even for UltraHD devices – cinema 4K, delivered by pro cameras, is 4096 x 2160 pixels).

It’s called FDR-AX100 (or FDR-AX100E in Europe … yes, there will be two different models, unfortunately), and according to Sony it’s the world’s smallest and lightest 4K camcorder. Sony was kind enough to give us a personal presentation of a preproduction prototype at our cinema5D headquarters here in Vienna a few weeks ago – and I have to say that the size and weight of the FDR-AX100 is mighty impressive, considering it delivers a quite spectacularly detailed UltraHD image. (More on that further down.)

There’s a caveat – it’s only a 1 inch EXMOR R CMOS sensor which means the footage won’t really look filmic – deep focus like we are used to from traditional camcorders. However, it will be recorded in great 4K detail, and in Sony’s quite impressive XAVC S codec, which was first introduced at NAB 2013 with the FDR-AX1 (post here). Their new BIONZ X image processor enables 4K image processing within the tiny body of the camera (it weighs only 790g or 1.74 pounds). The zoom range of the built-in lens equals 29-348mm in 35mm terms, which is very impressive. Of course this comes at a massive price: the camera loses a lot of light when zooming in, if I recall correctly the prototype goes down all the way to f/6.7 at the far end of the lens (while starting at a very fast f-stop which I can’t recall exactly – and the PR info seems to be lacking about the speed of the lens). It comes with three steps of built-in ND filters, a must-have, so that’s great to see implemented.

The Sony engineer showed us very, very impressive footage which was shot with a prototype of the FDR-AX100. It is true UltraHD with tons of detail and the XAVC S codec performs beautifully. The production camera will also be able to record AVCHD in 1080p.

One very cool feature of the camera is the possibility to connect a TV via HDMI. When you attach it to a 1080p TV set, the image is downscaled to 1080p by the camera, resulting in extremely detailed Full HD images. But the cool feature is the fact that you can show parts of the 4K image and move around the image by tapping onto the touch screen panel of the AX1 in a 1080p “window”. Mighty impressive and great for checking focus – something similar would be nice to have on Sony’s pro 4K offerings, the F5 and F55 as well (yes I know they don’t have touch screens – luckily – but I hope there will be other ways to implement this feature).

In 720p mode, the AX100 will be able to record up to 120 frames per second – mighty impressive. Canon has a lot of catching up to do in the high frame rate department!!

It’s also great to see that the AX100 comes with a very impressive OLED viewfinder which I expect to perform just as well as it does on the A7 and A7R (watch Johnnie’s review here).

Unfortunately the camera doesn’t come with built-in XLR ports, but Sony have confirmed that there will be an optional add-on. However, it doesn’t seem like it will be the same add-on as the one for the A7 and A7R … a real bummer as this accessory isn’t cheap at all. But let’s see if Sony changed their minds after we saw the prototype – let’s hope so! As expected (again, this is based on prototype footage that we were shown, which is subject to enhancements until released), the low-light ability of the camera was lacking, which is down to the high pixel density on such a small sensor. Noticeable grain was introduced into the image once underexposed.

There was no visible grain on properly exposed shots and I think that’s what makes this camera relevant for pro shooters as well – the massive zoom range coupled with a sharp Zeiss lens and the 4K resolution makes it a good B camera for larger sensor 4K cameras, and a go-anywhere-4K camera for documentary purposes.

More importantly, the FDR-AX100 underlines Sony’s focus on 4K even for consumers and semi-professionals and unlike 3D, it doesn’t look like a temporary fad. Like it or not – 4K is here to stay. And the implementation of the XAVC S codec gives me hope that this superior codec will find its way into most of Sony’s future lower end market entries.

We are trying to get our hands on a review unit (pre-production or not) as soon as possible. I am looking forward to testing this one out.