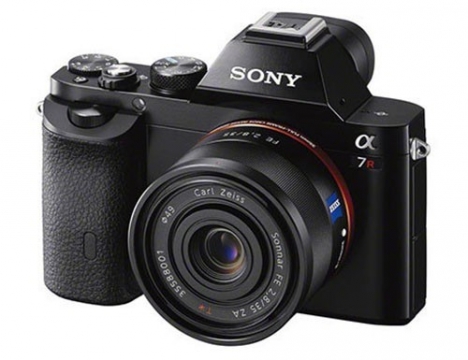 It’s official. While rumors have been making the rounds that Sony would be introducing new mirrorless cameras along the lines of the famous NEX’s, it wasn’t clear we’d see them coming so soon.
Sony just announced two very potent new cameras that go head to head with the Leica concept we liked and also take on some of the bigger DSLRs as well. What’s special about these cameras?
Just like the Canon EOS-M, (the Blackmagic Pocket,) or the Leica M240 they do not have a mirror, making them smaller and lighter professional photo cameras.
Like the Leica they feature a small high quality OLED viewfinder. This one has the same resolution as the Leica’s which was very nice.
And also they have a new full-frame sized sensor which creates beautiful images.
What you wouldn’t expect though is 36 megapixels coming from such a small camera. The A7r has the same resolution as Nikon’s D800 flagship DSLR (if you’re talking photo) and the A7 competes with the 5D mark III at 24MP. But what about a video mode?
Well of course they have a video mode. Which camera/cell phone/other electronic equipment cannot do video nowadays? What sounds really nice at first glance is the following:
• Full 1080/60p with Uncompressed Output
The A7 as well as the A7r seem to come with a video mode that ticks at least some of our boxes. Uncompressed out provides for an optional high quality external recording and 60p slow motion is an often handy feature. We do hope that the engineers have given careful thought as to how useful this mode will be to us filmmakers. The NEX cameras have been popular, but had some issues. The Leica M240 was promising, but video seemed more like a gimmick. Canon’s EOS-M was a great approach at a low price, but could have better quality.
And the Blackmagic Pocket Cinema Camera is a topic of its own providing sometimes nice RAW footage alongside numerous other problems we’d never had.

Here’s more on video from the press release:
Full HD 1080 video capture with 24p/60i/60p frame rates is supported in both AVCHD and MP4 codecs. Uncompressed video can be recorded off-camera via an HDMI connection, and both built-in and external stereo recording is available. HDMI and wireless output allows for viewing of still images on ultra HD 4K television. The 3.0″ tiltable LCD has a 1.23M-dot resolution and WhiteMagic technology for better visibility in bright light. A high-contrast 2.4M OLED electronic viewfinder provides 100% coverage, a wide viewing angle, and features the same 3-lens optical system used in the Sony a99 DSLR.

Also the press release says something about remote controlling video via a USB remote. That could come in handy in some shooting situations.

If the A7 & A7r will hold up to DSLR filmmaker’s expectations remains to be seen. We will surely get our hands on one of these soon and field test them in one of our reviews. Sign up for our newsletter (found on the right) to stay informed.

The cameras will start shipping on November 20th 2013.

Also if you’re interested check out these new lenses they launched alongside for full-frame coverage on the new cameras: