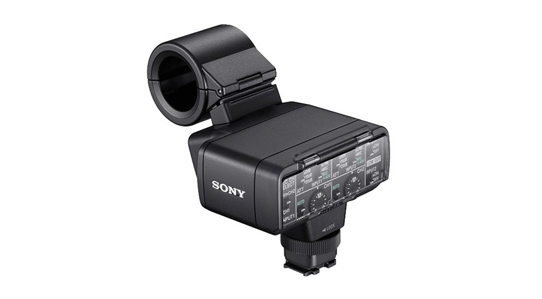 We saw a lot of new products announced at IBC. From cameras, to rigs to monitors, and that was just from the Sony booth. One product which snuck out relatively un-detected was the Sony XLR-K2M audio module, which we first reported in its un-named state here. Now, it is available for shipping. The Sony A7S is such an exciting camera, its one of the few stills cameras that has been properly optimized for video. Audio plays a big part here, next to the Panasonic GH4 and its DMG-YACH interface it’s one of the few stills systems offering XLR audio. It’s done this through the XLR-K1M XLR adaptor, a device that has preceded the A7S as the module is compatible with other Sony cameras.

The problem with the XLR-K1M module is that it tethers to the camera via a hot shoe cable, meaning to mount the XLR adaptor to the camera you needed an additional cold shoe mount.

Sony announced a new model at IBC that alleviates the need for a hot shoe cable, since named the XLR-K2M.

The XLR-K2M connects via the hot shoe connection of the Sony A7S, and provides 2 XLR channels over line, mic and 48v phantom power inputs. It also features independent low cut, and 10db and 20db gain controls per channel.

It’s great that Sony has streamlined this product, making it easier to add XLR inputs to the camera without having to bulk up your setup. However as I mentioned in my initial thoughts of the device, it would have been nice to have the option of both, without having to purchase one or the other. There’s definite advantages of owning the XLR-K1M, it links up very nicely with the Movcam A7S Cage for example, giving you a plethora additional mount points.

Using the XLR-K2M module with cages alike will be a bit tricky due to clearance required of the hot shoe and risk of it clashing with top handles.