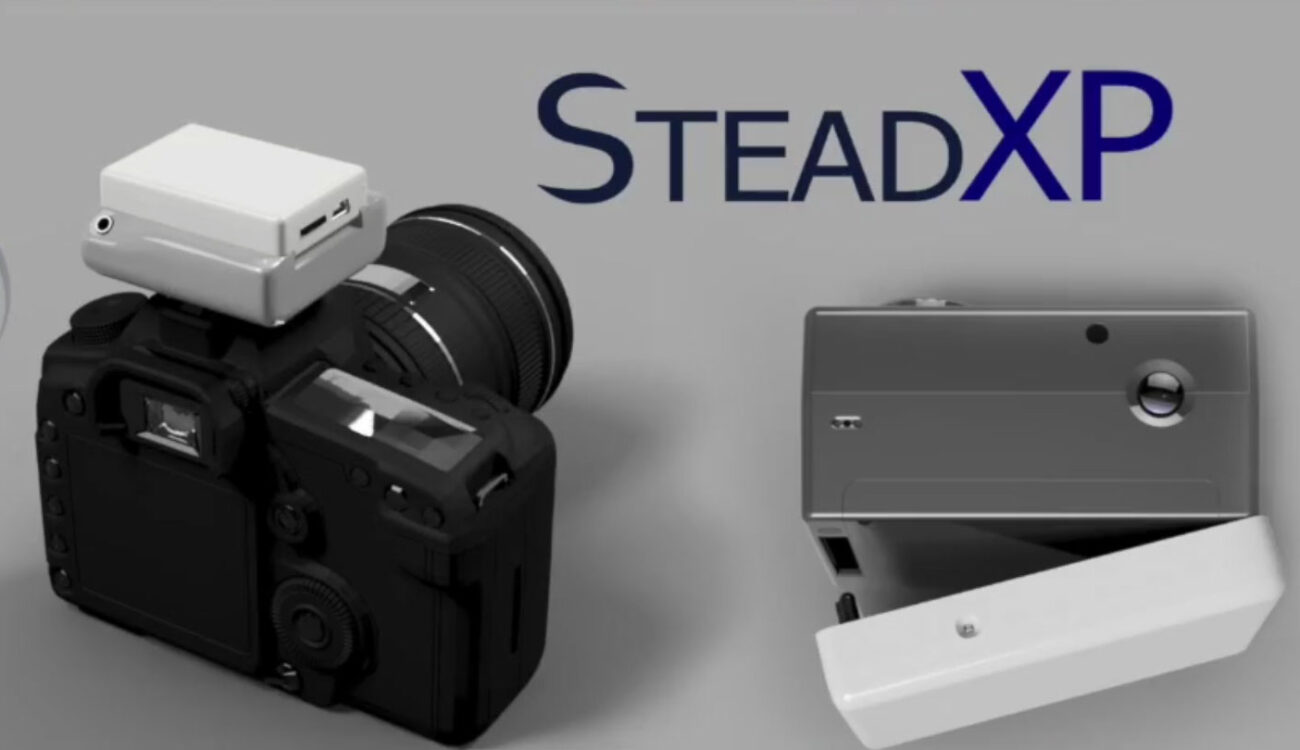 What appears to be the size of a small card reader, the SteadXP device is a square box that can fit on top of your DSLR or on the back of your GoPro. It connects to your camera via the mic inputs and composite outputs, and uses 3-axis stabilization technology to compute and post-process your video, essentially creating the seamless and smooth look you usually get from a steadycam.

Emmanuel in delightful broken English (he’s a sympathique French lad) simplifies the explanation, by stating:
“You just have to plug it into your camera. Inside the box, there is a sensor, there is electronics and when you go back home, you plug the card into your computer and there is a software that merges all the data information from the box – the SteadXP – and the video.”

In the video, at one point we see a shooter running behind a kid who is bolting through a playground. The DSLR shooter jumps over a wooden plank and continues filming, avoiding further obstacles along the way. The shot (shown in a small 3-way splitscreen) is then played back in the smoothness of a steadycam shot. The only other glimpse we get of the DSLR attachment in action is when the shooter exits a skating bowl holding the device between takes, then points the camera back at the skater. What we don’t get from the video is a look at the post-production process behind the technology and just what this process means to the production. How long does the post-processing take? Will there be a preview rendering of sorts that can help the shooter make adjustments on set?

Timelapsing, Walklapsing, Hyperlapsing has now been made popular by such smartphone apps like Hyperlapse and others. It’s obvious that the novelty of time-lapsing hasn’t quite worn off with new stabilizing technologies like SteadXP emerging and many possibilities unfolding. You may recall the innovative Berlin Hyperlapse video back in 2012 from Shabab Behzumi, who was among the first to use a combination of LR-Timelapse, Adobe Lightroom, manual tracking via After Effects to post process and morph sizes, open shutter shots and zooms into synthetic-timelpased-dolly-zooms. We are now seeing a plethora of these videos as the technology is being perfected and improving rapidly.

And yet, having used stabilizing devices like the Glidecam 4000 or the MōVI M10 on commercial projects, the news of a simple device that can be plugged into any camera to achieve the same smooth look raises a lot of questions. One of the joys of using a stabilizing rig on set is that you can shoot and review footage quick and easily.

Since the video doesn’t provide much information about the postproduction process, the idea of setting up a DIT station to compute for ‘real-time’ playback sounds cumbersome. The pro of not having to balance your glidecam before shots, lug around large contraptions that require a lot of calibrating in advance and relying solely on your shooter to remain steady and trip-free on the other hand, sound equally compelling.

One application I can see SteadXP enhancing greatly is aerial shots. Will that mean no more gimbal rigs on your copter?

SteadXP is currently seeking crowd funding and it could take a while before this new device hits the market. Emmanuel hopes to post more news soon and until then, we will just have to wait and see.