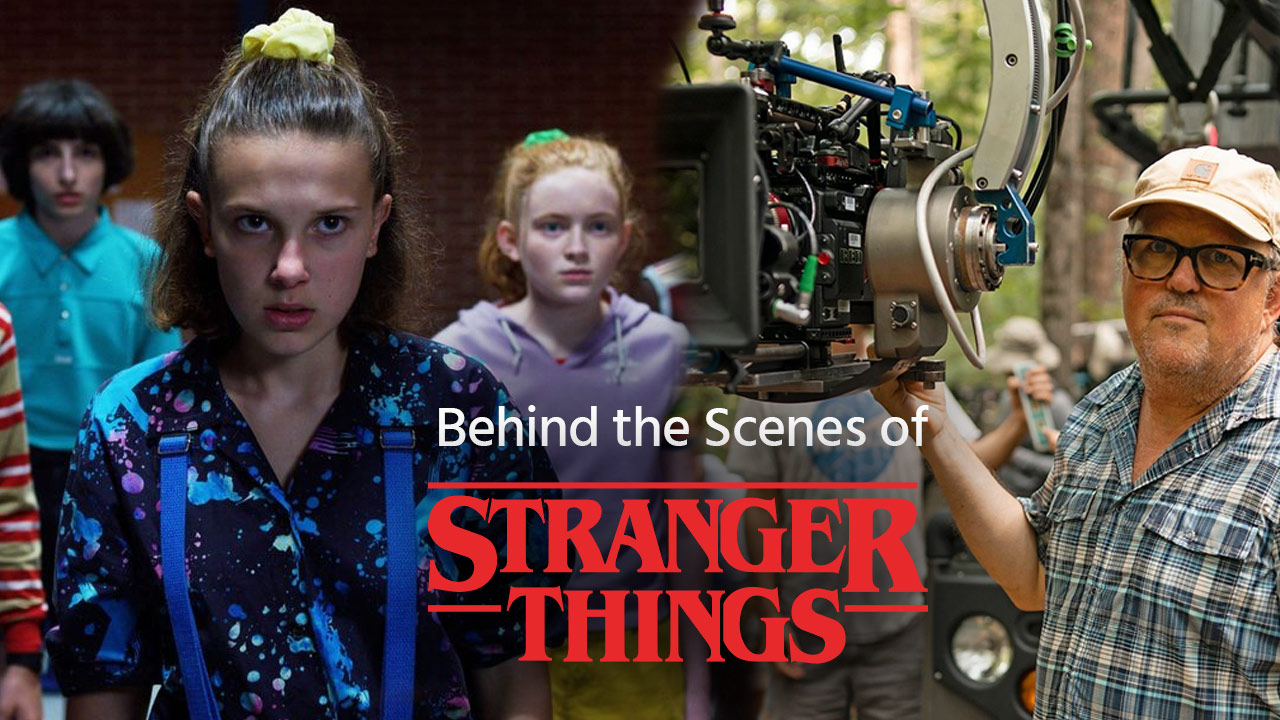 American Cinematographer released an exciting interview with DP Tim Ives, ASC, to talk about his job on Stranger Things. Ives has been the DP on the Netflix show for all three seasons. Let’s talk about camera movement, lighting, camera choices, and how they can help you tell a story that is an homage to the ’70s/’80s pop-culture!

Stranger Things is a Netflix Sci-Fi/Horror series created by the Duffer Brothers that started in 2016. The story takes place in a fake town – Hawkins, Indiana – in the 1980s. The heroes are a group of kids that are trying to find another young boy that mysteriously disappeared. A lot of paranormal events will happen, and they will meet other people with supernatural power.

It’s pretty hard to resume a three seasons long show without spoiling you, and if you’ve never seen it, Stranger Things is a mesmerizing series. The Duffer Brothers set the series in the 80s as an homage to the pop culture. In conjunction with Tim Ives, the DP since day one, they went for an aesthetic that is reminiscent of Steven Spielberg’s films, Stephen King’s universe, or the original Ghostbuster movie. If you want to learn more about all the references and homages in Stranger Things, there is another incredible interview of the Duffel Brothers here. 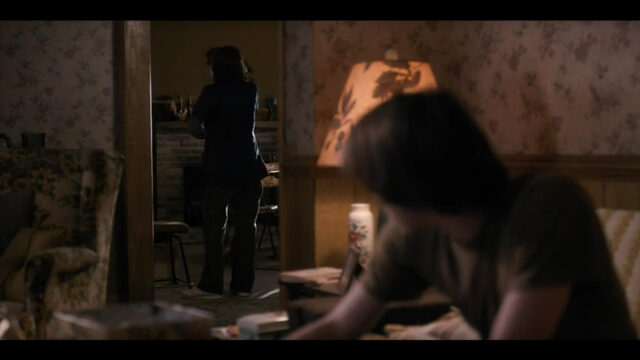 Stranger Things – Pre-Production and the Look

In this interview, it is interesting to hear Tim Ives talk about how the story led to several choices in the set design, color, and tones of the series. For example, the tones and colors in season one of Stranger Things are pretty muted, without a lot of saturation, to reflect 1982’s mood. As the story progress, they started to introduce more and more colors and saturation in season two/three to reflect the ambiance of 1985.

Also, Ives describes his relationship in pre-production with the Duffer Brothers as being crucial. The DP and the directors spend a lot of time talking about visual references and the ambiance that they want to achieve, which is, of course, driven by the story. 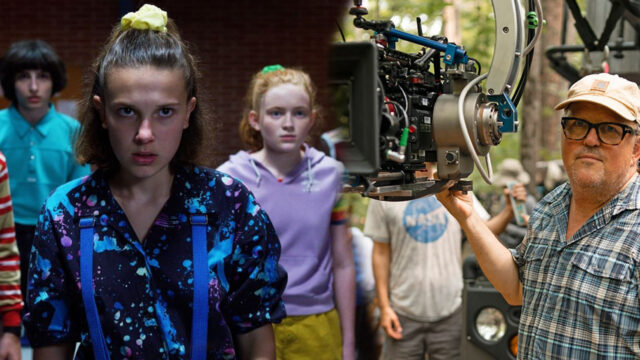 When you have to shoot that many scenes and sequences per day on a series with a reasonable budget – 6 million USD per episode on season one – like Stranger Things, you have to move fast. Indeed, Tim Ives made extensive use of the Technocrane SuperTechno 50 through the entire show. If you are not familiar with what a Technocrane looks like, here it is. No, a SuperTechno 50 won’t fit in your trunk. Image credit: Technocrane

A Technocrane is a giant telescopic jib that can extend during the shot at a speed of 2m/sec. You can look at it at a Moza Slypod under steroids that retail for $500.000. Ives used the Technocrane “2 to 3 times per week,” and it saved them some time to get multiple shots without having to set up a dolly with rails. 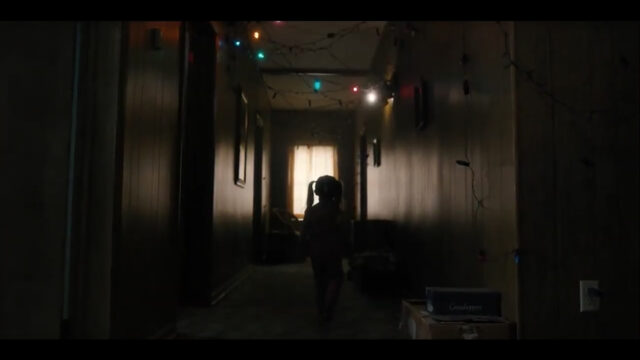 Another thing that Tim Ives made critical use of is practical lighting. Indeed, he describes practical lighting as part of the “bible of Stranger Things.” On shots where they were not supposed to flicker any lights, Ives and his team had the habit of putting fixtures onto dimmers. What’s more interesting is how he describes the influence of Stranger Things’ fans on this “flickering light” look. 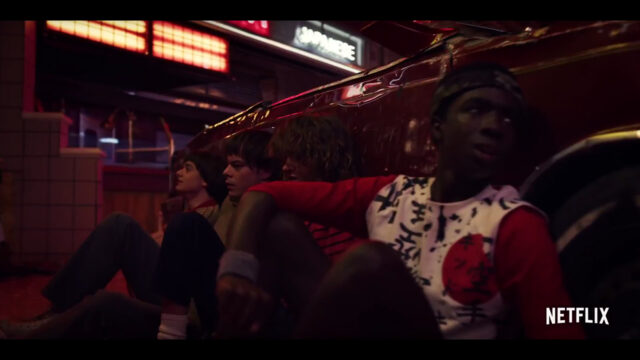 In season three of Stranger Things, the Starcourt Mall sequence is impressive because tons of lights are flickering at the same time. It took John Hilton, Stranger Things’ gaffer, and his team one month and a half to wire everything so the lights could flicker. In an interview for AC Mag, here is how he describes it:

The crew spent a Saturday night in the mall with a camera testing different ballasts, Variac dimmers as well as some LED neon-style light ribbon. Milne (Stranger Things’ second DP) desperately wanted to just use the existing fixtures but nothing was going to replicate them in the same way that the cinematographer wanted. In the end, after testing about six of the neons through a different ballast for eight hours without failure, Milne risked it and got the company who designed them to change over all the ballasts in the mall to new ones. It was a big gamble for the cinematographer, but in the end all the flickering you see in the season finale is ‘in camera’ and it really pays off. 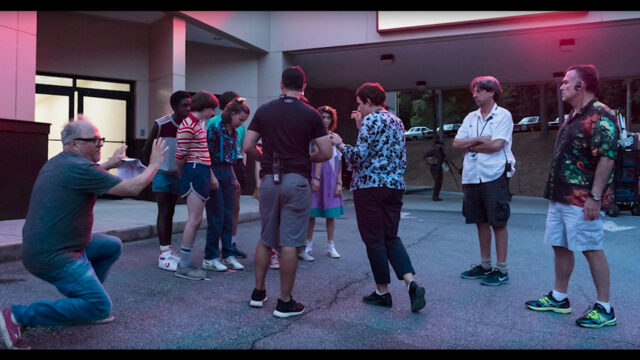 But, they decided to shake things up a little bit for season three, and they went with the RED Monstro VV, which features a Full-Frame sensor. They are working with only one LUT on Stranger Things, and they had to re-create a specific LUT for the Monstro VV. Going the Full-Frame route, they were able to get shallower depth of field, which result in more “cinematic shots,” according to Ives. 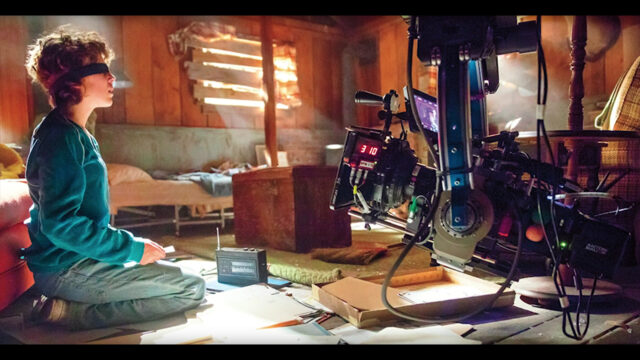 Also, the Leica Summilux-C lenses don’t cover Full-Frame sensors, so they went with Leitz Thalia lenses and a couple of Sigma lenses for the wide shots. The most significant change, other than the Full-Frame “look” and feel, is that the Thalia lenses are T/2.6-2.8 compared to the T/1.4 of the Summilux-C. In an interview for Leica, here is how Ives describes these lenses:

When we put the Leitz Thalia lenses on the camera I saw the best parts of what I saw with the Summilux-C lenses, but on a more epic scale. With new sensors shooting clean at higher ISOs the stop doesn’t matter as much for lighting. Even at 800 ISO we’re at a T4.0 and it’s never a problem. I haven’t struggled to light into the subjects. In fact, I’m embracing my darker instincts.