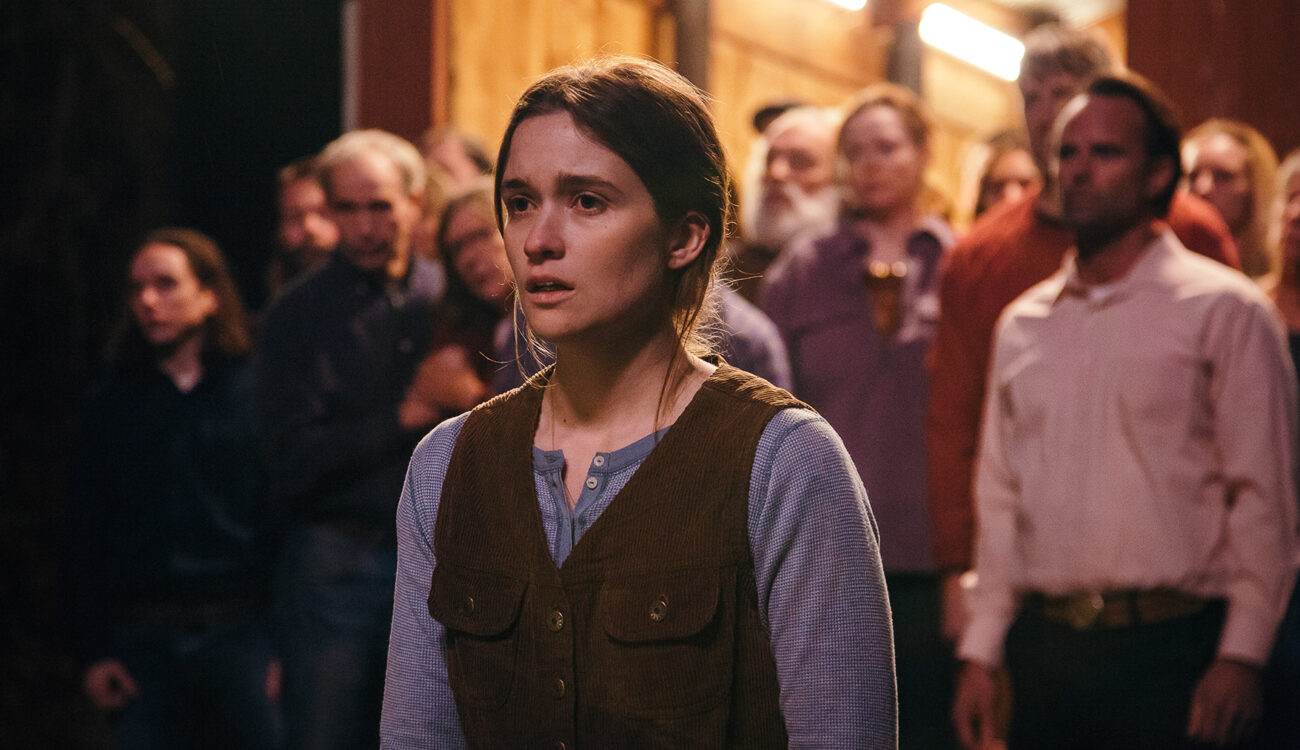 Being a moviegoer in the Eccles Auditorium is a singular delight for the senses. With 1400 seats in the space, a small gasp of realization from the audience is magnified into a profound shared experience.  (It’s the kind of feeling you just cannot get Netflix and chilling on your couch.) For filmmakers who have been to Sundance,  this is the big dream:  the dream past the dream of making it into the Sundance Film Festival. On January 27th, Them That Follow premiered in the Eccles Auditorium, and after the credits scrolled, the audience leapt to their feet in a standing ovation.  The dream past the dream past the dream.  Learn what went into crafting the images of an Eccles ovation-maker from its director of photography, Brett Jutkiewicz. 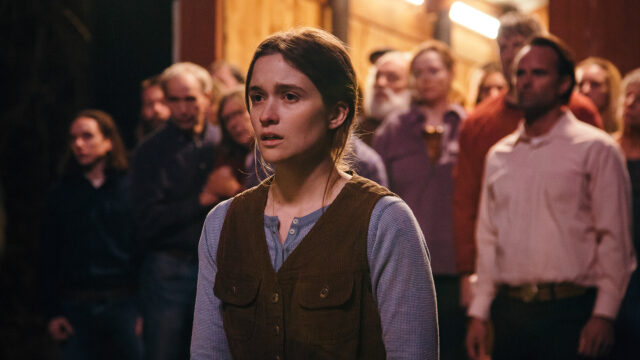 I really just try to understand the underlying emotion of each scene and find ways to translate that visually to add more depth to how an audience experiences the film. It’s important to me that I’m not just telling the story but that I’m creating a feeling, whether it’s through lighting or composition or camera movement or any other tool that I have. I’m also a big proponent of exhaustive prep and research and shot-listing and planning every detail, in large part because the preparedness frees me to keep my eyes open for the unexpected – what the light is doing, how an actor moves, some interesting detail in the location. I like to create a framework for the visual language but I’m not big on rules for the camerawork. I think finding something exciting and unplanned and being able to embrace it is one of my favorite things about the job.

cinema5D: How do you run your camera department?

BJ: In the camera department, I try to create an environment that is as inclusive and collaborative as possible. What I love about filmmaking is that a group of people with different perspectives come together to create something that is much more than the sum of it’s parts, and I think that’s true about cinematography as well.  My work lives and dies by the efforts of my crew, and I was very fortunate to have an incredibly talented camera team on this film.

cinema5D:  The Alexa Mini is the dominant camera amongst this year’s narrative work at Sundance.  Why was it your choice?

BJ: The film is set in a rural Appalachian community that feels a bit like time moved on without it, so I wanted to create a look that didn’t feel too modern or crisp, and the Alexa’s image has a very organic feel that was perfect. I also find the digital noise on the Alexa has a very filmic quality to it, and I didn’t want the image to be too clean, so I rated the camera at 1280 ISO to add a little more texture than the base 800 ISO, which also gave me a bit more stop to work with. We did a lot of handheld work, so the Mini was useful to keep the weight of the rig down. Being out in the woods in rural Ohio, we definitely depended on the Alexa’s ruggedness and reliability.

BJ: We used the primes 95% of the time. I just love the look of these lenses, they are softer than modern glass which helped take the edge off the digital image, but they still have good contrast with a beautiful focus fall-off and a lot of character in how they flare and react to light sources in the frame which helped me create a textural, slightly ethereal look. 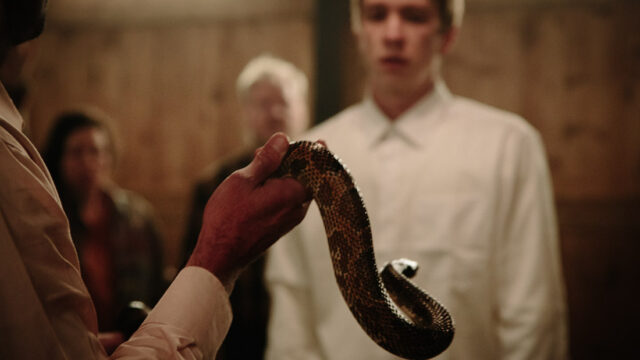 Thomas Mann and Walton Goggins appear in Them That Followby Britt Poulton and Daniel Savage, an official selection of the U.S. Dramatic Competition at the 2019 Sundance Film Festival. Courtesy of Sundance Institute | photo by Julius Chiu

cinema5D: Did you do any camera tests before principle photography?

BJ: As is typical for a low budget indie, we didn’t have a lot of time for camera testing. I committed to the format and lenses just based on previous experience and once the package showed up in Ohio (a couple days before we started shooting), I was able to pull together some basic tests to set the look. My colorist Nat Jencks sent me some LUTs he created based on our discussions, and I ran through all of them with our test footage and chose one that I used for the whole show. I prefer to define the look in prep rather than use a standard 709 or K1S1 and create the look in post. That way what everyone is seeing on the monitors and in dailies and editorial is close to how I want the film to look when it’s graded.

cinema5D:  How did you work with the directors to get on the same page for the look?   Did you watch any movies together?

BJ: A few of the films Britt, Dan, and I liked as references were Wuthering Heights shot by Robbie Ryan (BSC, ISC), Mud shot by Adam Stone, and Mustang shot by David Chizallet and Ersin Gok. We also looked at photographs by Stacy Kranitz, who documented Appalachian communities and serpent handling congregations.

cinema5D:  Were there storyboards and/or shotlists beforehand?

BJ: We didn’t storyboard, but we did extensive shotlisting. I find a lot of value in shotlisting. It allows me to discuss every scene with the director in a very detailed way and really opens up practical and creative conversations that are incredibly informative.

cinema5D:  How was working with a directing duo?

BJ: Our process during production was very organic. We would consult our shotlist but very often just be responding to how the actors played the scene and how the blocking worked in the spaces. Britt and Dan came to this project with a specific vision and deep sense of the world they were trying to create, but were also very open to collaborating on how we would translate that visually. It was an incredible experience working with them to bring the film to life, and I feel very lucky to be a part of it. 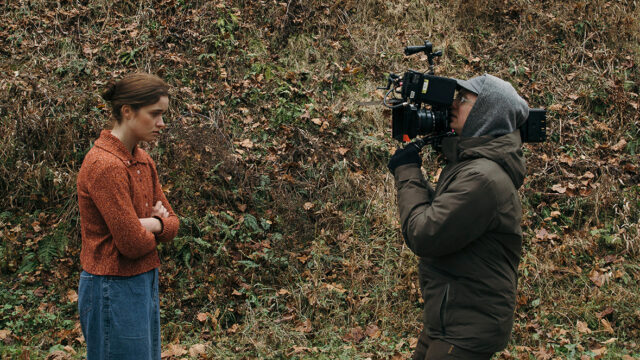 DP Brett Juttkiewicz on the set of Them That Follow

BJ: Just the standard ND filter set and a polarizer, the panchros already had the quality and character that I was looking for.

cinema5D: There are so many different looks and locations in this film for an indie.  Can you tell us a little about your approach to the lighting?

BJ: We used a lot of Quasar Science LED tubes, which aren’t brand new technology, but as far as lightweight LED lighting goes, I think their color rendition is excellent. We used them in all sorts of ways: we taped up 2-footers inside interior locations, where low ceilings made it important to have as small a footprint as possible. We made 4-foot by 24-tube arrays that we used in a condor for night exteriors, or to push light in windows for day interiors, and even shot a night driving scene with a single magnetic tube stuck to the hood of the picture truck. They were also very important in our church location, where we used the T8 tubes in practical on-camera fluorescent fixtures that were wired to a dimmer board where gaffer Lyon Taylor could watch a monitor and live dim them during our long roaming steadicam shots to keep our actors backlit and avoid camera shadow.