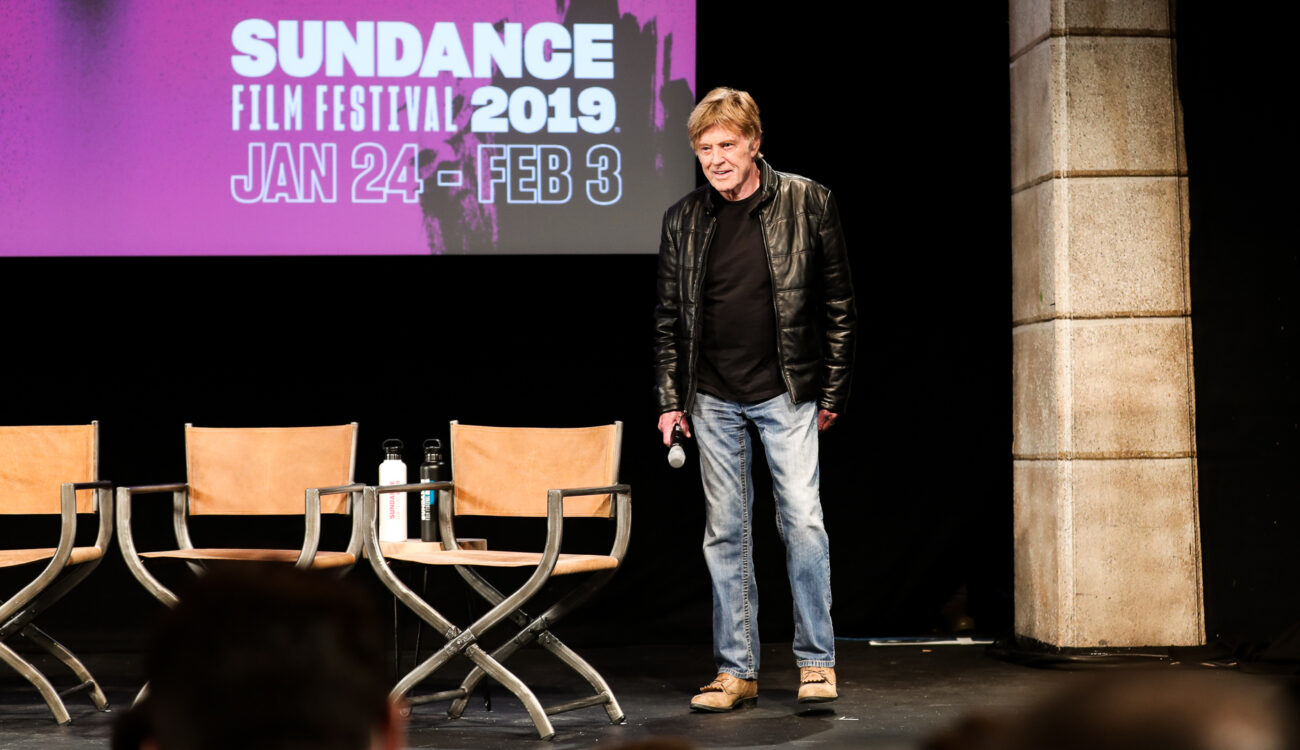 January 24th, 2019.  Park City, Utah. The lights dimmed in the Egyptian Theatre as the festival intro that will  precede every film over the next 10 days flickered onto the screen for the first time at the 2019 Sundance Film Festival.  For 34 years, the festival has kicked off with a press conference featuring Sundance Institute President & Founder, Robert Redford, a man who changed the filmmaking landscape for the better and the long haul. 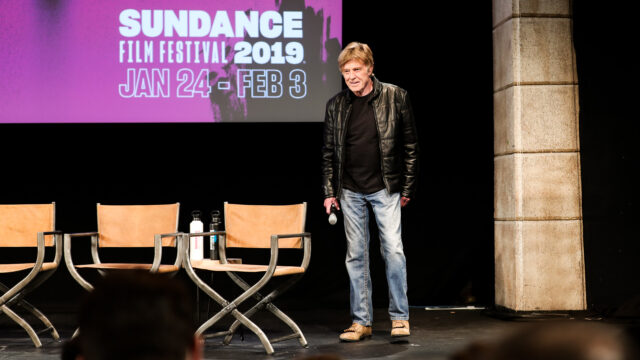 Met with applause and deep appreciation, Mr. Redford took the stage to welcome the press.  For someone so private, he holds the room with an easiness that radiates outward. Robert Redford’s passion for the arts and social consciousness are the foundation of the Sundance Institute.  His nurturing of creative artists and his ability to recognize those who could help him expand that support has materialized into what is arguably the most pivotal platform, on which an independent filmmaker can grow and thrive.  As the applause faded, Redford thanked the press and solicited gratitude for the volunteers.  It seemed kickoff-as-usual until Redford did not take his seat, stating he would be pulling back from introducing the films and programs in 2019 and spending more time doing what he loves: supportating the filmmakers. He then introduced the Executive Director of the Sundance Institute, Keri Putnam, who gave this year’s opening remarks. 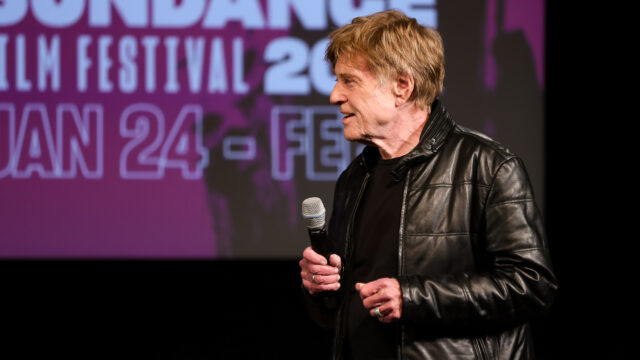 Ms. Putnam reinforced that the festival is non-profit, and that every year its success subsidizes the Institute’s support of independent artists worldwide through its grants, labs, and other programs.  She offered that the aim of the festival each year is to be a “public square,” in which artists of myriad perspectives share their work, and therefore, their ideas.  “Art can’t spark conversation, if it’s playing it safe,” said Putnam, which is right in line with this year’s festival theme:  RISK INDEPENDENCE. “The final risk of independence is the one the audience takes…that pushes us out of our comfort zone.” 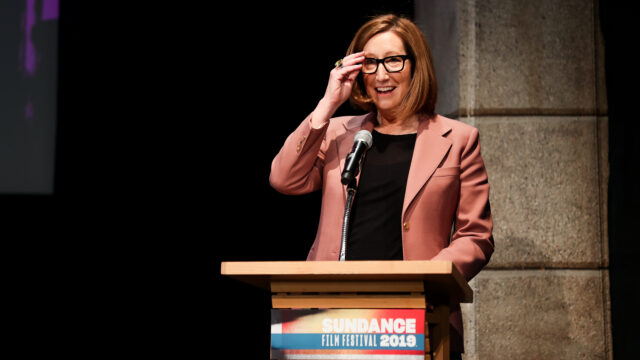 In a time where audiences are bombarded with entertainment that is “commerce, not purpose driven,” Sundance seeks out work with “depth and risk” that is “not data driven, but human-centered.” When Sundance says human, they mean every human.  This year, they are publishing the demographic data of who is submitting to Sundance to see where there are holes in the backgrounds represented amongst their filmmakers and where they need to reach out next. The Institute also ensured that the critics who would be reviewing those works came from a wider range of backgrounds.  Over half of the press working at Sundance this year are from underrepresented  communities.  This is a huge leap forward in that often a film’s acquisition/distribution is dependent upon good reviews after its premiere here.  It is definitely not enough to diversify the films in competition, when all of the critics are straight white men. When it comes to inclusion, Sundance fires on all cylinders, bettering themselves every year.

A number of international directors, who have films in competition this year, struggled to obtain visas to come to the festival.  According to Putnam, the Sundance Institute worked with several pro-bono lawyers to get them here.  Devastatingly, two filmmakers from Muslim Ban countries are not in attendance. Putnam gave a nod to the documentarians around the world who risk their lives and their liberties to share stories that require great bravery to capture, especially in a time when the freedom of the press is being threatened around the world. Executive Director Putnam then gave the floor to Festival Director John Cooper, who was accompanied by 4 of the festival’s senior programmers and new Director of Programming:  Kim Yutani.

These are the gatekeepers of Sundance, and they gave their time to tell us how they choose what they choose, so lean in. 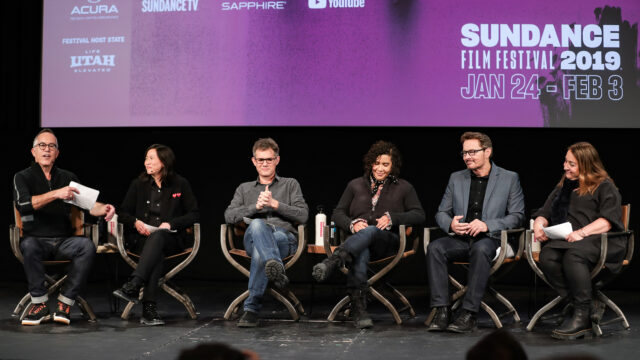 On a macro level, it’s what one would expect.  Cooper explained, “We look for authenticity; we look for creativity; we look for originality…but every year we do this, we’re looking in a new world…Through artists, we see what’s important to us as people.”  According to Mr. Cooper, all of the programmers contribute to the selections in all of the categories. They argue frequently, which is indicative of the programmers’ different points of view being represented and the dedication they share to give a platform to as many kinds of artists as possible. To that point, Kim Yutani added, “We want to show work that is challenging, that is creating conversation.” Senior Programmer John Nein stressed the festival’s need to make it known that this is more than an American festival for American filmmakers. “The idea of independence is global,” said Nein, “Certain films (are) right for Sundance, and Sundance is right for certain films.”  John Cooper emphasized their need as programmers to continue the goal that Robert Redford set out when he created the festival, equally exhibiting documentary and narrative filmmaking.

David Courier (senior programmer) spoke to a “renaissance” in the documentary space, applauding the 4 independently produced documentary films, which made over 10 million dollars in 2018.  Contrary to popular belief, they do not intentionally theme their documentary selection.  However, due to the way politics and current events provoke filmmakers to capture their worlds’ reactions, certain topics and themes do arise.  In this year’s festival, several documentaries revolve around the importance of free speech and the freedom of the press.  Even the off-screen programming will draw from the political as Ava DuVernay will head a panel in the Filmmaker’s Lodge to discuss whether art can change democracy. 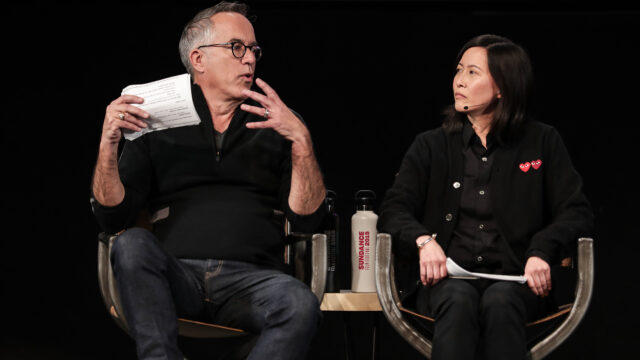 Whether political or fantastical, familiar or foreign–it is no secret that Sundance has long sought out fresh voices.   17 of this years documentary competitors were made by first time filmmakers.  No matter what the subject matter, the programmers agree the most winning of an entry’s characteristics is truth, which most often is born out of bravely showcased specificity.

“The specificity of a story is what really resonates with people.“ -Kim Yutani.

The storytellers in the the New Frontier category are so specific, their audiences’ biochemistries are altered.  New to the festival this year is New Frontier Central, a permanent venue dedicated to experiencing films in the Virtual Reality.  The Institute converted an old Blockbuster for the space.  (So in a way a days-of-video graveyard is fertilizing New Wave cinema.) Chief Curator of New Frontier, Shari Frilot explained  the need for a new space arose as the stories they are showcasing now require wider movement from the participant and more thorough incorporation of the human body.  In immersive art forms with VR and AR, one’s body is a part of the emotional response to the art and the artist.  Both Cooper and Frilot agree this physical connection to the content deepens your experience.

In addition to New Frontier Central, those attending this year’s festival will have the opportunity to experience Talent Forums, the live music events, numerous panels at the Cinema Cafe, keynote speeches with filmmakers like Ryan Kugler, and of course, watch movies until they are physically incapable of blinking.

For more information about the Sundance Institute and to even watch this press conference, check out their website, and be sure to follow our spotlights on cinematographers, editors, directors, and more over the next few weeks. You can read our first spotlight with DP Ashley Connor here.