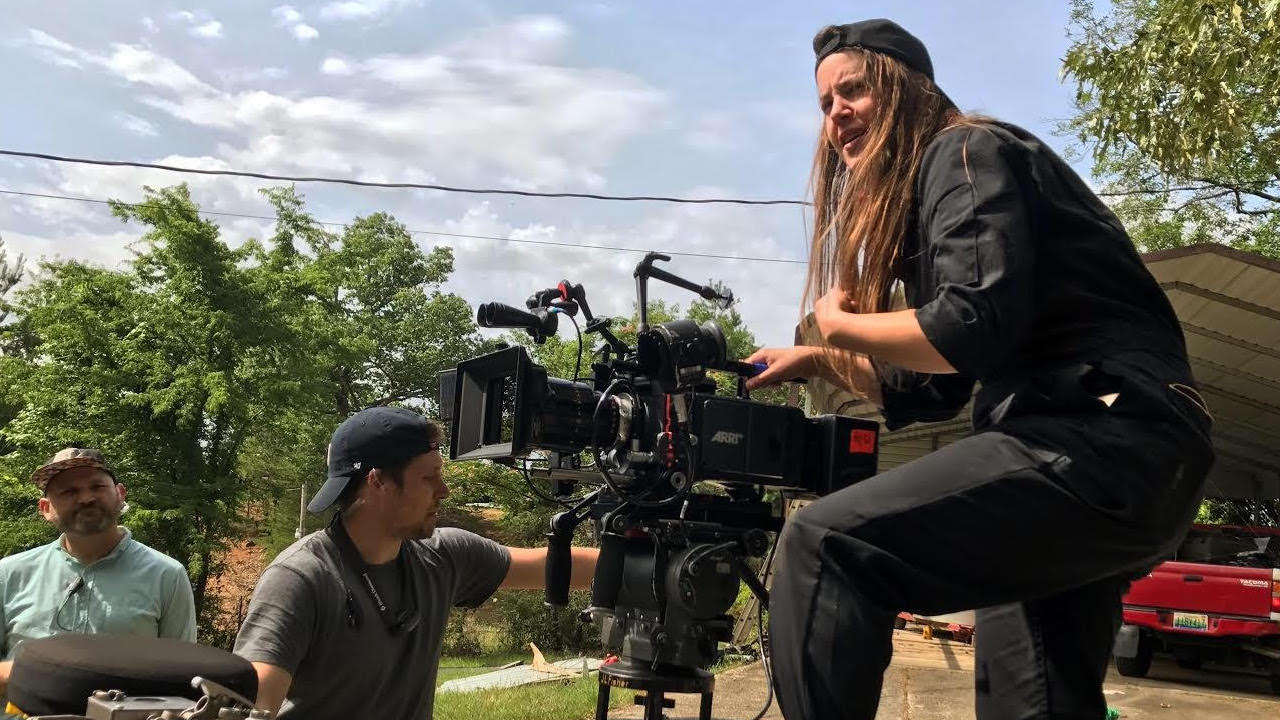 The new year means a whole new film festival circuit, and it all starts with Sundance.  Filmmakers come by the hundreds and thousands to huddle around tens and dozens of space heaters on the frosty streets Park City, Utah.  We’re braving the chill for the love of cinema and to deliver the goods on how this year’s entries were made. Here’s a look at Ashley Connor’s work as the DP of The Death of Dick Long. 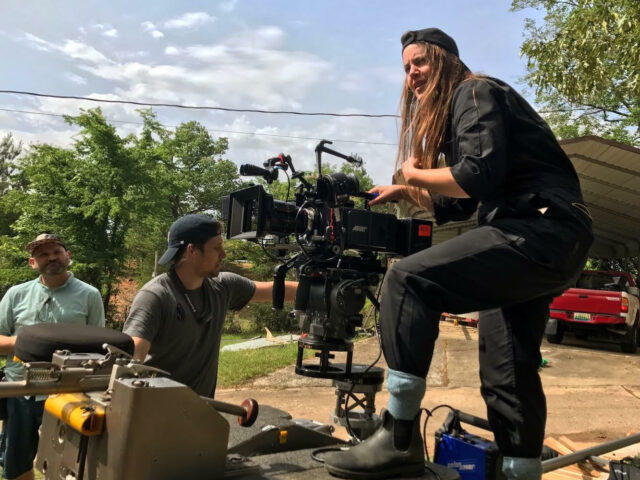 Ashley Connor on the set of The Death of Dick Long.

DP Philosophy:
Always be open, always be growing…and in terms of how to run a camera department, I just try to encourage my crew to be caring people.  Film sets can create toxic environments, and no one can thrive without feeling safe and empowered.

cinema5D:  Did you and director Daniel Scheinert watch any films together before embarking on this project?

AC:  In prep, we watched To Live and Die in LA and some Coen Brothers movies… basically films that deal with action that you wouldn’t necessarily call action films.

cinema5D:  Tell us about pre-production for The Death of Dick Long.

AC: We prepped down in Alabama during a hot summer. Our camera tests were designed so that we could build a LUT with my colorist Nat Jencks to see how far we could push the contrast, because we knew we’d be dealing with direct sun a lot.

cinema5D:  Did you use one LUT for the entire shoot?

AC:  I had a two person camera team so my loader was more of a 2nd AC. Basically, Nat helped create two LUTs, one for daytime and one for nighttime work. Because the LUT was so heavy, it was too difficult on our budget to carry it over for the night shots. The process of creating the look wasn’t too difficult because by the time Daniel and I brought in Nat, we had defined the look we were trying to achieve. The palette was a lot of deep greens and reds and blues – the production designer (Ali Rubinfeld) really incorporated those tones into all the spaces. 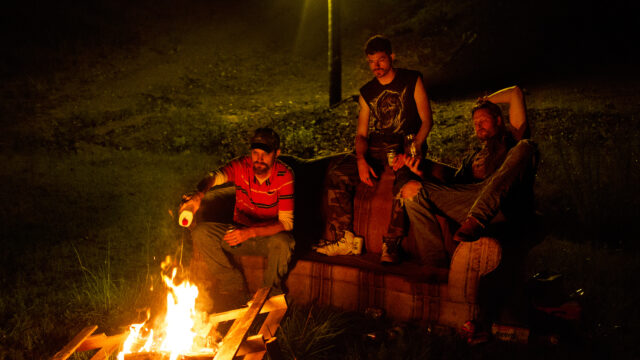 Andre Hyland and Michael Abbott Jr. appear in The Death of Dick Long by Daniel Scheinert. Courtesy of Sundance Institute.

cinema5d: How did the two of you work together during production?

AC:  Daniel is such a pleasant person on set, and he’s really not afraid to explore multiple styles in any given scene. I tend to get stuck in my head over the meaning of shots or the emotional subtext of a scene, and he really pushed me to go out of my comfort zone and freed me up to have some fun.

cinema5d: Optics wise, last year you were showing films that utilized the Cooke Panchros and the K35s from Canon.  What guides your decision when choosing lenses?

AC: In terms of lenses, I usually survey a director to define terms they might use to describe how they envision their film. Dreamy/soft wasn’t on that list (for Daniel). It was more concrete than that, more immediate. I had shot with the primos on a few music videos for the artist Maggie Rogers and I was really impressed with how they performed in different types of light:  like a great portrait lens.  When I test lenses, I don’t use charts. It’s a mood thing – a feeeeeeeling. 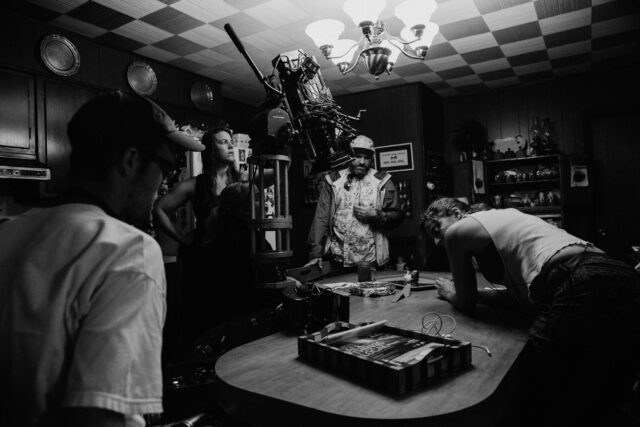 Behind the scenes of The Death of Dick Long. Photo credit: Wes Frazer

cinema5d: Did you lean on any focal lengths over others?

AC:  We used a lot of wide-angle close-ups, nothing too extreme, but we needed the audience to be able to physically feel close to the characters. The movie, in my opinion, is a lot about intimacy and loneliness, so we wanted to carry that over in the cinematography.

cinema5d: It  seems like DPs who use the Primos rarely go back to lensing with anything else.  How about you?

I’m not beholden to any piece of gear or company – free agent, baby! But really, I love Panavision, they’ve always treated me super well.  I think DPs who exclusively use one company’s cameras or lenses are missing the power of exploring new visual landscapes.

cinema5d:  What was your lighting strategy for The Death of Dick Long?

AC: My gaffer, Danny April, and I thought a lot about color and how we would subtly shift the palette as the film progresses. Our main shooting location was a house, specifically the kitchen in the house. We wanted every scene in that room to feel unique:  like you were slowly sinking into the depths of one man’s personal hell. As the main character Zeke gets more trapped by his lies, we kept adding more red. Collaborating with the production designer, Ali Rubinfeld, we spray painted a lot of the kitchen fixtures of have red glass. My key grip, Danny Green, also built ND frames for the windows to help make them progressively darker but still being able to shoot during the day. The film feels very thick, we kept it saturated and colorful, which felt like its own love letter to summer in Alabama. We wanted you to feel the sweat. 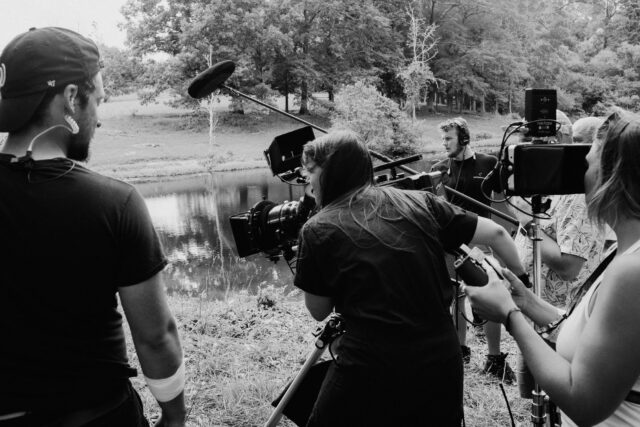 Behind the scenes of The Death of Dick Long. Photo credit: Wes Frazer

cinema5d:  You’ve already been fairly prolific.  Do you have any advice to DP hopefuls about how to keep working?

AC: I try to encourage young DPs to make work that feels like an honest expression of themselves. I was really lucky and came up shooting really low/no budget movies. I bled; I cried; I missed A LOT of weddings. I lost friends.  It’s not an easy path, but it’s truly the only thing I can imagine doing, and that’s what separates a lot of people. It is so much sacrifice that your heart needs to really be in it. Also, I encourage them to not get stuck being paid for a job you don’t want to be doing. It makes working on low budget projects that much more difficult.

cinema5d:  What’s your take on where we’re headed in cinematography?

I always try to bake in my look, and I’ve also always celebrated in camera effects. I prefer them to post effects, and it’s cool to see more people embracing that aesthetic. But! I am fearful that robots will eventually replace cinematographers, so fingers crossed we don’t head in that direction. 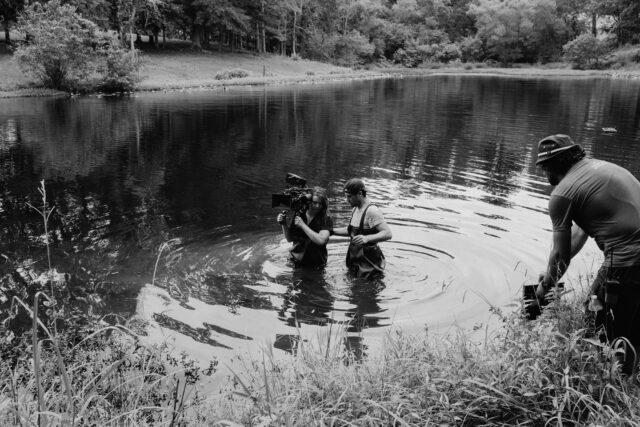 Ashley Connor is a New York based director of photography.  In 2018,  two features for which she was the cinematographer were in competition at Sundance: The Miseducation of Cameron Post (dir. Desiree Akhaven) and Madeline’s Madeline (dir. Josephine Decker).  You can read our interview with her from last year here. Her work on Josephine Decker’s Butter on the Latch and Thou Wast Mild and Lovely, which both premiered at the 2014 Berlin Film Festival, prompted New Yorker film critic Richard Brody to name her, alongside Darius Khonji and Fabrice Aragno, as one of the year’s best cinematographers.