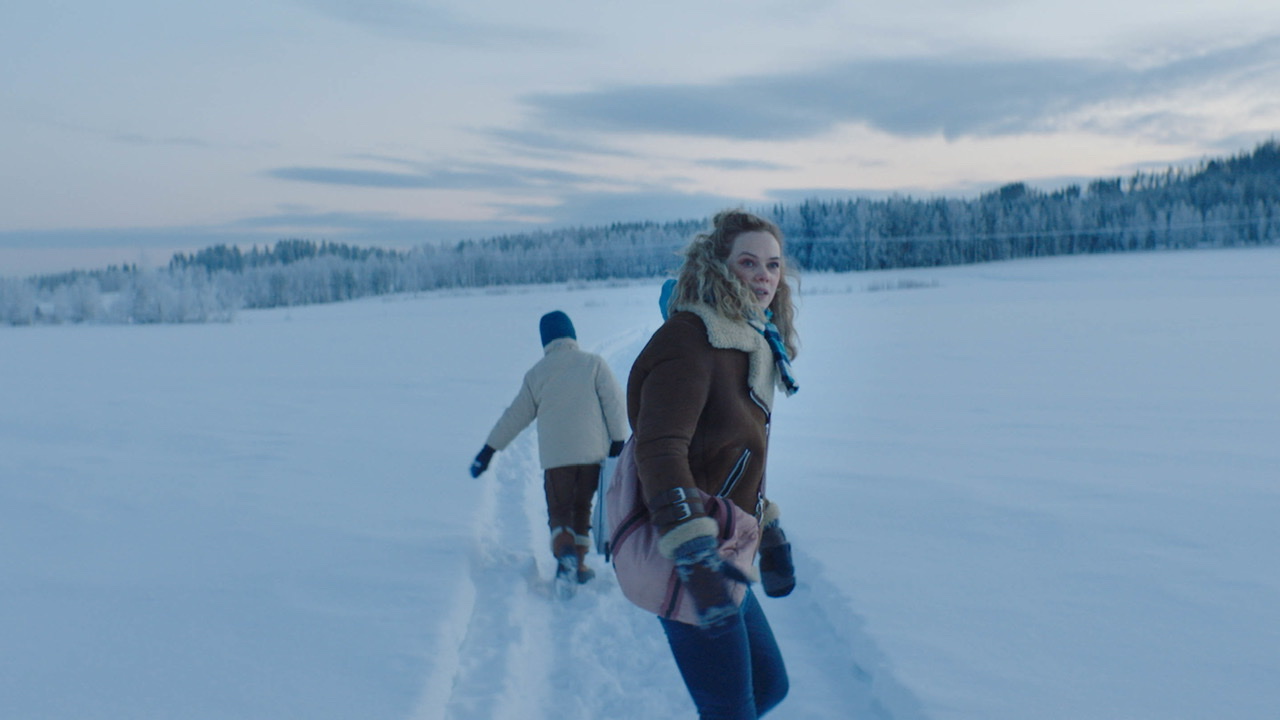 Charter is a masterfully made film from Swedish director/DP duo Amanda Kernell and Sophia Olsson.  This film has the grip of a chase movie, the psychological tension of great suspense, the urgency of a fugitive film…and yet still manages the heart of a great family drama.  This movie puts the audience inside a mother’s spontaneous abduction of her children during a terrible custody battle. Read on to learn more about the film’s cinematographer Sophia Olsson and how she achieved its bold look in some truly challenging circumstances.

cinema5D: How did you find your love of cinema?

SO: I’ve had the passion for film since I was a teenager, especially when I found the smaller art house cinemas in Stockholm, Sweden, where I grew up. These cinemas screened films from many different countries in the world,  and that was a completely new experience for me—watching films I hadn’t had the chance to see before. This was way before internet. No streaming and nor Imdb existed. Imagine! Later on, I studied film science for a year, and there I got to see films on the big screen almost every day. So many of those still remain as my inspiration.

cinema5D:  Any in particular that you’d like to mention?

SO: Hard to say…there have been so many, and they are always changing, but one of the early films that has stayed (an inspiration) for example, is the film Happy Together by Wong Kar-Wai and DoP Christopher Doyle. It really got to me in so many ways. The beginning of that film is very smart and strongly told—the way you get to know the characters and story in a captivating and truthful way…just in the first 10 minutes!

Another one is L’année Dernière à Marienbad from Alain Resnais and DoP Sacha Vierny. The absurdity of scenes and the playfulness of how it’s being told is always inspiring to watch. Again and again.

cinema5D: So then how did that love of global cinema translate into  a career in cinematography?

SO: I started with still photography and then moved over to film. When I started with film, I was doing everything, and then I got into Valand Film at Gothenburg University, formerly Högskolan för Fotografi och Film. I studied directing for three years.

I never felt completely comfortable with directing, but I really tried to for those years. After I had finished my studies there, I shot a short film, and that was totally different. I got the feeling of being in the right place—that I just belonged, and I felt calm. It was so obvious.

After that, I ́focused on cinematography. I then went to another film school, The National Film School of Denmark, and I had the same feeling there—finally, at the spot where I needed to be. (I spent) four great years there, and then I was out working.

cinema5D: You’ve collaborated with director Amanda Kernell before on Sami Blood— a film, I have to tell you, has stuck with me since Sundance 2016! Were you excited to work together again?

SO: When Amanda wanted us to continue working together for Charter, I wanted to of course! Amanda is great in so many ways. Her scripts have a drive and no scene is left to chance. Her characters are complex and very different. At the same time, there is room for reflection and precise detail. Her directing and choice of actors are very well thought out. Yet, at the same time, she’s very intuitive on set.

cinema5D: What about Charter in particular attracted you to the project?

SO: The number one reason was  director/writer Amanda Kernell. I guess that’s it. Then, we got the great production designer Sabine Hviid on the project as well, and the three of us had a strong and intense collaboration that I hope we will have many times more. We were insisting on finding the best locations, which took time, and finally we did. But we found or built locations that really served the story, and that enhanced the relationship within the family and all the emotions and phases they go through. 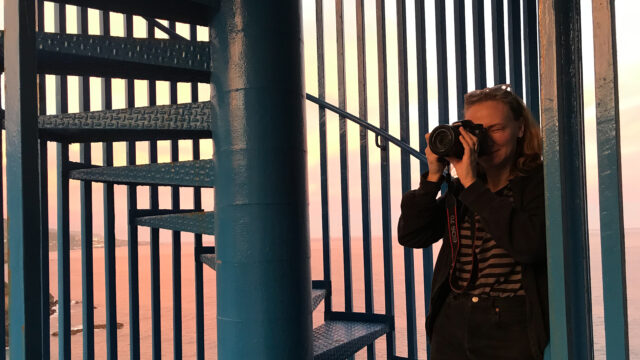 Sophia Olsson on a location scout in Tenerife, Spain in the  Canary Islands.

cinema5D: You and Amanda  seem to have the ideal Director/DP relationship.  Do you have advice for others on how to reach that kind of collaboration?

SO: I would say it goes both ways. Listen to each other’s ideas. Be patient. Try to have the time to talk through the script and be open. Nothing has to be final right away. If you know early on that you will work together, I would say to invite the cinematographer before the script is finished to have her/his view on the story. That can be very helpful in the making of the film.

cinema5D: Before the script even! Wow. What else did you and Amanda do in pre-pro to prep the look?

SO: Amanda and I go through the scenes thoroughly to find the focus of each scene, what we want to achieve and how we think the transitions should be between the scenes. When we have the locations, we go there and walk it through to see if it ́s working. We write shotlists but very seldom storyboards. Floorplans though, are very (beneficial) for the crew and for ourselves to remember the scenery and shots we’ve planned out. We had a close collaboration as well with production designer Sabine Hviid about colors, style, fabrics, reflections and so on—especially when it comes to the difference between the cold wintery North of Sweden and the warmth in Tenerife.

cinema5D: What made you go with the Mini and the Anamorphics?  Why that combo?

SO: We really liked the texture of the Cooke Anamorphic for what we wanted to achieve. The family in the film is in a nightmare situation, and we therefore wanted the film to have a touch of something surreal, but just a touch. After tests, the Cooke Anamorphic were the ones that fit that expression the most. The softness and ability to have information in the blacks without becoming bland…they keep the dark side dark, but still not too contrasty or crushed blacks. The Cooke Anamorphic doesn’t have that strong of an anamorphic effect, but at the same time, you can sense there is something strange. It still breaks up the colors and ”straightness” of the feeling of reality, which we wanted to achieve.

cinema5D: Is there any strategy during principle photography that you and Amanda employ that you find to be consistently successful?

SO: Amanda has a lot of rehearsals with the actors before filming, and that is very helpful for us.  We can see if our thoughts are working or not. Sometimes we have planned our shots before the rehearsals and sometimes the other way around.

cinema5D: What about your interaction with the camera department and G&E?

SO: I really like a collaboration where you can be open and honest. That helps the creativity grow further. The collaboration with my gaffer Per Olsson is great. He gets ideas  from our talks about the feeling of the scene for how to solve the lights, not only technically, but creatively.  I trust him fully.  In general with my crew, (I make sure they know) we’re in this together and (ensure) we ́re kind to one another.

cinema5D:  There are so many scenes in the water for this movie…Most people who have worked on an indie crew know what that means  for the workload on those shoot days.  Did you guys have some underwater housing?  Did you shoot from a boat? How did all of that go down?

The underwater housing we had was pretty big and heavy. It was fine to operate when I was underwater, but as soon as I was above (the surface), it was very ungainly and difficult to operate. But we made it work with some homemade solutions.

The scene at the end at night, out on the sea—we used a boat, and it was very difficult. I would do it differently, if I had to do it again, because it got complicated, and we had to work very fast—which is difficult in water. It was very cold  for Ane Dahl Torp, the lead actress.  We had to stress the shoot because of the danger for her health. She is such a champion.

cinema5D: There is such a strong color story in this film.  Is involvement in post something you negotiate into your contract?

SO: It is. I was at the grading with Amanda and colorist Dylan Richard Hopkin. We had 10 or 11 days, and Dylan did a fantastic job.

This film is a deep exploration of complicated choices, which puts the viewer inside the protagonist’s dilemma. If you happen to be in Switzerland, Charter will drop in cinemas on March 13, 2020.  The rest of the world will have to wait for news of international distribution.  Fingers crossed. Until that fine day, you can take in Sophia’s work on Amanda Kernell’s first feature Sami Blood on Amazon Prime.