Tentacle Sync unveils pocket-sized audio recorder called Track E with synchronization over Bluetooth and 32 bit floating point technology. It records audio on SD cards and can be either synced with another Track E (or Sync E) device, or it can function as a standalone recorder.

Tentacle Sync is a German-based company designing and producing timecode generators. Their products have become very popular among many camera operators and sound grips. They offer reliable timecode syncing in a very compact form factor. We did a quick review of their Sync E timecode generators back in 2014.

It seems the creators at Tentacle didn’t leave the drawing boards as they are showing new product at this year’s IBC in Amsterdam. It is called Track E and it’s Tentacle’s first audio recorder with synchronization. What is it capable of?

This new audio recorder is nearly as small as the popular timecode generator Sync E, so it can easily fit in the pocket for recording on the go. It can function for example as a recorder for a clip-on microphone eliminating the need for a radio-link. It offers synchronization over Bluetooth based on the well established Tentacle Sync technology. 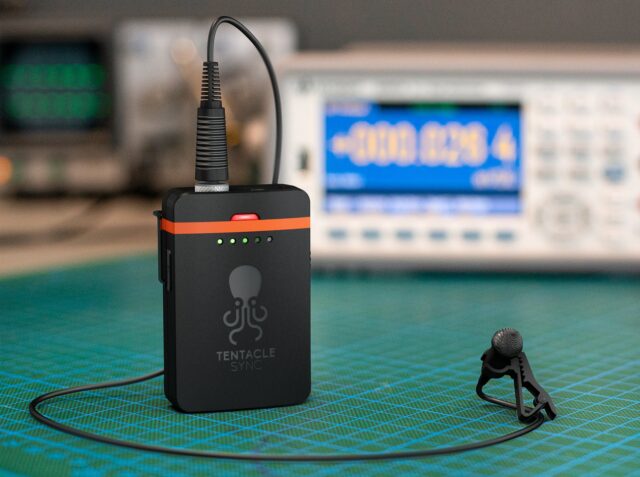 After an initial syncing process the devices run independently with less drift than one frame within 24 hours. This means that the Track E will work in environments where regular wireless transmitter fail. It is controllable through an app for iOS or Android and it seamlessly integrates with other Sync E and Track E devices.

The Track E audio recorder does not necessarily need a Sync E device to operate – it can easily function as a stand-alone device. As soon as the device is turned on, it will be recognized by the Tentacle Sync app and can be configured wirelessly. The Track E uses 32 bit floating point technology for recording the audio with a significantly enhanced dynamic range.

This means that the gain of the recorded audio doesn’t matter. Audio that was recorded too quiet, can be raised in volume to the desired level without raising the noise floor. 32 bit floating point also means that no digital clipping will occur. This technology makes the Track E a versatile set-&-forget-device that will always deliver high quality audio. 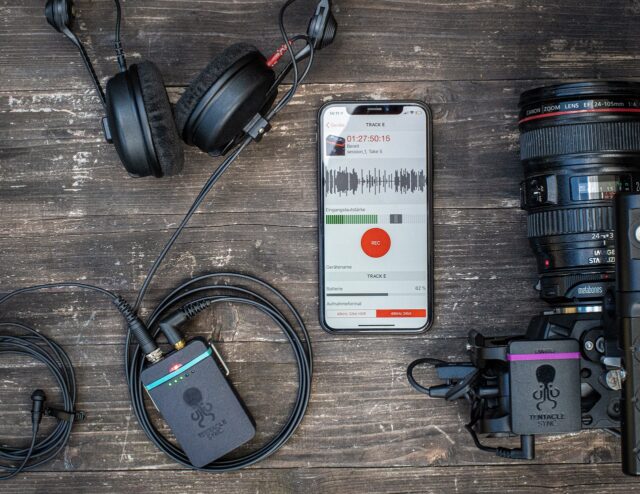 Tentacle Sync Track E records the audio on SD cards. An input limiter and a high-pass filter are included too. The mini-jack connector has a screw to offer maximum security for connected microphones. The Track E features adjustable plugin power for supporting a wide range of microphones. It also offers headphone jack for direct audio monitoring.

Tentacle Sync Track E audio recorder will be available in Q1 2020. A free license of Tentacle Sync Studio is included with every Track E purchase. In addition to the regular Track E, there is going to be a bundled version with a cost-effective lavalier microphone as well. The exact retail price has not been announced yet.

What do you think of the new Track E audio recorder? Do you use Tentacle Sync timecode generators for your work? How do you like them? Let us know in the comments underneath the article.