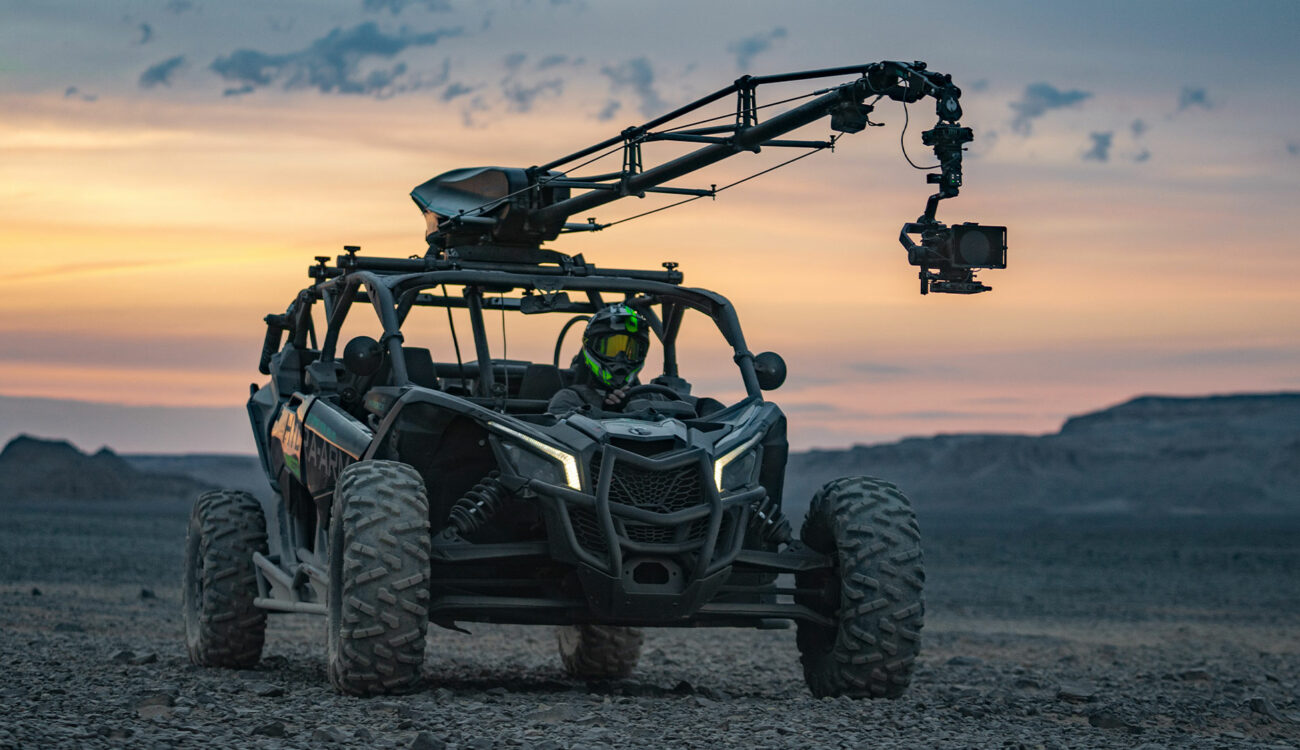 The Tilta Hydra Arm Mini is a compact and lightweight (when compared to similar products) camera car arm/crane that can carry payloads of up to 22 lbs (10kg). It can provide power to the gimbal/camera package from the included V-mount or Gold-mount battery plate. The arm requires 220V power and can be controlled by the included wired controller. The arm is available now for $9,999.

With the new Hydra Arm Mini, Tilta is aiming to provide a lightweight and easy-to-assemble camera car arm. First introduced in June 2022, it took a few months to finalize. Back in late 2022, my colleague Graham was at the Irwindale Speedway motorsport facility in California where Tilta was testing and showcasing the Hydra Arm Mini for the first time. Unfortunately, we could not include footage from the arm itself in our video from the speedway. Tilta was saving all the footage and additional information for today, because the Hydra Arm Mini has just become officially available. Let’s take a look at the details.

Tilta Hydra Arm Mini is a portable, lightweight, counterweight-free system for filming vehicles and other moving objects – a car camera arm/crane. The arm has been designed specifically for the DJI RS 3 Pro, but it can work with many other gimbals as long as the whole setup fits in the payload tolerance – the maximum is 22 lbs (9.98 kg). The gimbal can be mounted via 1/4″-20 threads and powered via Gold/V-Mount batteries from the included battery plate mounted on the end of the arm.

The arm itself weighs 155 lbs (70.3 kg) (without the gimbal-camera package) so the vehicle roof must be able to carry the weight. There are optional suction cup kits for vehicles with sunroofs including panoramic sunroofs and an optional electronic kit that allows users to monitor the suction cup pressure remotely for added safety. The arm length is 152″ (387cm), max height is 177″ (450cm).

One advantage is that the Hydra Arm Mini can be disassembled and stored in three relatively compact cases that can be checked in with airplanes to fly to the filming location (where you might not have such an arm available for rent).

According to Tilta, the system can support speeds of up to 74 mph (120 km/h) in ideal conditions. They, however, recommend keeping speeds at or below 37 mph (60km/h) – especially when using heavier cameras or lighter (=weaker) gimbals.

The Arm helps stabilize the gimbal when operating on uneven surfaces and can be adjusted for various payloads. The shock-absorbing head of the arm can be individually adjusted for both the horizontal and vertical axis.

The arm itself does not have any power or video passthrough features meaning you will need to use a wireless video transmitter (not included) and power the camera and all accessories via on-board batteries or the Gold/V-Mount battery plate found on the arm.

To power the arm itself, you will need a 220V 1000wH+ power source which is NOT included in the package. It is also possible to use a large 110V power bank with a 220V converter.

The included controller connects to the arm via a wired connection for reliable communication. It gives the operator access to various options for the tilt and pan axis, including speed, dampening, and range of motion limitations for each axis individually.

Pro Mode is an expanded control option that allows users to control the Hydra Arm Mini and an RS2/RS3 Pro gimbal simultaneously through the controller.

Tilta previously announced that the price for the Hydra Arm Mini will be $9,999. It is available for pre-order right now. Do not forget that you also need to purchase or rent a suitable 220V power source for the arm, a gimbal, and a camera package with a wireless video transmitter to have a ready-to-shoot setup.

What do you think about the Tilta Hydra Arm Mini and the footage it captures? Do you use camera cranes for your shoots? Let us know your thoughts in the comments section underneath the article.