A new (released early 2020) entry level wireless TX and RX video transmission kit from Vaxis called the Atom 500 is currently on sale until July 18th. There’s also a new firmware update for the Atom 500 and additional sales running on the Vaxis-Storm 2000 and the Vaxis-Storm 800. Details below:

This limited sale is in celebration of the 2000th day of Vaxis existing as a company and the flagship deal appears to be for the HDMI-only Atom 500, but a few other items are discounted until July 18th as well:

A new firmware update landing alongside the sale also promises to fix a few pesky bugs along with other unspecified quality of life improvements for the device. The new firmware for the Atom 500 can be downloaded HERE.

We reached out to Vaxis about reviewing the Atom 500 TX/RX kit in-depth and we’ll hopefully be able to post a review of that device in the coming weeks or months, but this seems like an affordable entry level HDMI wireless video solution based on initial information we reported HERE. The fact that the Atom 500 can send a signal to your mobile device is also an interesting feature that is worth a try. Vaxis claims a delay of .1 second in the Atom 500 transmission, which may make this device tricky for focus pulling, but potentially useful for client or lighting monitors. In short, TBD until we can get the device for testing.

You can find the corresponding iOS app called Vaxis Vision for the Atom 500 on the app store HERE. 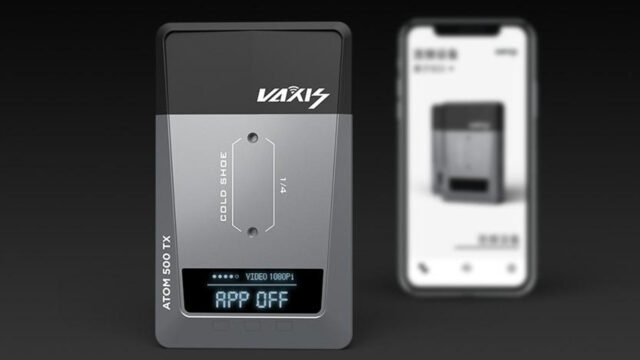 Have you tried the Vaxis Atom 500? We’d like to hear from you! What are your thoughts? Comment below!