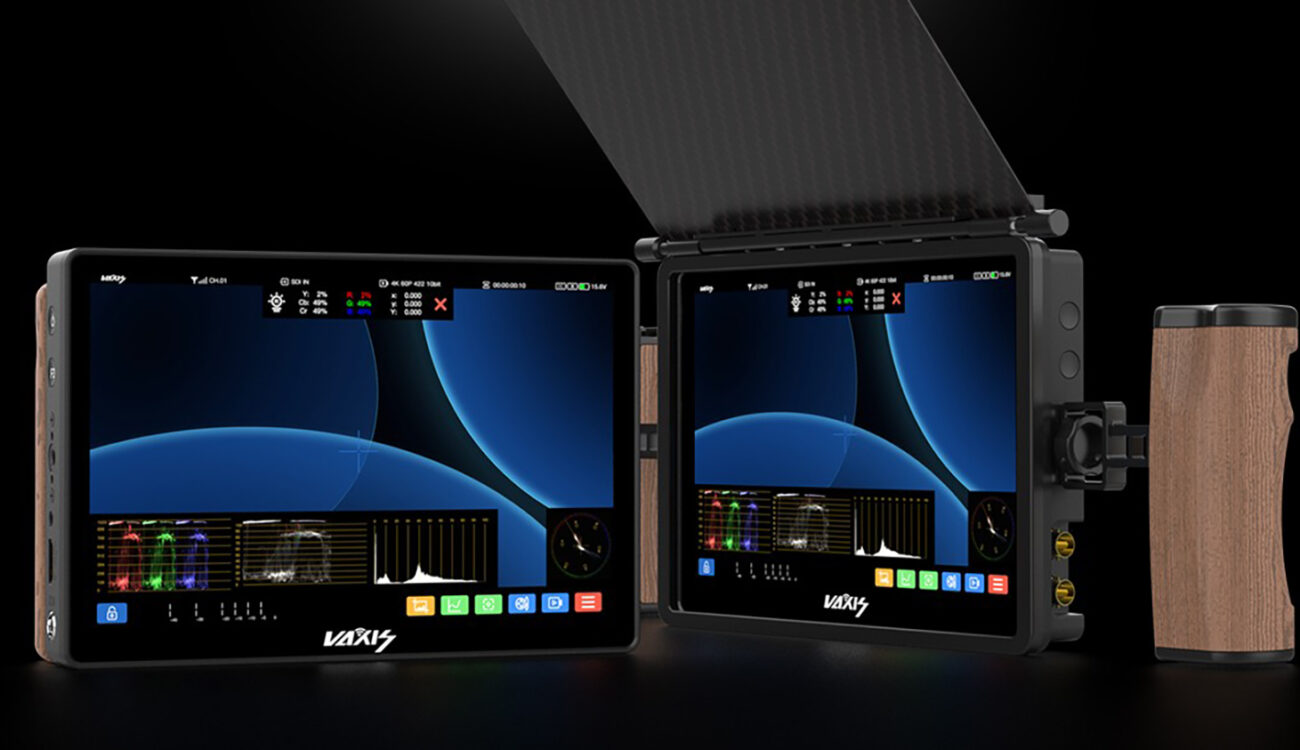 Vaxis, the China-based company offering wireless monitoring solutions, has announced their Cine8 Wireless Monitor. An upgrade to their initial offering with the 7″ Storm 072 Monitor, the Cine8 aims to become a serious competitor. Its spec sheet tics all the boxes and flexes some serious muscle. But in such a crowded market, is the Cine8 strong enough to stand out?

There’s a lot to talk about with the Vaxis Cine8 Wireless Monitor. The laundry list of features, options, and numbers can seem impressive at first, but can also be equally overwhelming. We’ll try to keep it simple and break down everything into hardware and software. With a range of 500ft and a retail price of $3,999, it’s not the cheapest monitor out there, nor is it the first to offer a built-in wireless RX unit. Let’s dive inside to figure out what all the fuss is about.

Hardware of the Vaxis Cine8

Simplicity is the cornerstone of the Cine8’s design. The entire unit is centered around a 1500nit 9″ touch-screen at a resolution of 2560 by 1600 with 330 pixels per inch. This brings it into Retina display territory. However, the monitor uses a 8+2 FRC panel. Frame Rate Control technology only approximates the color reproduction of a true 10-bit panel, so you may want to temper your expectations. While all these features sound impressive, they are manufacturer claims and will need to be verified in the field. The Cine8 also features HDR settings, either PQ or HLG. But, with how inconsistent HDR standards currently are, this may be more of a hinderance to your exposure than a benefit. But, the tool is there for you to use if you need it. Other inputs on the unit include:

The majority of the controls are handled by the touch-screen, so the entire unit only has a few buttons. Power and Function 1, 2, and 3. These can be programed to control a myriad of software-based monitoring tools. In addition to five 1/4-20″ threads around the aluminum housing, you get are a pair of wooden handles on the back, as well as a built-in wireless receiver and five (5) antennas on the top. It’s a sleek design, but unfortunately, all of these physical features come at a cost. The Cine8 comes in at 2.62 lb (1.19 kg), outweighing the SmallHD Cine 7 by more than double. It also has to manage a lot of heat, and while there user-accessible fan settings, they will make some noise. For those that also care about the beauty on the inside, let’s take a look at the 1’s and 0’s.

Software of the Vaxis Cine8

Remember that simplicity we talked about in the previous section? Well Vaxis went in the opposite direction with the software and crammed the Cine8 Wireless Monitor full of everything you could need. Much like the touch-screen, the software package is built around a custom operating system called CineOS. The menu system is well laid out but user of pre-production models have stated that the interface can be laggy. However, things may change in the production units. Remember those function buttons? Here is the laundry list of features they can control:

The Cine8 also has the ability to input two separate signal and display them in split screen. These two signals can be viewed in a variety of forms, while the screens can be repositioned so that one appears larger. Vaxis has also taken some cues from its competitors. A feature called LightMeter allows users to see RGB, YCbr, and Cr values wherever they touch on the screen.

For all of your LUT needs, the Cine8 comes with seven pre-loaded lots that cover Panasonic, Sony, Red, and Canon cameras. If users want to load in their own custom LUTs, the Cine8 must be connected to a computer via the USB-C connection. Finally, users have the option of choosing between three different color spaces: REC-709, DCI-P3, or BT-2020. In addition, there are options to change the Gamma Values and Color Temperature of the display. How accurate these settings are remains to be see, but having the options makes the Cine8 a versatile addition to any camera department.

The right tool for you?

This is the million dollar question we all want the answer to, isn’t it? The Vaxis Cine8 Wireless Monitor is a hefty monster with a bright screen and more settings that you can shake a stick at. Tests on pre-production models have shown negligible if non-existent latency and a very comfortable experience from the 1500nit panel during the day. The Cine8 is also compatible with the Storm Series from Vaxis. Though we have to add that CineD did not test this monitor yet.

The new wireless monitor is definitely capable of handling any production. It’s heavy, expensive, and bursting at the seams with options. But some users might discover that is falls into the category of Jack of All Trades, Master of None. Is it the right tool for you? We can’t wait to find out! Purchase options for the Cine8 are available on the Vaxis website.

What do you think of the Cine8? Is it too much in a heavy package? Is this the monitor you’ve been waiting for? Let us know in the comments!