Sound Devices & Video Devices are known for their great Video & Audio recording devices. The new small 4K recorder they just presented at NAB 2015 seems like an ergonomic dream come true and has a lot of advantages over other products in the market. 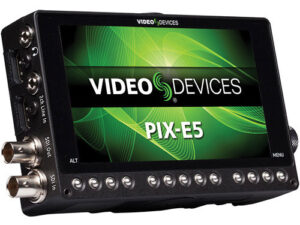 At an affordable price, with affordable media, it seems like this is one device not to be missed. The Video Devices PIX-E5 is compact and gets a 4K signal out of the Sony Alpha a7S among many other cameras. 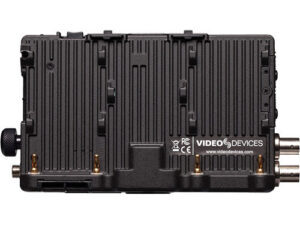 The design is very solid with touch-screen as well as tactile controls. There are many useful features in a bundle that looks and feels very professional. All inputs are locked down, no cables can pop out. 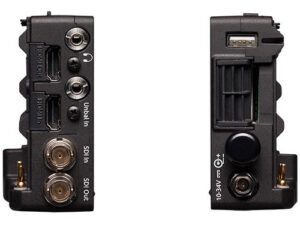 The media solution is really impressive as well. It’s a USB3 enclosure that sits at the back of the device. You can use it with your own M-SATA mini drives and upgrade it at any time later on with affordable and very fast media. The enclosure itself comes with the device and an additional unit costs $59.

We were intrigued by this product, it seems well made all around. The only limitation is the framerate that maxes out at 60p in HD. So no slomo recording with this one. Also there is no RAW, but the Apple ProRes 4444 XQ makes up for it.

The PIX-LR is a screw-on accessory that provides the monitors with two XLR inputs and outputs, featuring mic preamps, LED level meters and dedicated transport and gain controls.

At $1395 this small 4K recorder is much more affordable than an Atomos Shogun for example and at first glance seems better suited to cameras like the GH4 or A7S as well as in terms of usability, but of courses missed the slomo functionality. We will have a comparison between the two devices soon. The competition that is going on in this sector is seriously interesting.

The specs at a glance:

The $1395 Video Devices PIX-E5 is available for pre-order HERE.