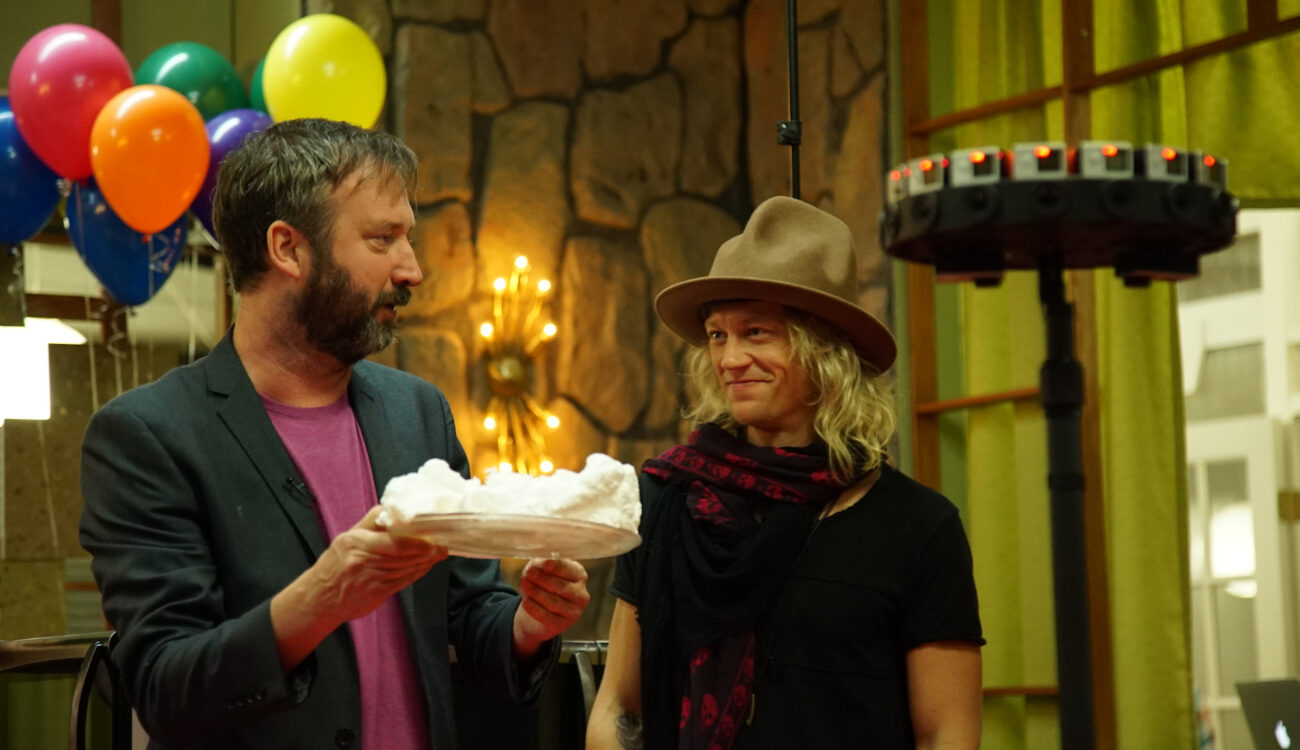 When you receive an invitation to attend a Virtual Reality talk show hosted by one of Canada’s top ten greatest exports—the Tom Green–in front of a live studio audience, you accept the invite, knowing you are in for a wild ride. VR still has a long way to go before it reaches mainstream acceptance, so getting to see it produced first-hand is a treat for camera geeks and directors of photography everywhere. 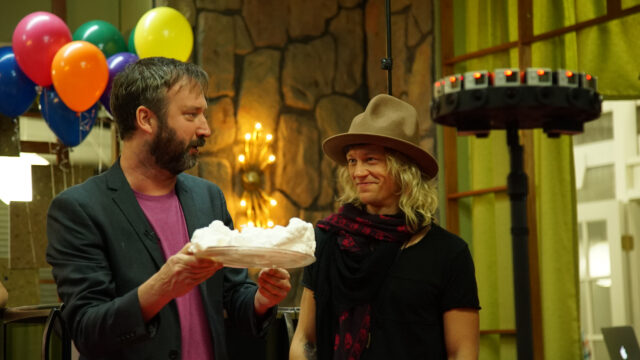 Walking through the nondescript industrial doors of MandtVR in West Hollywood, it’s evident the company has fully embraced the VR phenomenon. Samsung, Google and GoPro OMNI VR abound with monitors displaying that distinctive 360 video image on a 2D plane. I’m nearly the only one in the building with an “old fashioned” two-dimensional Sony a7sII and I make a quick mental note to add a Samsung 360 to my B&H wish list–the first sign of early adopter syndrome. 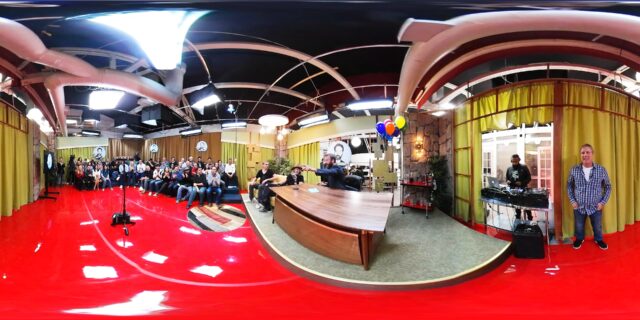 Still of the set from the Samsung 360.

The physical layout of the company is divided into three distinct areas, each devoted to VR: news gathering, post production and, for now, a pop-up talk show set adorned with “360° of Tom Green” 60’s style graphics nestled smack in the middle. Several Samsung Gear 360’s line the perimeter of the set, with a Google Jump rig containing more GoPro’s than your local Best Buy, dominating the center of the space. Everything is lit by large 4-bank overhead daylight kino’s and two Sony fs7 cameras are mounted behind the audience bleachers. Curtains on one wall of the set are pulled back revealing rows of computers that make up the press pit of the news gathering side of MandtVR.

There is a certain energy to the surroundings that you only see in technology startups. It’s easy to tell employees enjoy the process, sometimes the battle, of helping to define the young world of VR. On the topic of company culture, Neil Mandt, founder of MandtVR says, “There’s a sort of duality to making content for virtual reality that lends itself to the startup feel. There are many seasoned entertainment industry professionals on staff, yet the technology we work with is brand new; telling stories is as old as time, but this delivery mechanism has never been used before. We encourage a family atmosphere with creative accountability. I want my team to be inspired to try new things at all times, while never losing the goals of creating quality serialized content.” 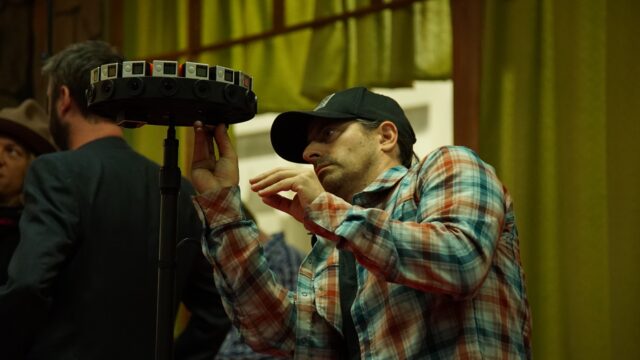 Two dozen crew members are bustling about, mumbling into their walkies and I am immediately struck by how familiar everything seems. Despite the strange looking cameras mounted directly in the middle of the action, the entire operation feels identical to any TV or Film set you might wander onto during a freelance rotation anywhere in LA. I’m not sure what I imagined the set would look like, but when Google Cardboard is a cutting edge standard for viewing VR with your phone, you get the sense that VR still has a DIY component–much like drone cinematography in the days before DJI.

It’s barely five minutes before the studio audience arrives and takes their seats. I ask Neil where a good spot for me to take photos might be–somewhere out of the way (a tricky request with 360 cameras everywhere). He points to the front row and says, “Have a seat.” I hadn’t planned on being quite that close to the action, but he says it in a tone that doesn’t invite dissent: I take a seat. 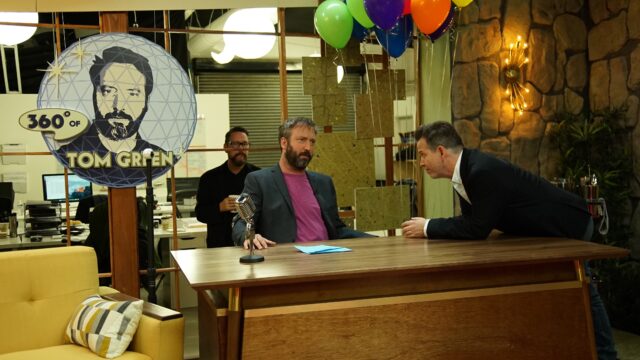 The 1st AD comes out and uses a smart slate to begin syncing… everything. When you have a ton of cameras in the room and you aren’t switching live, you get to use the clapper a bunch. After syncing what feels like two dozen cameras, the show begins. Tom Green, welcomed by applause from the audience, immediately remarks how strange the cameras look. Many people nod in agreement. 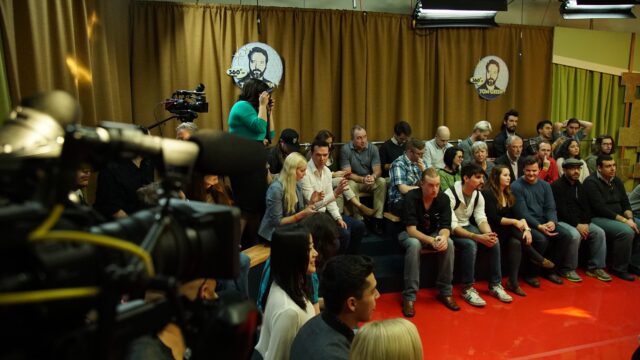 The audience before the show begins.

I don’t want to give too much away of the actual content of the show as it airs on 360 Youtube in January, but let me just say that the picture below accurately describes the type of insanity you are in for when you tune in to the one of the world’s first VR talk shows. 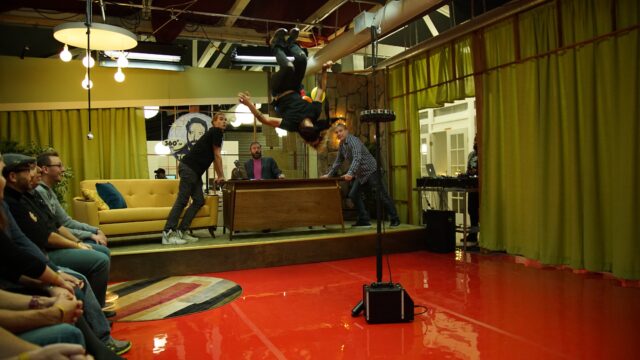 Microwaves, Ivory soap, and facial implants all have prominent roles in the evening’s festivities and the whole thing is goofy, profanity-laced, nonsensical fun. At once point Tom Green, riffing off a previous clip he played, asks me if I have a penis implant. I smile and shake my head. Just a normal day on a VR set.
As an audience member I am very conscious of the fact that at least six of the GoPro’s mounted in the Google Jump rig are pointed directly at me. This is not the type of show where shooting off a quick emoji on your cell will go unnoticed by the home audience.

Tom Green’s guests are The Dudesons from Finland, host Kit Hoover from Access Hollywood and actor/podcast host Michael Rappaport of Sully and Prison Break fame. It’s the eclectic sort of lineup you’d expect from Tom Green: all the guests, each different from the next, are great. 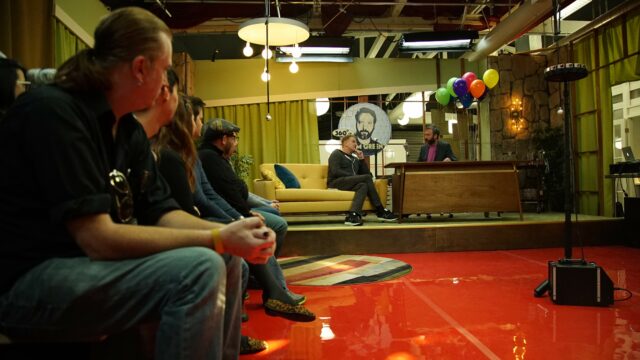 For the most part the taping of the show is uninterrupted, except for short breaks between guests to reset cameras and to iron out last minute staging notes. Occasionally The Dudesons or Tom would get too close to the Google Jump, which I’m told causes issues with blindspots between the cameras. All of the rigs on set seem to be prone to overheating and members of the camera team were constantly checking them. The Google Jump was even switched out for a backup Jump system when a technician became concerned about the heat. The backup system had its own hiccup when the red record lights turned off at one point, but the GoPro’s kept recording.

All the guests congratulated Tom on his new show and wished him success in his new venture, but the truth is that virtual reality is still very much the Wild West. Manufacturers are throwing their hat into the 360° camera ring and new stitching software and content is popping up everyday–with varying degrees of quality. Once all the tech hurdles are cleared, we find Joe and Sally American on their couch, each wearing a VR headset. The biggest questions for MandtVR and for the industry as a whole are: will Joe and Sally tune in? And will it be in large enough numbers for this gamble to pay off? Neil Mandt believes they will: “We are in the beginning of what I believe will be the last medium. Think television in 1949, internet 1993 or smart phone 2006. VR will bring the best of those mediums together and will develop into something that will change the way humans interact and consume media forever.”