Virtual Reality is a big business, not just in creative content production but for capturing images that would otherwise be in challenging environments. VROX Technology has been designing and engineering the VR Robot System for the past year, and it was truly impressive to see it at IBC 2017.

The image capture aspect of the VR Robot System is handled by an array of Sony UMC-S3C full frame low light cameras (which uses the same sensor as a Sony a7S – watch our news video from NAB about  the S3C here), which after research into the best control and size options became the camera of choice for VROX. To also create the correct field of view across the array, the Voightlander 15mm F/2.8 lenses are used which capture a very high quality image with little to no edge distortion, vignetting or chromatic aberration. When stitched together, the resulting images are seamless, with no visible loss of quality. This also replicates a field of view that resembles human eyesight for a more realistic experience. 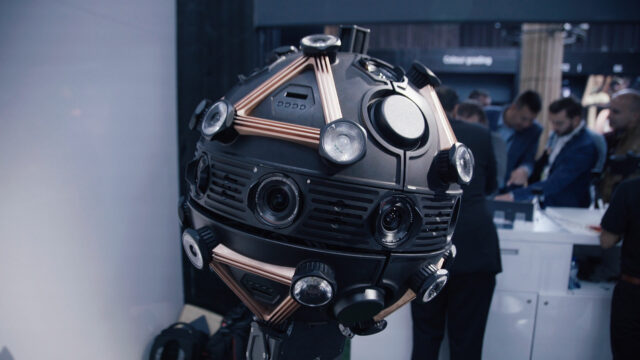 Each Sony UMC-S3C in the VR array can be controlled independently, which makes the rig perform exceptionally well in a variety of shooting environments from HDR to low light. The independent control of the cameras allows the exposure settings of the cameras at different sides of the array to be set according to the needs of the lighting, including when the robot is travelling from a low light to bright light environment.

The ideal productions that would use the VR robot system include the gaming world and film productions that are implementing virtual reality content to really immerse the viewer into the image – and by moving the VR rig on a robot making it easier for the crew to hide while shooting. The on-board 360 degree microphone also captures the ambient sound of the environment. Other applications that can use the system lie in the e-commerce world for online shopping and location shooting, all of which are emerging as VR moves from wide fisheye and medium to low quality image capture to a higher quality of production.

24 LED lights also surround the VR array that can again be independendly controlled in situations that need a light source, this eliminates the challenge of rigging lights around the environment that will either be out of sight of the VR cameras or removed in post production.

The VROX VR Robot System is not a static unit; it can move around a space, is wide enough to fit through doors, and the head unit will move and orientate to keep the horizon line level when traversing over difficult terrain. Unfortunately we couldn’t demonstrate this fully at the Sony b0oth due to space, but previously the VR Robot System has been used to move through warehouses and shop floors completely independently. The battery life of the system can also last for 8 hours, which for remote operations is ideal. The system can also be remotely operated through an encrypted VPN tunnel from the other side of the world, if necessary.

Due to the specialism of this technology, it is not available to purchase, only to rent through VROX. The rental package comes as a complete production crew with a camera and lighting operator.

Although this VR solution is not on the spectrum for many of us, it is fantastic to see companies like VROX Technology developing innovative new solutions in emerging markets like VR, and partnering with companies like Sony to move the technology in the industry forward.

Would you like to experience the truly realistic virtual reality environment captured by the VROX Technology VR Robot System? Let us know in the comments.