Zhiyun-Tech – a company that took the handheld gimbal market by storm – have teased their latest gimbals: Crane 3 LAB and Weebil LAB.

The Zhiyun-Tech Crane 3 Lab is the successor to the ever popular Crane 2 gimbal, and it has a big redesign, going from a vertical grip underneath the gimbal to a hand grip set back and below the roll motor. Zhiyun-Tech listened to the users and designed the Crane 3 LAB to move into the underslung mode with ease, through this new design.

The rear grip also houses the gimbal control buttons and the batteries (3 are required), which remain the same as the Crane and Crane 2. Battery life is expected to be around the same as with the Crane 2, estimated at 18 hours, if balanced correctly.

The front of the grip now features a built in zoom rocker and rotating dial which is used for iris control. Although the Crane 3 LAB does have a focus dial, this isn’t built into the handle, which would have been a very good improvement for one- or two-handed operation. Instead, the focus control dial is located underneath the gimbal, and requires a separate hand to operate.

It should be noted here that the payload should be roughly 4.5kg, but this is not confirmed yet, and the gimbal with a large DSLR body and, in this case, a fast prime lens was rather heavy to hold with one hand. Like the Crane 2, the Crane 3 LAB will also ship with a small tripod, which now has rubber on the exterior, making it an additional hand grip. 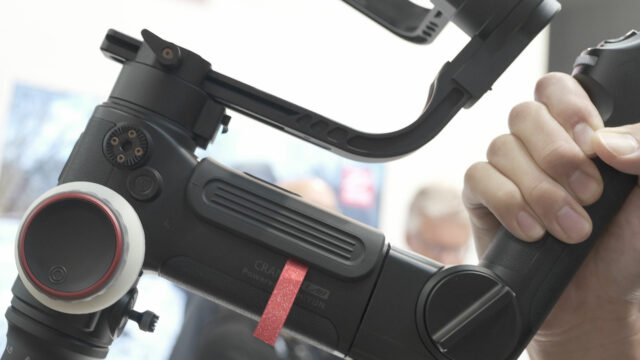 A new innovation for the gimbal is the image transmission box underneath the camera plate that contains a  HDMI port for wireless image transition to the Zhiyun-Tech app. The app can then track subjects and act intelligently with the motion of the gimbal. USB ports for camera control are also included, but this is limited to Panasonic GH4 and GH5, and Sony a7 cameras for now.

A very neat feature not mentioned in the video are the three motor/axis locks. When correctly balanced, users can lock the positions in place, so that even if the gimbal is powered down and packed away or transported, the balance settings remain the same, when using the same camera and lens combination. This saves the pre-shoot balancing that can be a pain when filming in a run and gun situation.

The same Manfrotto standard camera plate is also integrated into the new Crane 3 LAB, which is ideal for switching between gimbal and a tripod or monopod.

The next product Zhiyun-Tech are launching is the Weebil LAB, which is a new line for mirrorless cameras, and the official release will be at Photokina in a couple of weeks time. We’ll be there to cover the news from that release at the show.

Are you looking to upgrade your gimbal to the Crane 3 LAB? What features from the new gimbal interest you? Let us know in the comments!