Last year at NAB  Zoom has launched the F8n, a professional-grade multitrack field recorder with great build-quality and advanced features like the Look-Ahead Hybrid Limiters, Zoom’s AutoMix, great preamps, timecode in/out and lots more. Now the Zoom F6 field recorder sports the same preamps as the F8n did, with the added benefit of being able to utilise dual A/D converters and record in 32bit, instead of standard 24bit, thus making setting levels and clipping a thing of the past. Information is somewhat limited at this point, but here’s what we were able to find out. 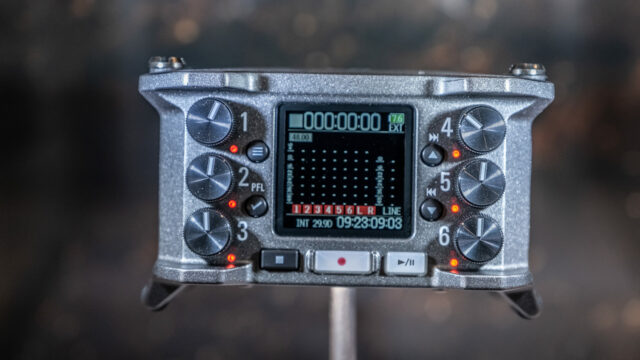 The Zoom F6 is not as big in size as you might think. In fact, it’s tiny!

The Zoom F6  has six  XLR-inputs and features the same very low noise-floor preamps found in the Zoom F8n (−127 dBu EIN). There is a line-out, a headphone output with a tiny volume wheel and  a timecode in/out (again this is the same as in the F8n. Not continuing the similarities the F6 only has a single SD card slot. Powering the Zoom F6 should be rather easy, given all the options the unit offers: the F6 can either be powered by four AA batteries, USB-C or an L-Series  battery, for which their is a built-in mount on the unit’s backside. The front of the unit  is dominated by six faders, a tiny yet informative LCD and three main buttons to controle recording and playback. The unit can also be connected to Zoom’s Bluetooth adapter and will work with Smartphone app interface as well as Zoom’s F-Control panel. The Zoom F6 will record 6  tracks, as well as a  stereo mix, so 8 channels all in all.So far so good. The Zoom F6 seems like a nice little six-input recorder.

Now this is where the Zoom F6 really shines. Without going into too much detail, the way the dual A/D converters are set up, it will be nearly impossible to clip the recordings coming off the Zoom F6 – meaning the the preamp just won’t clip. That by itself is a great feature to have. But additionally, this virtually non-clippable sound will then be recorded in 32bit float, instead of the long-time industry standard of 24bit. 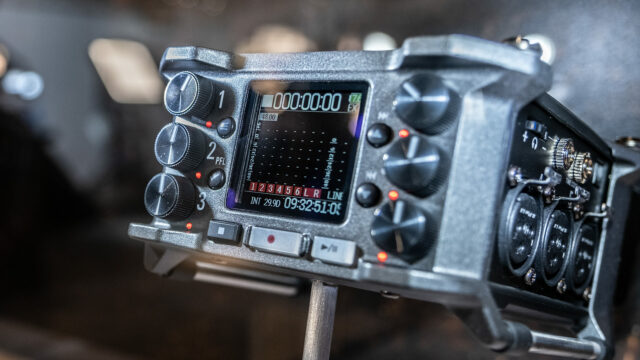 While 24bit can have  great audio quality there is one inherent problem: louder volumes will be recorded at better quality than lower volumes. In practice this can translate into a situation that many of us have encountered before: You record at a set gain level, and then the person starts whispering. Now you’d have to raise the gain, introducing noise. But with a 32bit recording everything would be recorded at the same quality level, no matter the volume, due to the immense dynamic headroom. On the other end of the spectrum, clipping would be really hard to achieve even you tried it on purpose and even if something clipped on output, you could bring it back down in post, similar to how highlight recovery works with RAW video: the spectrum of data recorded is larger than the available output range, that you can push the signal around more easily. 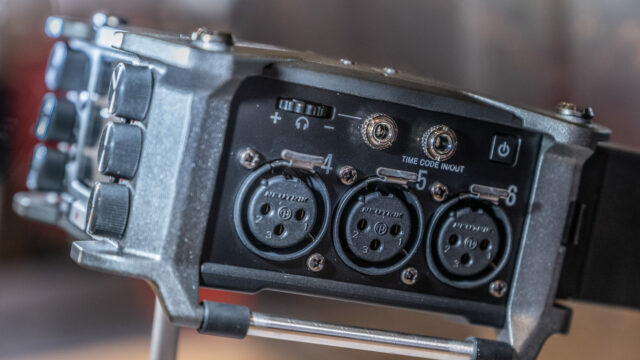 The Zoom F6 is also supposed to be able to record 32bit float to all of its tracks, while also recording 24bit files as backups simultaneously. You can also choose to only record 24bit and use the Advanced Look-Ahead Hybrid Limiters, known from the Zoom F8n.

In May we should see some more detail on the Zoom F6 emerge, together with some information on pricing. The unit should be available during the latter parts of  June according to officials from Zoom.

Are you excited about 32bit float recording and getting your hands on this ground-breaking new field recorder by Zoom? Let us know what you think in the comments!