Zoom – the Japanese company famous for their portable audio recorders – just announced an upgrade to the Q2n audio-video recorder: the Q2n-4K. This device looks like a musician’s best friend, let’s take a look at what improved. 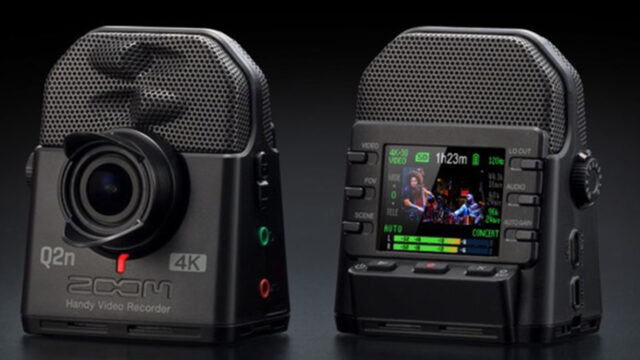 This camera is made primarily for musicians and not filmmakers, allowing them to capture their stage performances, rehearsals and even make small music videos in 4K without having to lug kilos of audio and video gear. It could have been an excellent camera for vlogging, but it lacks a flip-out screen. 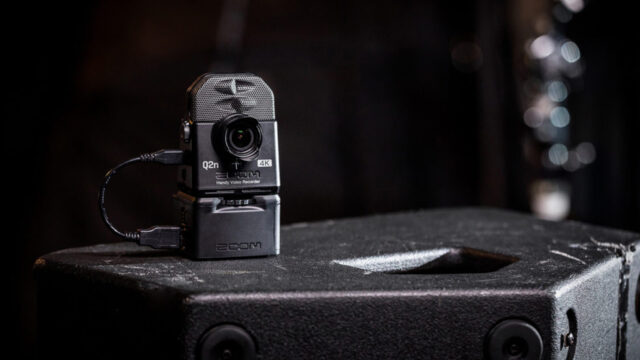 Let’s dive a little deeper into the technical specifications of the Q2n-4K. The camera features a wide-angle (150 degrees) F2.8 lens, a digital zoom, auto gain control, HDR technology, and automatic exposure adjustment. It records MPEG-4 (MOV) files onto microSD / SDHC / SDHX card and can capture images in 4K up to 30 fps (as well as 720 and 1080p). You’ll have the choice between five different FOV options if you want to make your shot wider or tighter. Also, the camera offers 12 predefined scenes to help novice users to better adapt to different lighting.

Thanks to two microphones configured in X/Y (120 degrees) that overhang the lens, you’ll be able to capture stereo sound. The microphones are pretty robust as they can handle loudness up to 120 SPL dB. If you only want to record the audio, you can do it in WAV up to 24bit/96kHz.

The Q2n-4K is Mac and iOS compatible as an audio interface, and 4K webcam on macOS. Also, you can live-stream on social networks. 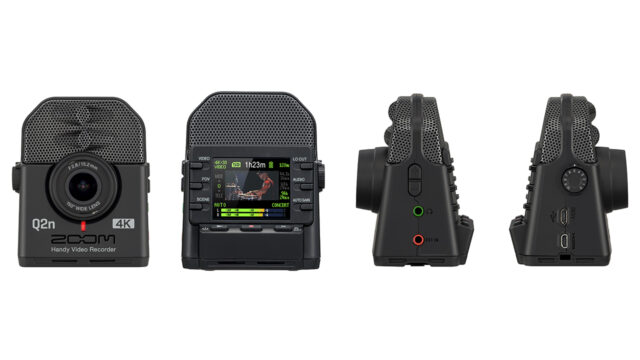 On each side of the screen, there are six buttons in total: 3 for the video settings on the left, 3 for the audio settings on the right. Each button gives you access to the corresponding sub-menu: Video/FOV/Scene and Lo-Cut/Audio/Auto-Gain.

At the bottom of the screen are three buttons for the essentials Play/Record/Stop functions.

On the left side are the headphones control, a 3.5mm jack input, and output. On the right side, you’ll find the micro-HDMI output and the micro-USB port that you can also use for powering the device. Speaking about power, the Q2n-4K runs on 2 AA batteries, that should provide power for around 2 hours.

A mono speaker is integrated, in case you need to check that you recorded the sound, but don’t expect a proper quality sound from it. 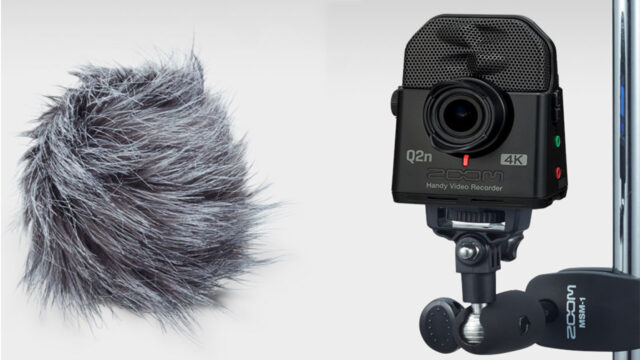 When purchasing the Q2n-4K, it only comes with a lens hood, the lens cap, and two AA batteries. A wide range of accessories is already available to expend the device usability, including:

The Zoom Q2n-4K should be available this month, and you can already pre-order it.

What do you think about the specs of the Zoom Q2n-4K? Do you think it’s useful for musicians? Let us know in the comments down below!