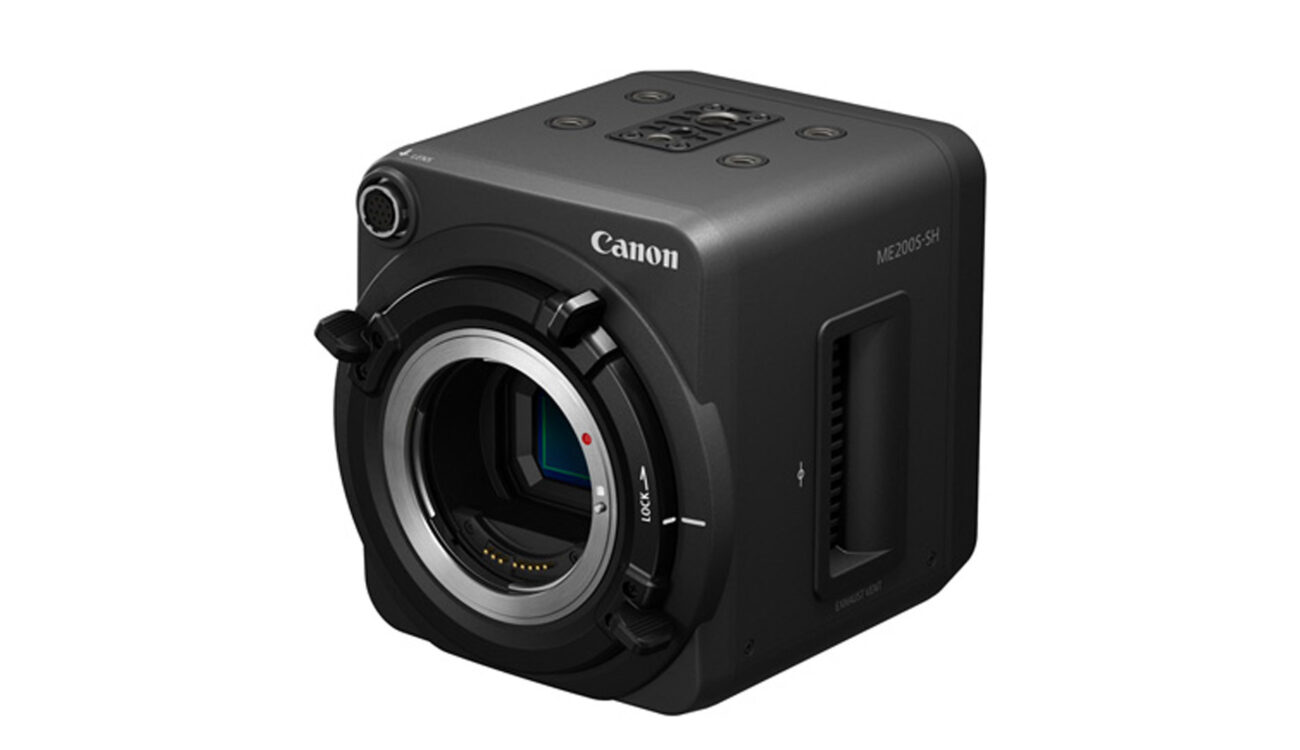 The ME200S-SH is Canon’s new cube-shaped Super35 C-Mos sensor camera. It might remind you of the super low-light Canon ME20F-SH, announced at IBC 2015 and which was priced at $20,000. This version takes up the same shape and form, but its features resemble more a down-sized Canon EOS C100 Mark II. 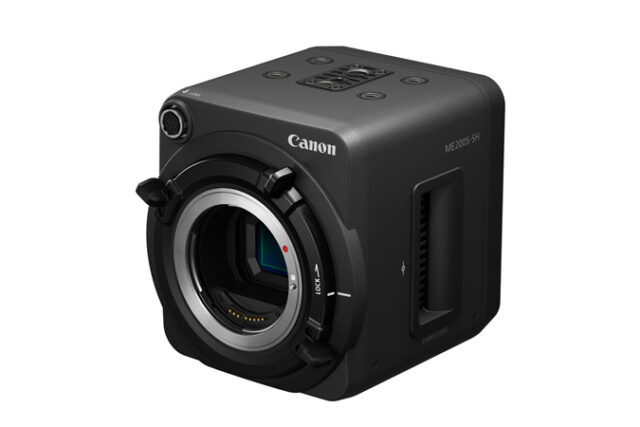 The shape of the Canon ME200S-SH resembles that of a camera previously released at IBC2015. The trend is clear: small form factor, and light-weight for the drone and gimbal market. In order to compensate for making things small and compact, a lot of important modules are left out, such as internal recording, a viewing platform and easy access to menu buttons. What we are given here is basically a sensor with some output modules. Its like Apple’s latest Macbook: same price, but you have to buy additional components to make it work for you. But enough complaining: let’s get into the nitty gritty to understand what is going on here. 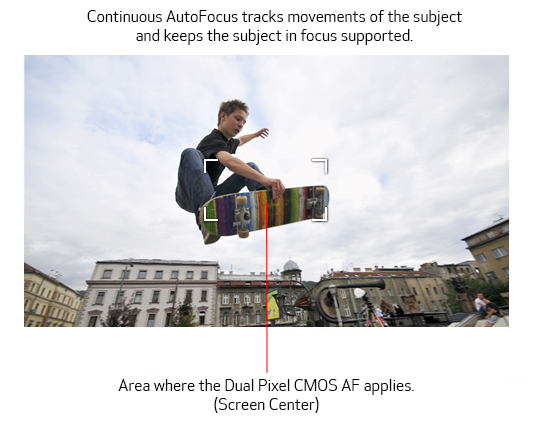 The Canon Me200S-SH is an HD (1920×1080) Super35 camera. Canon’s Dual Pixel CMOS Autofocus (DAF) system works to maintain focus of moving subjects, and ISO shooting up to 204,800 makes it a versatile tool for handling difficult or low light shooting scenarios such as filming wildlife at night. It shoots HD up to 50p/59.94p and uses the same Canon Log found in its more professional range C-Series camera, enabling it to capture up to 12 stops of dynamic range. This allows it to retain details in the brights through to the shadows. The camera can be controlled using Canon’s optional RC-V100 remote control, further expanding the potential uses of the camera. 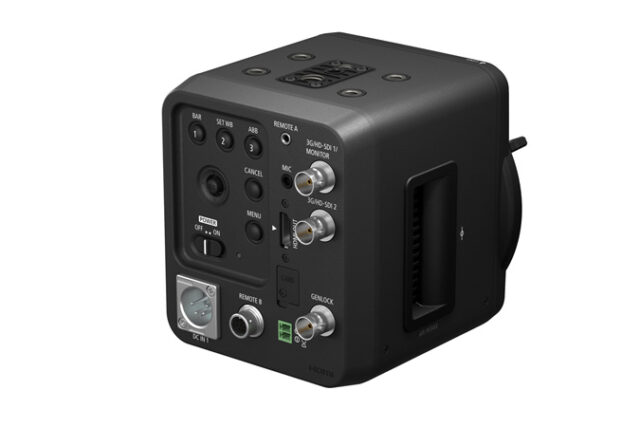 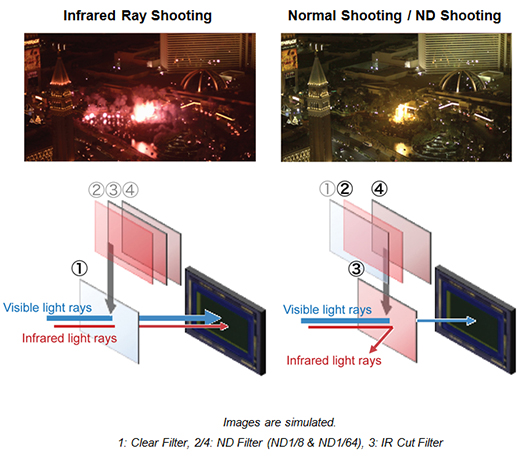 The ME200S-SH camera is also supplied with two built-in neutral density filters, a 3-stop (ND1/8) and a 6-stop (ND1/64), allowing the operator more control over the amount of light hitting CMOS sensor. The ME200S-SH camera features an IR cut filter that can be removed for infrared shooting. During typical daylight shooting conditions, the IR cut filter is used to block unwanted IR light to help ensure color fidelity and reproduction. In extreme low light conditions, removing the cameras IR filter allows IR light to reach the camera’s sensor, enhancing the camera’s ability to identify objects within the scene. Uniquely, the IR functionality of the camera allows for color reproduction, increasing the ability to recognize and differentiate objects.
The removable IR cut filter is incorporated with the ND filter stack, allowing the IR cut filter to be activated in the same way as the camera’s ND filters. 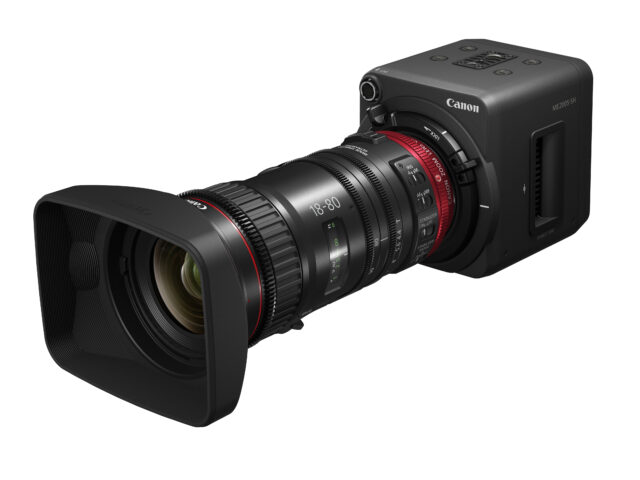 Another nice feature is the lens locking system, which allows lenses to be attached or removed without the need to rotate the lens barrel. At the front of the camera, a 12-pin lens terminal supplies power to the drive unit of Canon’s CINE-SERVO and COMPACT-SERVO lenses, as depicted with the new Canon 18-80mm compact servo lens. Zoom, focus and iris can be operated remotely when used with Canon’s optional RC-V100 remote control. Canon’s 2/3″ broadcast lenses can also be connected with a third party adapter, but remote operation is not guaranteed.

The Canon Me200S-SH is an attempt to rectify the previous Me20F-SH camera, which would have set you back $20000. This camera has a few more features, an IR filter that can be cut at the push of a button, built-in ND filters and generally a solid design. It would be very useful for wildlife filming, where space and light is critical and you don’t have the possibility to access the camera, for instance if you happen to need to film a hedgehog in its burrow. If Canon could incorporate 4K into this camera, I would consider it. Wildlife is all about documenting our environment in the best possible format. There is room for improvement, and this surely will be an exciting camera to follow in the next coming years.