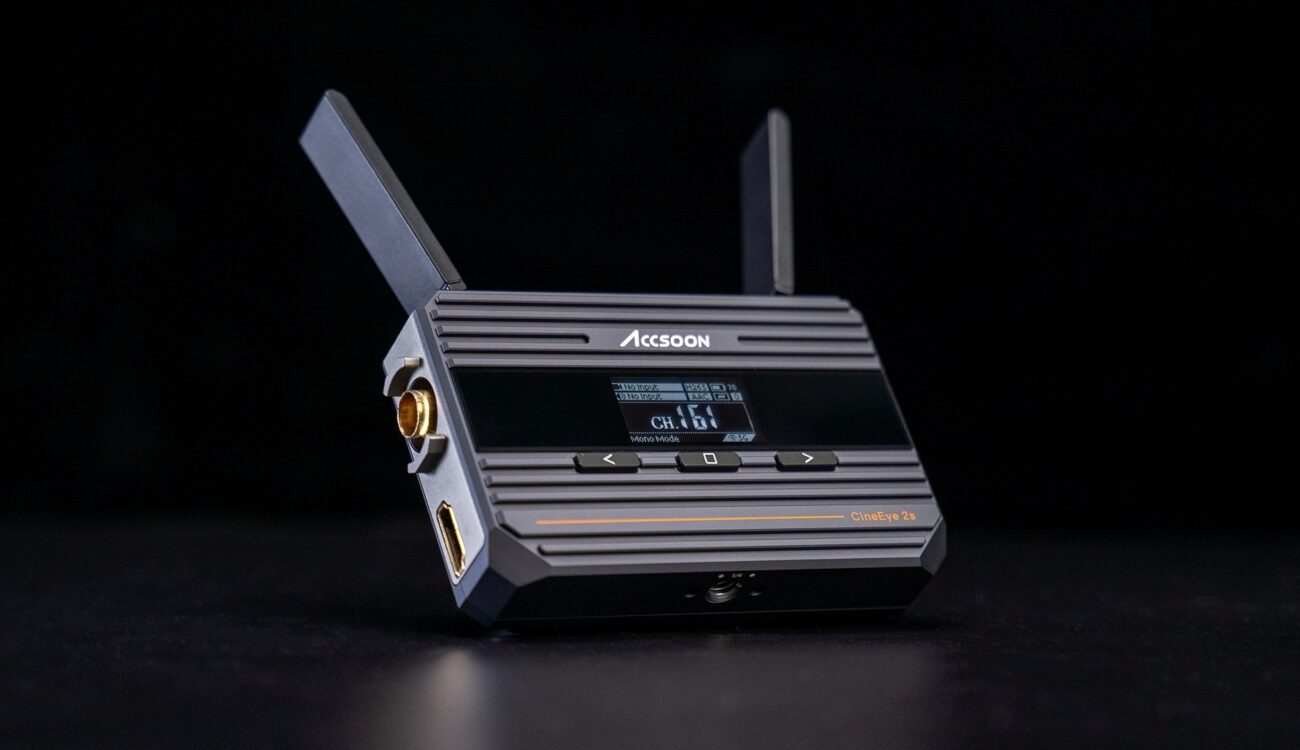 The CineEye 2S is an affordable 5GHz wireless transmitter for SDI and HDMI cameras that can send low latency (less than 60ms) 1080p 60fps video signal up to 150m for up to 4 iOS and Android devices. Powered by Sony NP-F batteries or DC barrel input, the CineEye 2S is available now for $329.

Back in 2019, Accsoon refreshed the wireless video transmission market segment when they announced the affordable HDMI wireless video transmitter called CineEye. At the end of last year, the Chinese company announced the second generation of CineEye wireless transmitters with two different products – Accsoon CineEye 2 and Accsoon CineEye 2 Pro (which, in fact, is a set of RX and TX). Recently, Nino talked with Accsoon representative Adam Duan about the new line and especially about the CineEye 2 Pro, you can (re-)watch that video here:

During the interview, Adam mentioned that an SDI version of the Accsoon CineEye 2 is in the works and should be coming soon. Well, that time is now. Let’s take a short look at the newly released Accsoon CineEye 2S.

The CineEye 2 works on a 5GHz frequency and it offers both SDI and HDMI video inputs. It can transfer up to 1080p 60fps video signal with a range up to 150m (approximately 500ft). The low-latency feed (less than 60ms) can be viewed on up to 4 iOS or Android devices. Once connected to the smartphone, the Cineeye 2S can also stream using Youtube or other content delivery networks via RTMP.

At startup, the CineEye 2S uses automatic frequency selection to select the cleanest channel from up to 20 available. According to Accsoon, by choosing the frequency with the least resistance it will be less prone to signal interference. The channel can, however, also be selected manually if desired.

The Cineeye 2S also streams the embedded audio accepting 44.1KHz/48KHz 16bit/24bit inputs which it then transports using a low compression codec for nearly lossless sound monitoring. A 1.3″ OLED display shows the status of the Cineeye 2S at all times. The settings can be adjusted via the Accsoon Go app or with the physical buttons on the device itself.

The CineEye 2S body features an all-metal construction with a fanless design and two foldable antennas. The 1/4″ thread on the base of the unit features additional ARRI style anti-rotation holes. The device offers up to 14 hours of runtime with a single NP-F970 battery. Alternatively, it can be powered via a DC (7.4-16.8V) barrel connector. Interestingly, if both power inputs are used in combination, the battery can even be hot-swapped without having to power down the unit.

The receiving devices use the free Accsoon Go app for iOS and Android with useful features like pinch to zoom, user-selectable LUTs (presets for popular camera Log types or even custom user LUT), peaking, false color, waveform, histogram, and blue only display. The interface allows users to rapidly switch between setup menus and a totally clean uncluttered view of the image. There is also support for masks for different aspect ratios, and for anamorphic lenses with 1.25x, 1.33x, 1.5x, 1.78x, and 2x de-squeeze options.

The app also allows users to send Rec/Stop commands to a range of popular cameras, but it requires having an appropriate accessory cable. At the moment this is available for Sony A7/A9 series, Canon EOS R/5D IV, Panasonic GH5/GH5S/S1H, Nikon Z6/Z7, Fuji X-T3 and others.

The Accsoon CineEye 2S is available for purchase now. The price has been set to $329 (in Europe around €269 plus VAT). That is $80 more than the HDMI version, but can still be considered quite affordable in my opinion.

Do you have experience with any of the CineEye devices from Accsoon? What do you think about the new CineEye 2S? Let us know in the comments section underneath the article.